The Sophisticated Whimsy of Sara Edgar 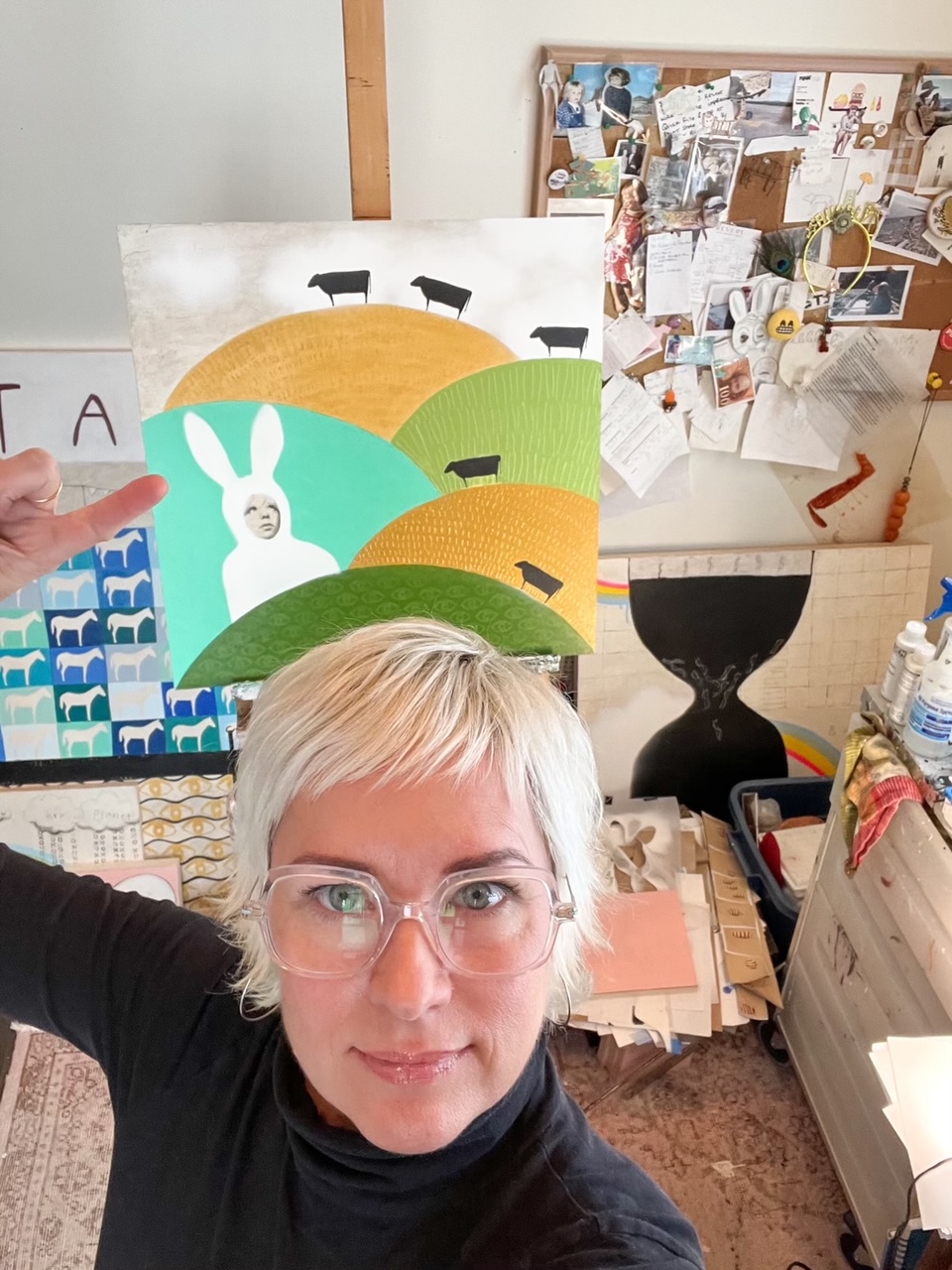 Spotting the work of local artist Sara Edgar is as delightful an experience as spotting the real life counterparts of the subjects she depicts. At first glance, her body of work is all play and whimsy: kittens and sweethearts, bunnies and rainbows, all basking in pastel hues or juicy shades of punchy color, provoking from us a childlike wonder, a wide-eyed naivety.

Upon closer inspection, however, each work reveals a narrative element that hints at something deeper: an undercurrent of sophisticated, hard-earned lessons beneath the youthful exuberance — commentaries on time, money, power, and the nuances of life. This seemingly oxymoronic balance of sophisticated whimsy speaks to the artist’s creativity and talent as she explores the simplicity and simultaneous complexity of life through her work.

We at Gallery MAR are excited to welcome Sara Edgar and her work to our gallery. In our first conversation with the local artist, we discuss her vocation for a creative career, her journey to finding her media and style, and how she leaves room for the viewer in her narrative work.

Gallery MAR: How and when did you first know that you wanted to make art your profession?

Sara Edgar: Initially, I went to college for a few years, but I found that it wasn’t working for me. I took a break and worked. When I returned to school, it was with the intention of doing something creative, but I was more so still looking for a vocation, so I went into an Interior Design program. While in the program, I met a professor in a drawing class who one day looked at me and just said, “You are not going to be an interior designer — you’re going to be an artist.” He just came out and said it. It was the craziest thing. I had never thought about going to school for art so it was really a transcendent experience.

Gallery MAR: Did you have any formal art training or were you just so creative that he saw it in you?

Sara Edgar: I think he just saw it in me. I never had any formal art training. My mother was an artist — a clay artist — so growing up we always did art projects, but it’s not something I thought I would do. When that professor said that to me, it changed my entire trajectory. That resulted in me going back to the University of Washington where I graduated with a Bachelor of Fine Arts in Metal Design. At the time, my focus was on creating small-scale sculptures in jewelry.

Gallery MAR: What drew you to metal design originally? 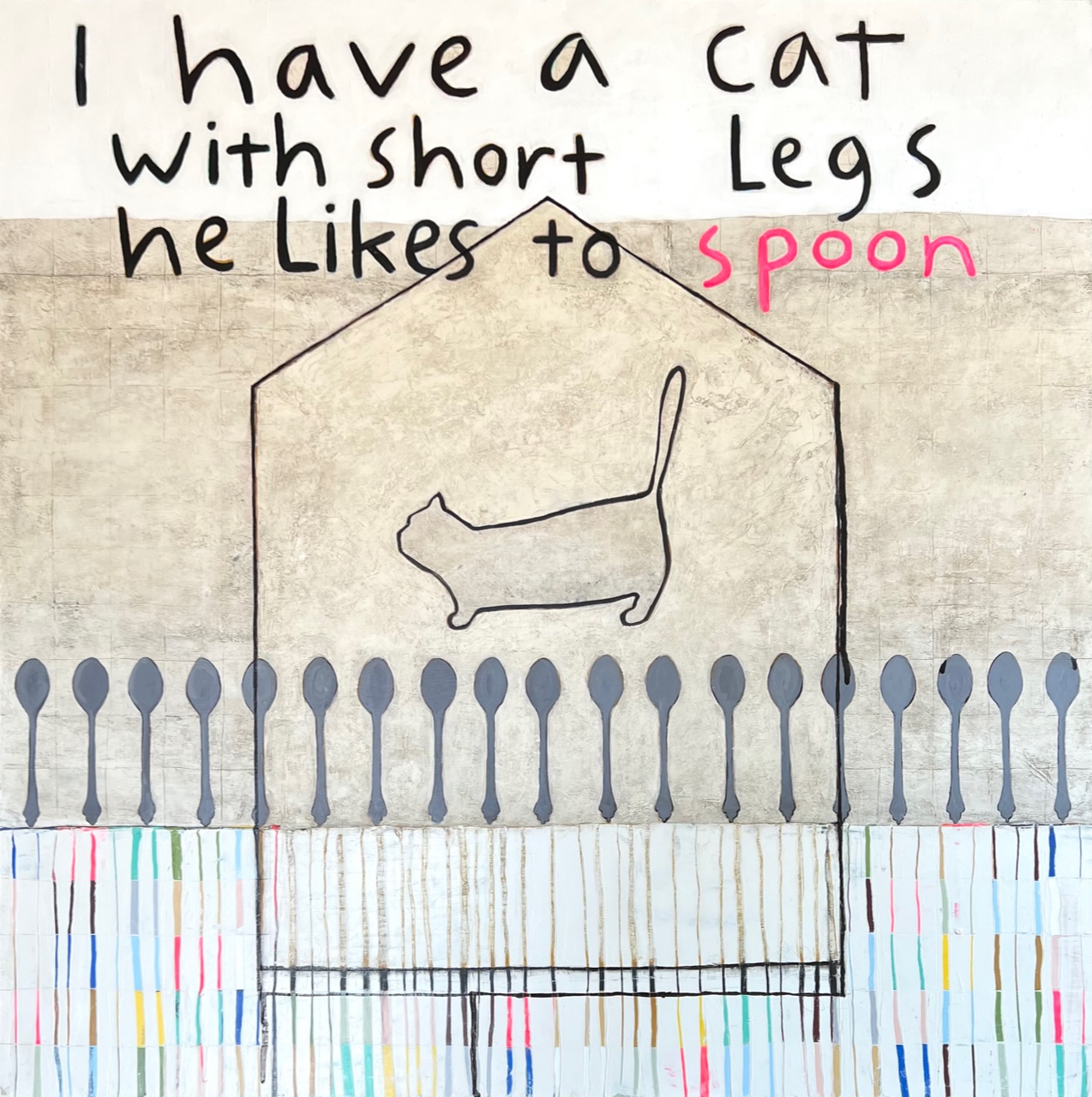 Gallery MAR: Growing up seeing your mother as a 3-D artist, it makes sense for you to picture that a little bit more easily. So how did you discover your love for 2-D art, particularly acrylic paint and mixed media?

Sara Edgar: After graduating, I was working in metalsmithing and metal design. I had some work in a gallery when I lived in Seattle. Then I had kids. Having children made me take a little break for a while, especially considering that I was mostly making art with torches and such at the time.

I also happened to move to the East Coast for a while during this time. When I was making my way back to the West Coast, I felt like I needed a form of artistic outlet that I could do while also raising little kids. So I found painting, and I thought, “I’m just gonna try this and see what happens.” Painting and doing mixed media really activates your right brain. You can really lose yourself in it, and I found that I really enjoyed it and, ultimately, found a voice that worked for me.

Gallery MAR: So it sounds like you’re entirely self-taught when it comes to painting? How incredible! Besides the safety of the material compared to metalsmithing, what is it about acrylic and mixed media that made you fall in love with it and stick with it for so long?

Sara Edgar: I’ve always worked in a narrative way, and with painting, I was able to find a language that worked for me. It really evolved over years of working with painting. The questions were always: “How do I get across my narrative? How do I say what I want to say?” Figuring out how I could get that across was intriguing for me, so I kept going.

Gallery MAR: Could you talk a little more about the narrative quality of your work? What initially drew you to a more narrative style?

Sara Edgar: Initially when I was working with metalsmithing and design, I worked narratively. That’s why I called it “small-scale sculpture,” because it was jewelry-sized sculpture. It’s challenging to picture if you don’t see it, but once you see it, you get it. (See image of jewelry art above)

In painting, I want my work to initially draw in the viewer with color and recognizable, accessible imagery, but upon closer inspection, there are underlying themes that might not be immediately apparent. Since life is so nuanced, I’m looking to portray that nuance in my work. The work I’ve been doing recently is of bunnies and rainbows and such, but when you really look at it, it’s not quite about those things. I like to play with that. 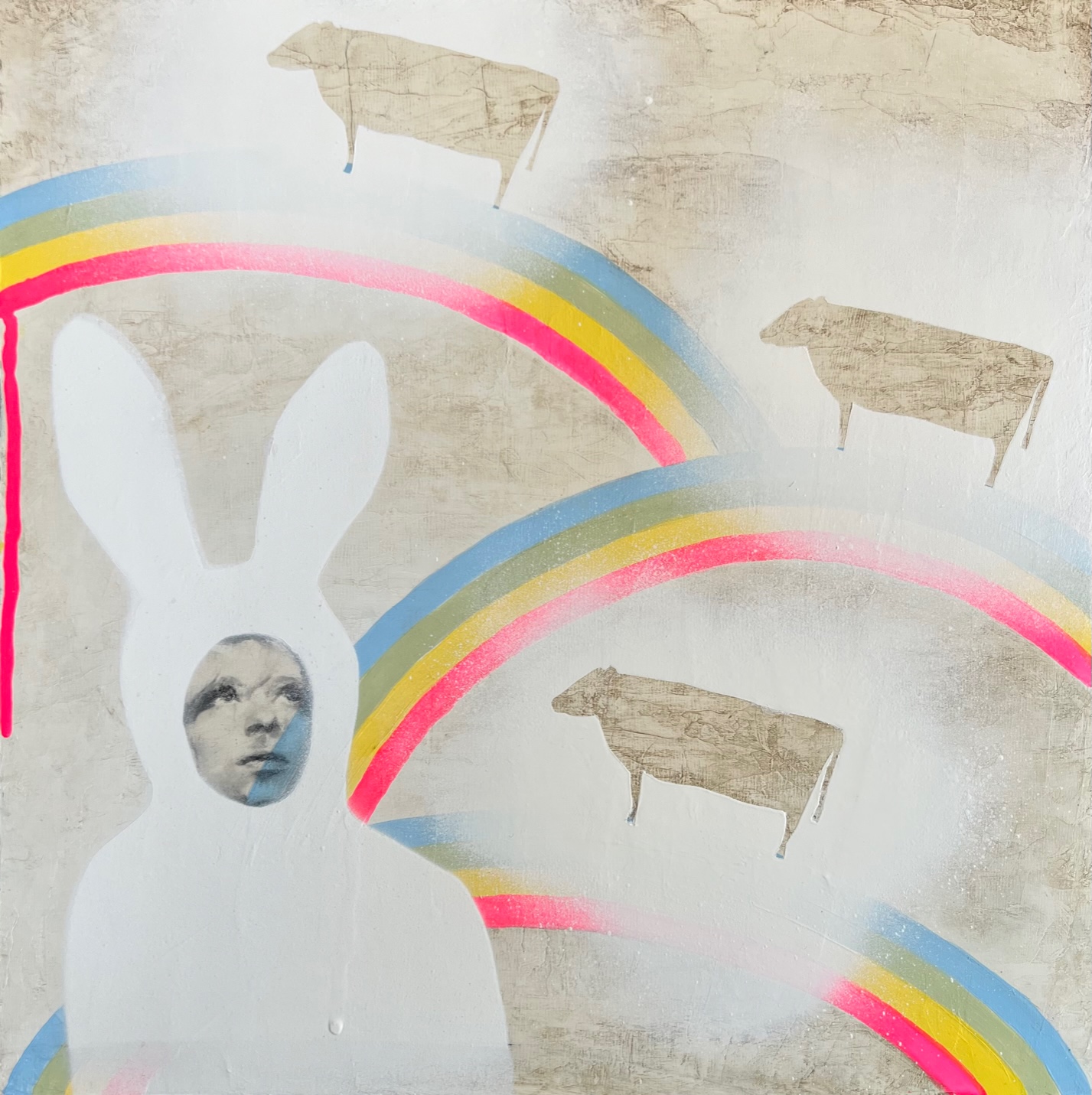 “The women in my work wear bunny suits because they’re disguising themselves and protecting themselves, which is something we do in life.”

Gallery MAR: That love of the narrative is readily apparent in your work.  Within it, there’s a delightful blend of whimsy and sophistication. Those tones almost feel oxymoronic, but they blend so beautifully together in your work. What inspires this unique style?

Sara Edgar: Since it’s my work, it’s obviously going to be inspired by my personal experience, but I hope that the themes in my work feel universal. It’s about human experience: the struggle just in the everyday. I think that’s another reason why I want to use accessible imagery.

For instance, with the bunnies, they represent a disguise and protection. The women in my work wear bunny suits because they’re disguising themselves and protecting themselves, which is something we do in life. It’s really an all-encompassing representation of our everyday struggles and our anxieties.

Gallery MAR: I really love these repeated motifs in your work, like the bunnies. It seems that time is also a repeated motif in your work, whether represented by hourglasses or tally marks on a wall. Could you talk a little about these motifs and their inspiration?

Sara Edgar: The tally marks and the hash lines represent counting. At Gallery MAR, you have a painting called “Keeping Score.” I have two children, and I feel like, as they were growing up, they were always keeping score of who gets what, who does what, who has what, etc. It was just that competition, and I think that we just do that in life. That’s why I like using hash marks.

In some of the work that I do, I wallpaper the background in X’s & O’s. When texting came about, people were using lots of X’s and O’s and that just became so trite. X’s and O’s are representative of love and kisses, and I just found that it became wallpaper instead of real emotion. I also put them in my work now because there’s always love in the background.

Gallery MAR: I also noticed that you use a lot of playful word art. Could you talk a little bit about that?

Sara Edgar: I love using words in my paintings. I tend to make a lot of lists, and I write down words or phrases that I think are interesting, however obscure. If those words or phrases fit into a piece, I love to put them in there, because I love using text. I hope that the text that I use is open-ended enough that people can connect with them on their own level. 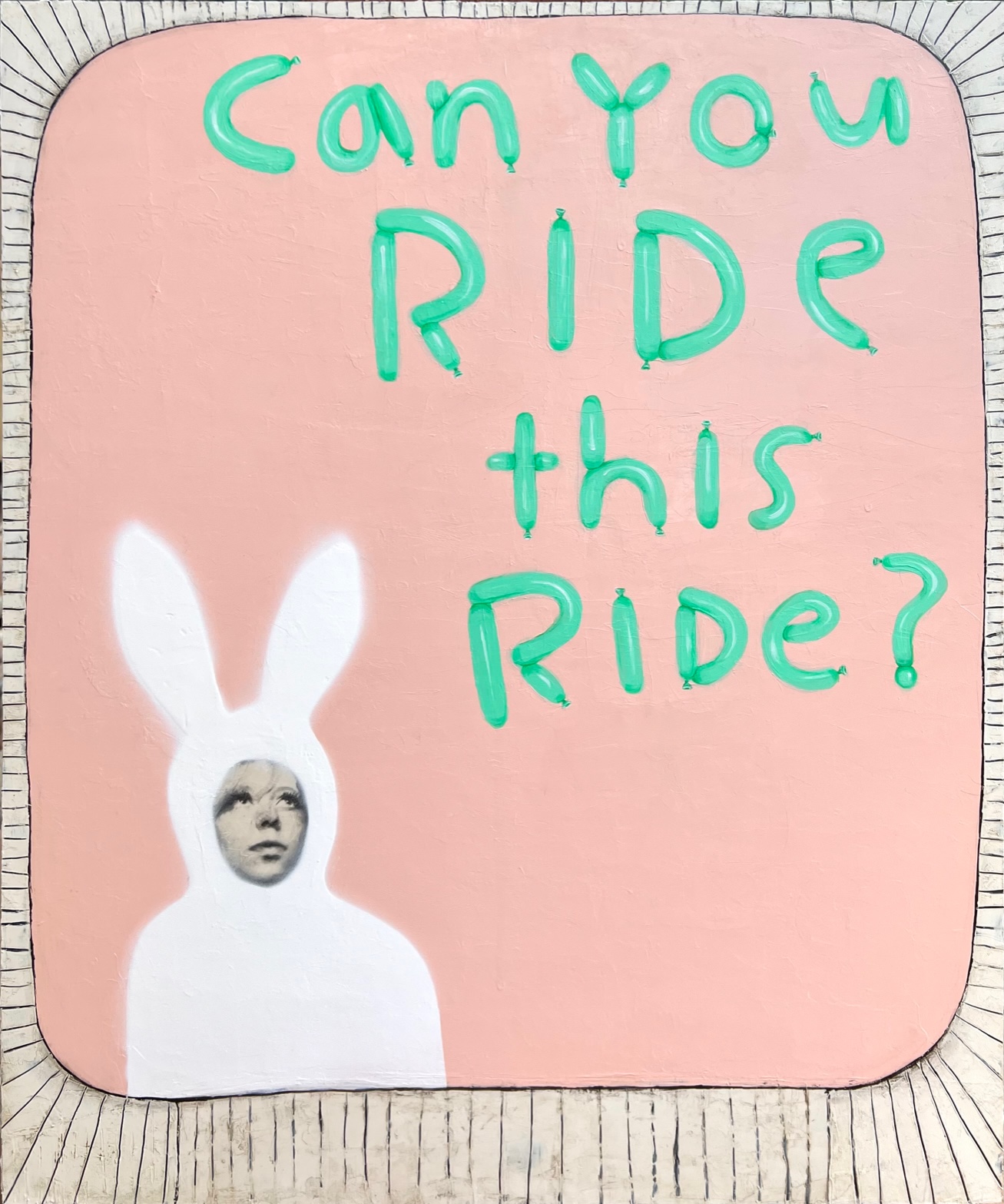 Gallery MAR: I think that it adds an element of intrigue and even mystery that goes along with your narrative element. Particularly I love the text in the work, “Can You Ride This Ride?”

Sara Edgar: To me that phrase says everything. When you go to an amusement park, they have those height measurements with the question beckoning, “can you ride this ride? You have to stand there and see if you’re tall enough. I’m only 5’ 2”, so I’m short. I could never ride the rides for a while, and I love that metaphor.

Gallery MAR: That piece is a great example of your unique color palette as well. Your work often juxtaposes stark, high contrast blocks of black and white with more playful shades of pastel and off-primary colors. It’s such a unique color palette. Could you talk a little bit about that?

Sara Edgar: I don’t want to get bored with color, so I really try to experiment with unexpected pairings. I’ve looked at a lot of art, and I used to work at an art gallery, so I spent a lot of time staring at a lot of art, and I just got intrigued by color pairings. I’ve been playing with that a lot lately. I love the color pink, but I don’t want the color pink to be or feel gendered. Sometimes as an artist, you think about the viewer or the clients and what they would like in their home. Then, sometimes, I throw all of those thoughts out the window, and I think to myself something like, “I wanna paint pink paintings. Let’s just see what happens.” I have a few paintings with a fluorescent pink in them just as a pop of color, and I like that boldness. It’s an experimentation. I want to see where it goes and how it’s received. I want people to have an open mind about color.

Gallery MAR: What are you most excited about in the studio right now?

Sara Edgar: I’m looking forward to continuing to follow the bunny’s journey and see how some animal imagery from past works may reappear in new work moving forward.

I’m also really excited to be working with Gallery MAR. I really like Gallery MAR’s engagement with the community, from their social media to the events they host. I just really like the involvement. I’m really looking forward to the season here and seeing how it goes. I have very high hopes.

Written and interviewed by Veronica Vale