An Artist in the Medical Field

Chances are you have never heard of anaplastology. It is a branch of medicine dealing with the prosthetic rehabilitation of an absent or disfigured part of a human face or body. An anaplastologist is a skilled artist devoted to creating ears, eyes, noses and fingers for people in need. With permission and anonymity, I am sharing the story of a woman who was suddenly faced with the surgical removal of half her thumb.

My friend Cindy moved to Utah in 2019. Several years prior, she visited her dermatologist in Atlanta, GA about a mole at the base of her thumb nail, but was told “It’s nothing to be alarmed about.” Her follow-up visit at the University of Utah Medical Center last year did raise alarm bells when they saw the mole had encroached into the nail bed. It was a malignant melanoma requiring immediate amputation of the top half of her thumb. She was devastated.

Today, there is no evidence of the procedure — due to the artistic talents that are evident in her prosthetic thumb tip created by the only anaplastologist in the state of Utah. That artist is Paul Tanner, who works at the Huntsman Cancer Institute in Salt Lake City. 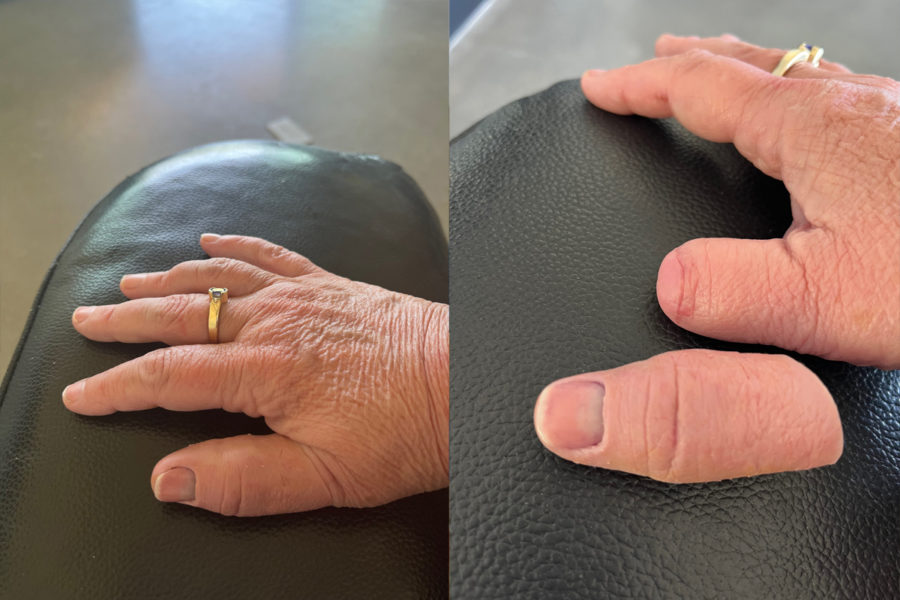 Anaplastology is the science that reproduces a prosthetic part of the human body or face that has been lost to accident or disease. An anaplastologist is an artist in the medical field. A few months after surgery, my friend has a near perfect prosthetic thumb created by Paul Tanner at the Huntsman Cancer Institute in Salt Lake City.

Paul had an epiphany — an artist can bring healing and wholeness to those suffering from trauma or disease.

Here is the fascinating story of a freshman art student who graduated with a Bachelor’s degree from the University of Utah Medical School.

When Paul Tanner was a teenager, he accompanied his uncle, who had lost an ear to cancer, to Texas for a prosthetic ear procedure. Paul had an epiphany — an artist can bring healing and wholeness to those suffering from trauma or disease.

As a freshman art student at the U., Paul came across a brochure called “Design Your Own Major.” The Art Department wasn’t interested in sponsoring his career path in anaplastology, but the doctors in the Dermatology Department at the U. of U. Medical School were very excited and sponsored him. “They were willing to take a chance on me,” says Paul, who then combined art classes with anatomy, physics, chemistry and social work courses. 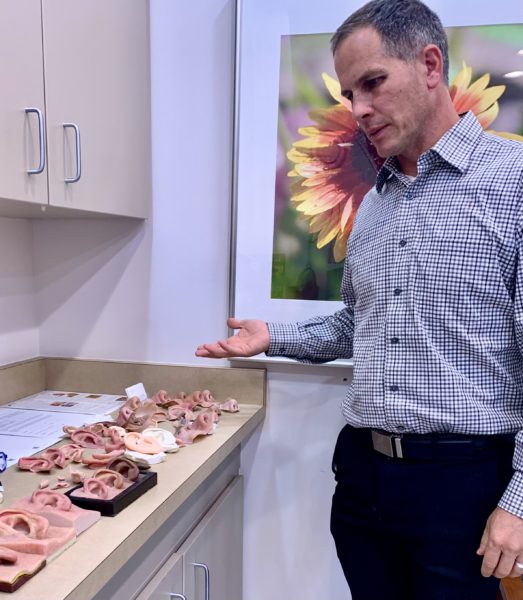 Paul Tanner, MBA, CCA, is the only anaplastologist in the state of Utah and practices at the Huntsman Cancer Institute at the University of Utah in Salt Lake City, Utah. He specializes in facial prosthetics. Tanner began his studies in art at the U but graduated from the U. of U. Medical School with a bachelor’s degree combining art and anaplastology.

After graduating, the only Master’s program in the country where Paul could continue his studies was at the University of Illinois. However, their program offered little ‘hands-on’ experience, so Paul stayed at the U. and worked in the Dermatology Laboratory with the dermatologists and their patients in need of anaplastology. He also completed an MBA there. Paul’s services were Pro-Bono for patients who could not afford the procedure otherwise. At first, the process to sculpt an ear would take about 12 hours and 7 or 8 prototypes. Now, he sculpts the perfect ear in about two hours, though the process begins with hours of 3D modeling and printing. The Huntsman Cancer Institute hired him full-time in 2002.

There are only about 100 anaplastologists in the U.S.  An artist who makes only artificial eyes is an Ocularist, and there are more of those specialists. Paul Tanner is one of the few who creates both eyes and prosthetics. 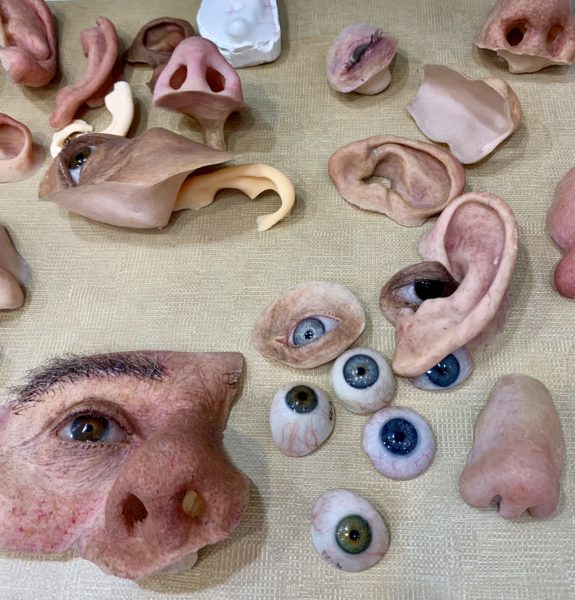 Facial prosthetics and eyes are made from silicone. Designing, sculpting and coloring are learned over many years of study and practice. It takes a special kind of artist devoted to his art and to each patient in need.

How are these made? Prosthetics are created in silicone. Powdered pigments are then mixed with the silicone to achieve the perfect skin tone. The colors can fade over time, and red tones fade faster and need retouching every 2-3 years. A nose will last about 5 years before it needs repair. An ear costs under $4,500 without insurance, but is often covered by insurance. 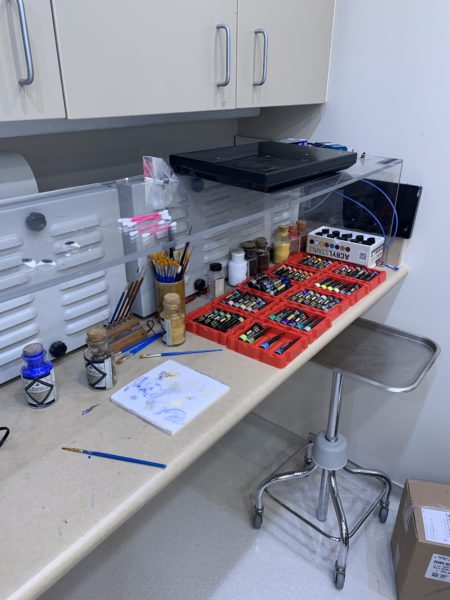 Paul Tanner’s office and studio at the Huntsman Cancer Institute at the University of Utah. Special powdered pigments are mixed with silicone to get the flesh tones perfectly matched to each patient. Retouching may be required after 2-3 years. 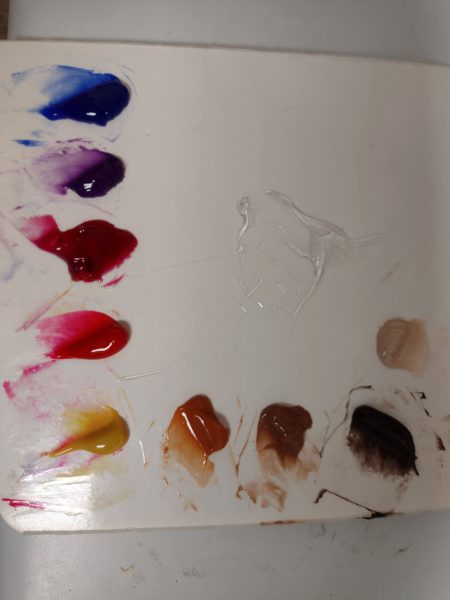 The color palette of an anaplastologist. The mixed pigments stay soft for a few hours. Younger skin is more difficult to match than older skin, and reds fade faster than other hues.

Paul travels once a year to impoverished countries to work with children and adults who would otherwise never have the blessing of being made whole again. Paul humbly admits, “I can’t do what God can do.” There is great satisfaction and some frustration to his work. Younger skin is much more difficult to match than older skin. He sees about 55 patients a year with 70% being cancer patients.

Today, Paul enjoys large-scale painting and sculpture as an outlet outside of his daily work. He has published his research and methods and doesn’t pursue patents for his discoveries, but instead believes the information should be available to others in his field for the benefit of their patients without extra burdens.

Though it was difficult to revisit the traumatic events of the last year, Cindy has been courageous to share her challenges. She said, “There’s one thing I’ve realized. You are only limited by what you think you can’t do.” Cindy introduced me to another valuable asset in the Salt Lake Area, Jeff Soelberg, a volunteer who assists those who have suffered this recent type of loss. He meets with patients through The Amputee Coalition of America, the Hanger Clinics, who provide medical devices for amputees, and the U. of U. hospital network. He’s working on a book that tells the stories of amputees he has met along the way.

Jeff Soelberg himself lost three fingers in a work-related accident in 2016 and knows firsthand what other amputees are going through. “I remember lying in the hospital bed at the University of Utah missing 60% of my hand wondering what life was going to be like going forward — being a father, husband and breadwinner. Because of that I have chosen to help others.” You can find Jeff on social media at Jeff Soelberg (@jeffsoelberg) or Jeff Giving A Hand (@jeffgivingahand).

We hope this information has educated you about self evaluation of moles on your fingers and toes and the understanding and assistance you can offer your friends and relatives who may be facing this overwhelming situation. There are so many ways to be an artist, and we are grateful to Paul Tanner for choosing this profession!