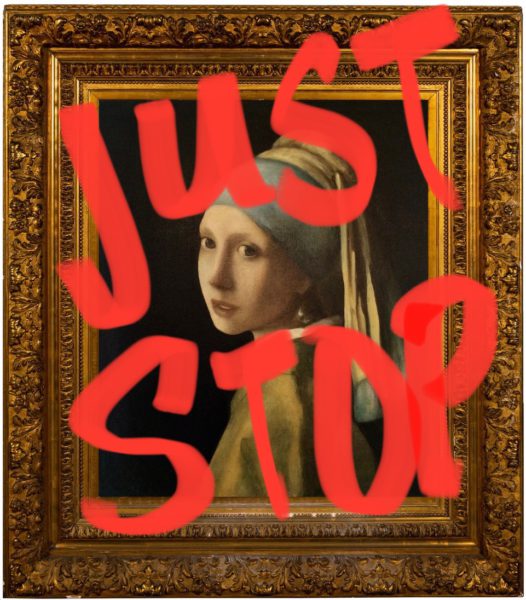 Three Belgian climate activists from JUST STOP OIL BELGIUM glued themselves to the painting and wall and threw red soup at Johannes Vermeeer’s “Girl With a Pearl Earring,” hanging in the Mauritshuis Museum, The Hague, on November 2, 2022. This is my copy of the famous Vermeer with my sentiment. Though attacks have thus far only targeted paintings with acrylic shields, the frames do not escape damage from paint, soup, mashed potatoes and superglue. Eileen Treasure, Manager Gallery MAR

The statement comes as world leaders meet at the COP27 climate summit.

Following weeks of increasingly frequent actions by climate activists targeting works of art in museums around the world, the National Committee in Germany of ICOM, the International Council of Museums, has issued a statement to address the vandalism.

Rather than tackling the question of whether the actions—throwing foodstuffs at paintings or gluing body parts to frames—are effective at pressing government officials to enact real climate policy, the statement mainly addresses the potential damage to artworks.

The activists, the letter reads, “severely underestimate the fragility of these irreplaceable objects, which must be preserved as part of our world cultural heritage.” The signatories continue, “As museum directors entrusted with the care of these works, we have been deeply shaken by their risky endangerment.” Nonetheless, the statement ends by emphasizing museums as sites for “social discourse.”

In response to these demonstrations, museums have been beefing up security measures. Berlin venues and the Museum Barberini in Potsdam are now requiring visitors store jackets and bags in lockers. Since news of the actions is often spread via social media, Beate Reifenscheid, chair of ICOM in Germany, told Artnet News that soon, cellphones and cameras may be confiscated as well. Last month, museum guards at the Musée d’Orsay were able to thwart an attack when they noted a woman in a “Just Stop Oil” shirt entering the institution. Protesters have also been fined and sentenced to jail time, though it’s not stopping further actions.

The protests and ICOM’s letter come as more than 90 heads of state and representatives from 190 countries meet in Egypt for COP27, the 2022 United Nations Climate Change Conference, to address pressing issues of global climate change.

Read the full statement below:

In recent weeks, there have been several attacks on works of art in international museum collections. The activists responsible for them severely underestimate the fragility of these irreplaceable objects, which must be preserved as part of our world cultural heritage. As museum directors entrusted with the care of these works, we have been deeply shaken by their risky endangerment.

Museums are places where people from a wide variety of backgrounds can engage in dialogue and which therefore enable social discourse. In this sense, the core tasks of the museum as an institution—collecting, researching, sharing and preserving—are now more relevant than ever. We will continue to advocate for direct access to our cultural heritage. And we will maintain the museum as a free space for social communication.

Two of the Belgian activists involved in the Vermeer attack have been found guilty of destruction and “open violence” against the painting. They each received a two-month jail sentence. The third activist awaits trial for the same charges. The prosecutors had demanded four-month sentences, saying they wanted to send a message that “paintings hang in museums to be enjoyed, not exploited for activist ends. You keep your hands off them.”

I would gladly volunteer to stand guard at a potential target.  These actions cause museum closures, drive up the cost of admission, necessitate more time-consuming body and bag searches before entering the museum, and may require you to check your bag in the future including cameras and cell phones.

Isn’t this bad behavior just making a lot of enemies of their cause?