Here at Gallery MAR we enjoy a fairytale as much as any romantic. But if it involves one of our artists? Love! We spoke with Slonem’s team a few years ago about this transformational space and crossed our fingers that the deal would come through for Slonem. Now that it is a part of his collection of homes and estates, we look forward to seeing images of the finished 68,000 square foot castle — which will now doubt earn its own book, too. 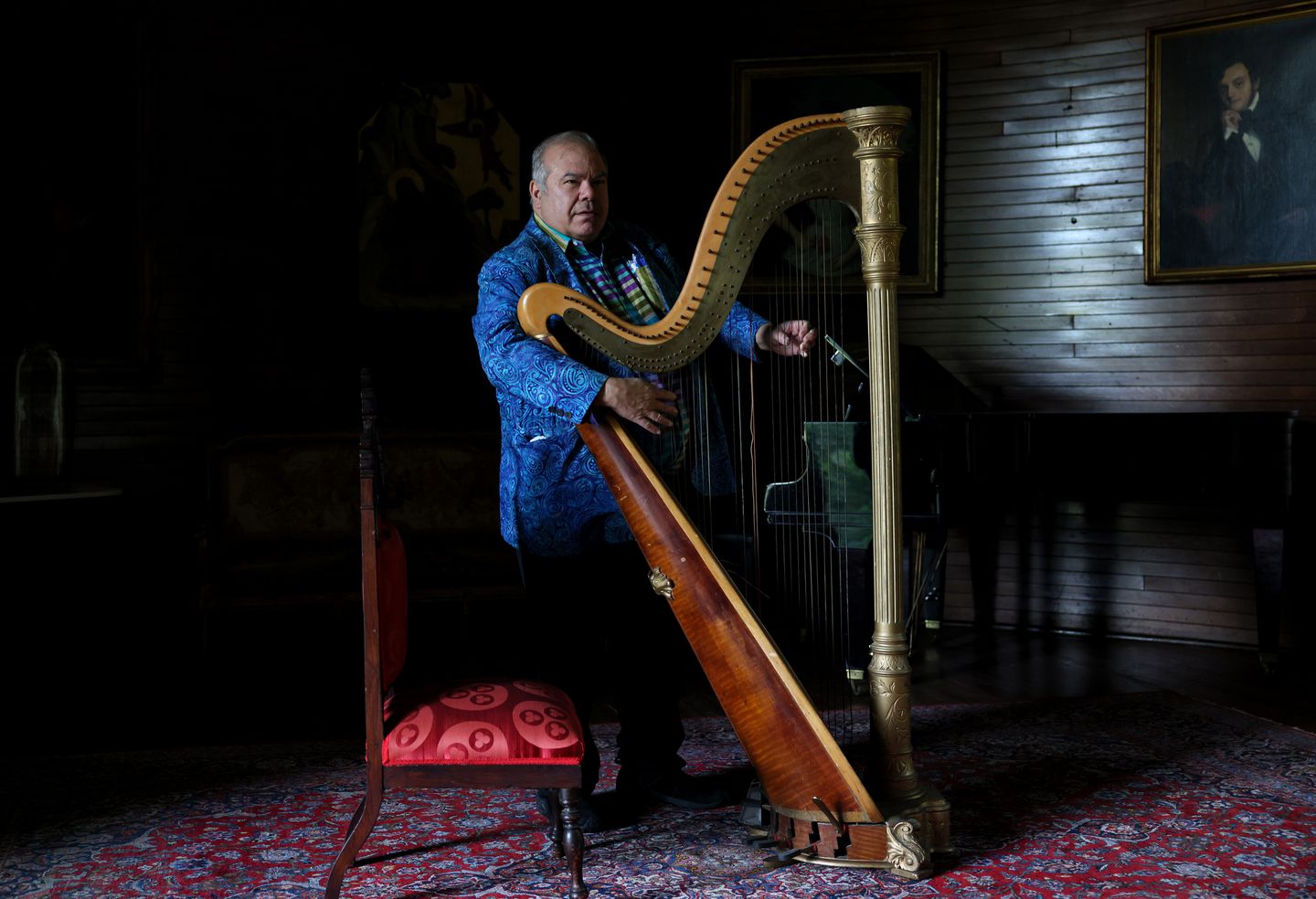 Artist Hunt Slonem poses for a portrait in the music room of his Great Barrington estate. Photo by Jessica Rinaldi of the Boston Globe staff

Great Barrington — “Once I see something I love, I can’t release it from my mind,” painter Hunt Slonem said. Even — or maybe especially — if it’s a castle. Last year, the New York-based artist bought Searles Castle in Great Barrington. Designed in the 1880s by Stanford White of McKim, Mead & White in the French Chateau Style, it’s an audacious example of Gilded Age tastes.

Searles Castle, also known as Kellogg Terrace, sits behind a stone wall along Main Street here, on 64 acres that stretch down to the Housatonic River. 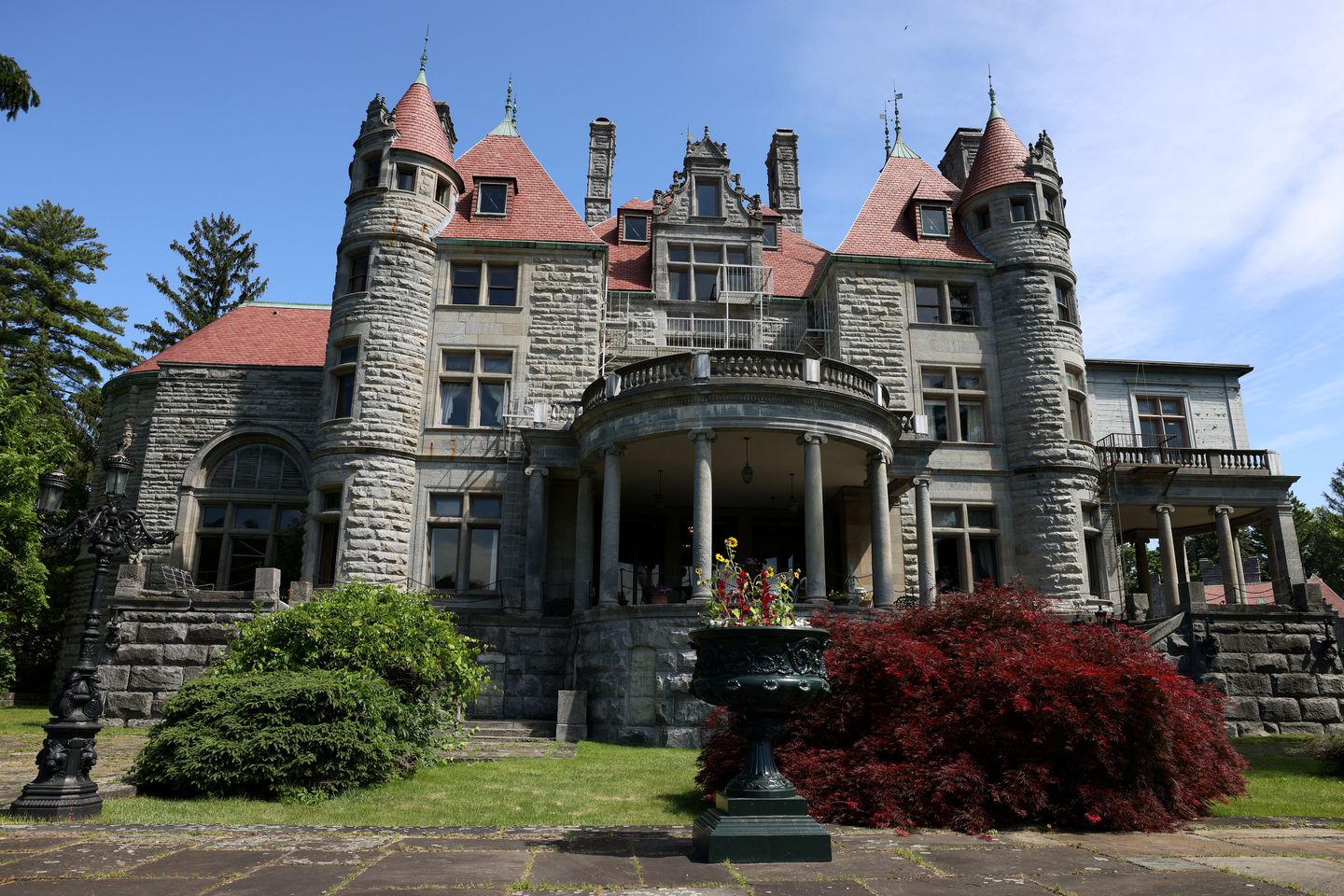 The blue dolomite structure has turrets, terraces, and towering chimneys for three dozen fireplaces. Reports vary, but according to Slonem, the estate is 68,000 square feet and has 48 rooms. Since he bought it, he has been involved in a grand renovation, repairing and restoring and bringing in his own eclectic and pop-oriented art and antiques collections. Slonem’s aesthetic is radiant, sumptuous, and playful. 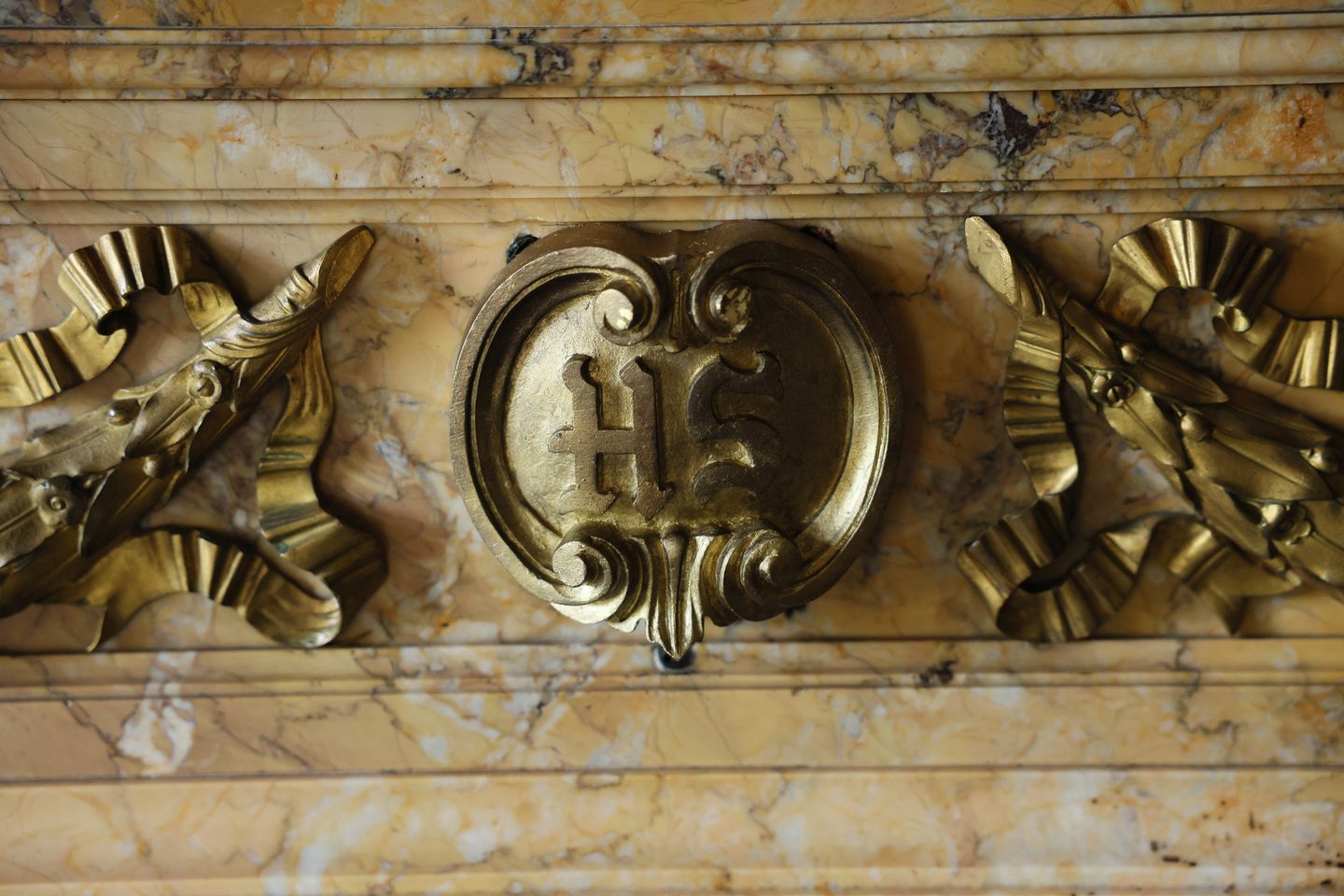 At Hunt Slonem’s Great Barrington estate, all the mantelpieces in the castle had carved initials except one, where they were missing. The artist put his own initials there. Photo by Jessica Rinaldi of the Boston Globe staff.

His friend, antiques dealer David Petrovsky, has known Slonem since he bought his first estate in Kingston, N.Y. in 2001. Petrovsky found Searles Castle for Slonem. The previous owner, the family of the late Thomas Bratter, founder of John Dewey Academy, a preparatory school housed there, was looking to sell.

Slonem has made Searles Castle feel alive and lush by mixing past and present. he honors the past, and how it lingers. He said a medium who channels the dead put him in touch with spirits. “I have a lot of contact with former builders and a relationship with the people who have lived in some of these houses,” he said.

Slonem said he and his medium have made psychic contact with the earliest owners, heiress Mary Frances Sherwood Hopkins and her second husband, interior decorator Edward Searles, who were said to hold seances themselves. Hopkins, whose first husband, Central pacific Railroad magnate Mark Hopkins, had died, was said to be America’s richest widow. She has the castle built on family land where her aunts, the Kelloggs, had run a girls school. Hopkins hires Serles to decorate, and married him in 1887, after the castle was complete. He was more than 20 years her junior. When she died at 73 in 1891, she left her considerable wealth to Searles — much to the dismay of her adopted son, who challenged the will. A detail of the hand printed ceiling inside the French room at artist Hunt Slonem’s Great Barrington estate. Photo by Jessica Rinaldi from Boston Globe Staff

“I felt the presence of a grand woman when I first went in there,” Slonem said, but “the spirits aren’t breathing down my neck.” At the same time, it seems Slonem is reconnecting the houses with the people who made them. “In one of the readings, the message came across that the spirits of the house are enjoying what I’m doing even more than I do,” he said.

Petrovsky sees what he calls “a spiritual aspect” to the painter’s decorating. “The things he buys, and the houses he buys, are sort of orphaned in his mind, and he saves them,” he said. 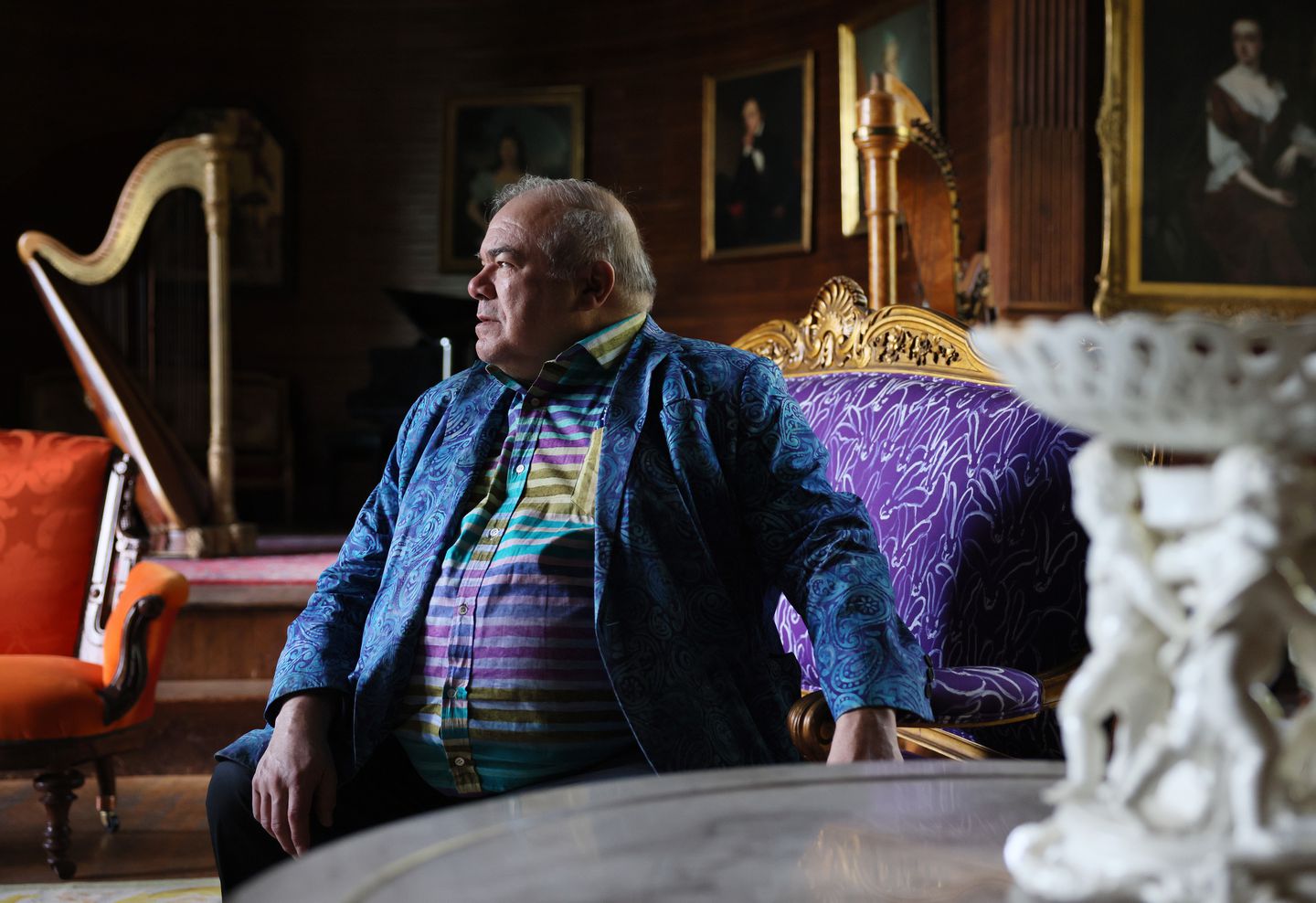 Artist Hunt Slonem poses for a portrait inside the music room of his Great Barrington Estate. The upholstery on the sofa features his own rabbit print. Photo by Jessica Rinaldi of the Boston Globe Staff

There is no end to the details to take care of. The crumbling floor of the second-floor porch is a big project, and there are small ones. Putting his collections in order in the castle may take years, and that’s fine, Slonem said. “I’m a sucker for renovating large spaces. Nothing satisfies me more, other than painting, and it’s more relaxing than making my work.”