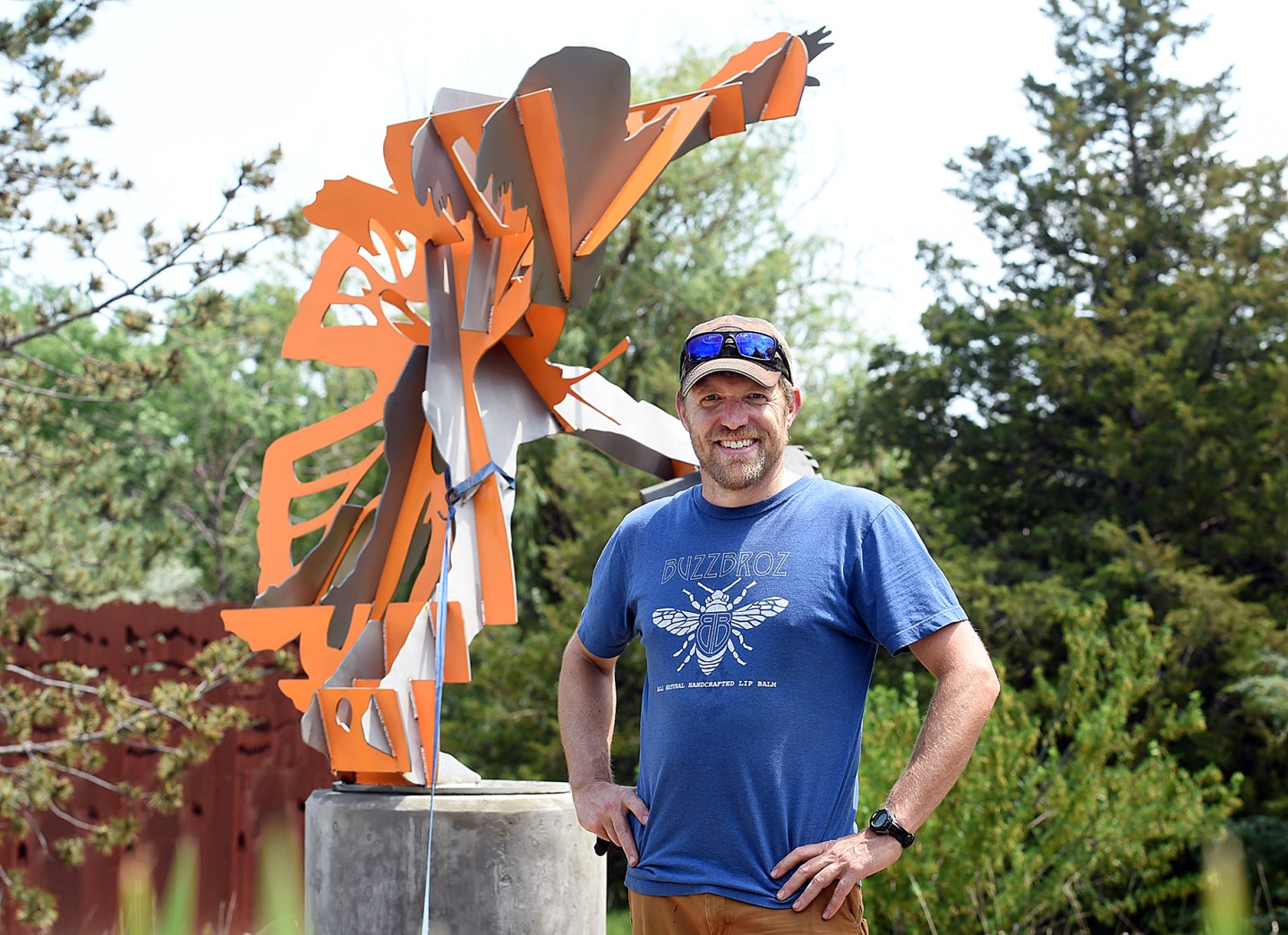 Loveland sculptor Joe Norman poses for a photo near his sculpture, Monarch Girl Friday, June 17, 2022, after it was placed at Benson Sculpture Park in Loveland. (Jenny Sparks/Loveland Reporter-Herald)

Thank you to Joe Norman for allowing us to share this recent interview he did with the Loveland Reporter Herald, written by WILL COSTELLO.

Loveland sculptor Joe Norman’s Monarch Girl, the 6-foot sculpture built in Norman’s signature style, and works by three other sculptors were installed at the Benson Sculpture Garden on Friday.

Many of Norman’s pieces appear one way when viewed from one direction and a completely different way when looked at from a different angle.

He uses this technique to contrast different ideas that might seem opposite but are in fact two sides of the same coin, or two seemingly distinct living things that he sees a connection between, like a girl and a hawk or a coyote and a jazz musician.

This can be seen in many of Norman’s public art installations across the country, from Arvada to Arizona to San Francisco. We chatted with Norman about public art, Loveland and whether his own perspectives on art or the world have changed as he has seen them from different points of view.

1.  What’s the inspiration and the background behind the piece that was just installed at the Benson Sculpture Garden?

Monarch Girl is a 6-foot stainless steel sculpture that shows a monarch butterfly from one direction and a girl jumping from the other.  It’s part of a theme I’ve been working on over the past several years involving migratory species and human movement.  I’ve learned the importance of migration patterns for all kinds of critters, including us. 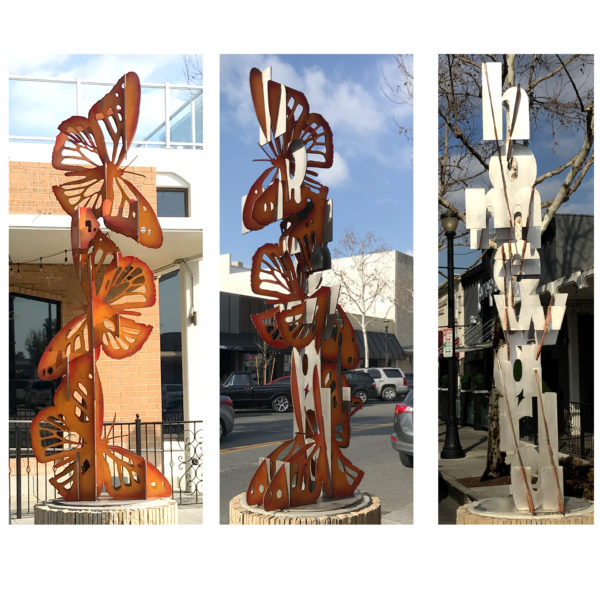 Joe Norman, “Homeward Monarch,” 2020
Commissioned through the City of Downey, CA, and the National Sculptor’s Guild
This one is placed along the butterfly migration corridor in California, and reflects the incredible journey these delicate, drunken creatures take as they fly from Canada to Mexico and back. From one direction the sculpture is a flock of butterflies, and from the other it is the word ‘homeward’. I also see it as a recognition of the migration of people, both on their daily routines and throughout their lives constantly heading ‘home’.

2. Why public art? What does it bring to the community and what elements need to be there for it to be successful?

When I was a kid our public library loaned out paintings like they did books.  I remember riding home sharing the backseat of our Oldsmobile with these gigantic paintings of rivers and mountains and thinking how cool it was that we could live with art even though there was no way we could afford to buy those paintings.  That’s the same reason I value public art; if you can’t afford it you still own it as part of the public and can benefit from it.

To be successful I believe public art needs to meet three criteria.  It’s got to be intellectually engaging. It has to speak to me emotionally.  And finally it needs to fit the place in which it lives.  My job is to make work that does those three things. 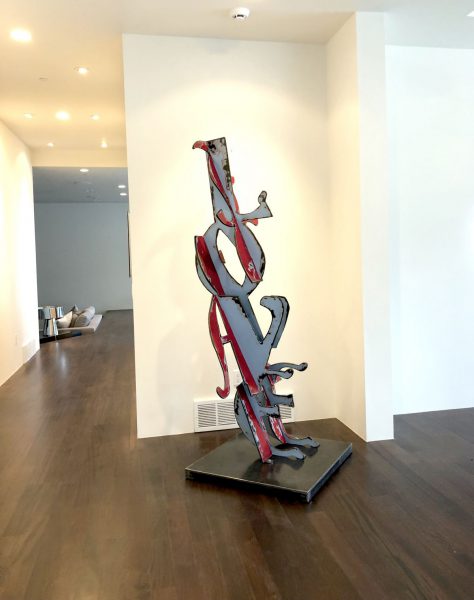 3. A lot of your work appears different when viewed from different angles. What inspires that? Have your own perspectives on art and the world changed over time?

Over the past several years, I have been interested in creating public sculptures that show different images or words depending on the direction they’re seen. I believe that having two ideas coexist in a single piece is a useful metaphor for the ecosystem of beliefs that public art empowers and protects.  I particularly like taking two ideas that I previously thought were mutually exclusive, yet in fact may not be.  I had a piece outside Aleworks for a while that said “FEAR” from one direction and “LOVE” from the other, for example.

Over time I think my standards for what I believe public money should be spent on have risen dramatically; it is not hard to page through this very newspaper and find examples of public servants acting like children and thugs on our dime.

I certainly extend those standards to the public art we all pay for.  If it’s not emotionally and intellectually engaging, or doesn’t fit the context it’s placed in then I question why that money wasn’t spent on installing air conditioning for our elementary schools instead. 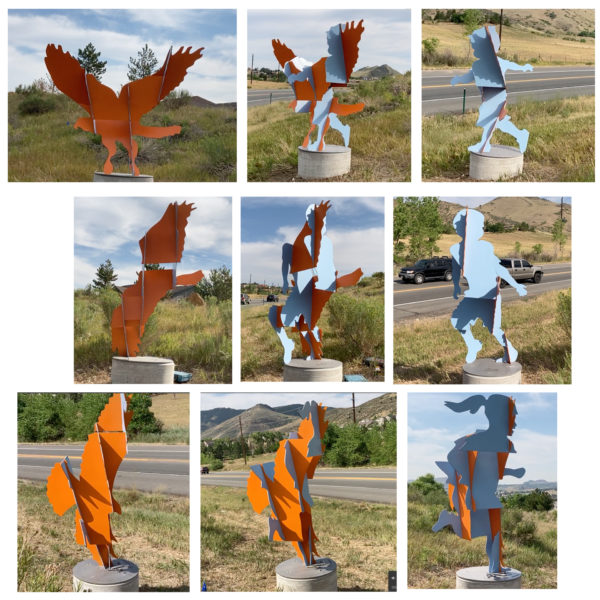 Joe Norman, “Run & Fly,” 2019
Commissioned through the City of Golden, CO
This is a set of three sculptures placed on a hillside along a major commuting corridor in Golden, CO. From one direction three kids appear running together, and from another direction it shows three Red-tailed Hawks. My intent here was to build upon the relationship Golden has with its immediate natural environment. It is home to the Colorado School of Mines, Coors Brewery, and the USGS Geologic Hazards Science Center, all of which are intimately tied to the understanding of the natural world. In addition, much of Golden’s population live there specifically because of the access to nature; in fact, the idea for the sculpture arose out of seeing several kids running around like idiots in a field while hawks circled above them.

4. You’ve got work installed all over the country. How important is having pieces on display in your hometown?

It’s rewarding to place art here that is meaningful to the local folks, many of whom I’ve known or worked with for years.  I’ve only been here since the last big flood, but I feel like I’m beginning to understand a little bit of what Loveland is about.  I can make work that adds something above and beyond pure decoration.

And, a lot of the money that’s spent making these sculptures stays right here. I use fabricators, paint suppliers, crane operators and welding equipment that’s all sourced within a 15-mile radius of my shop.  When I do bronze pieces I can literally walk to the foundry.

The community in Loveland, art and otherwise, has been incredibly generous with their time, knowledge and resources.

I’ve found most of the folks I hang with here care less about who you voted for than if you show up to help move their couch. It’s such a welcome counterpoint to the division fabricated and monetized by politics in other places.  I think we are genuinely trying to be good humans here; it helps that the town is small enough that you can’t cut off a random car in traffic since it might be your dentist.

And, the artistic infrastructure in Loveland is incredible.  I’ve been a working artist in San Francisco and Salt Lake City, both of which have priced working artists out of the neighborhoods that the creative industry made desirable in the first place.  But so far, Loveland has resisted that trend — we have affordable housing at places like Artspace specifically for artists, studios at Artworks, and energetic volunteers working on public art boards and community shows.

There are many world-renowned artists here that have let me bend their ears about everything from where to find stainless steel plates to how to rig a crane for sculpture installations.  In fact, it’s hard to get work done downtown without getting into conversations about the best place to find argon for welding or what show to apply for next season. 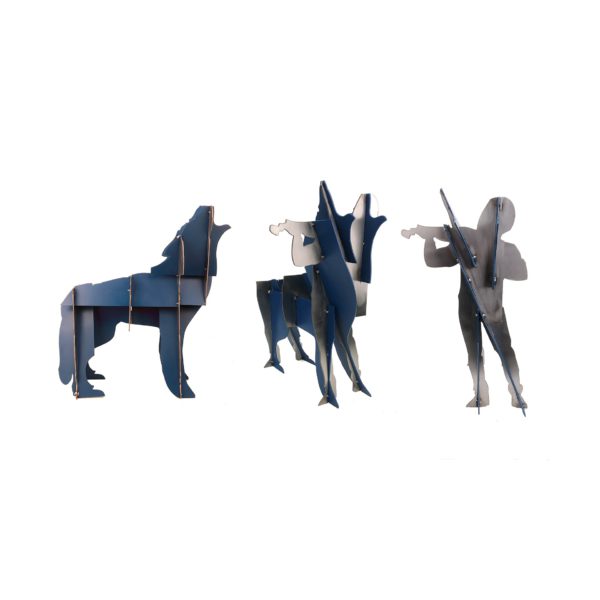