Italy: Then and Now

I recently returned from a trip to Italy. Besides the thrill of seeing work from some of my favorite artists and architects, I took some time to recreate photographs my father took while stationed in Italy in 1946. 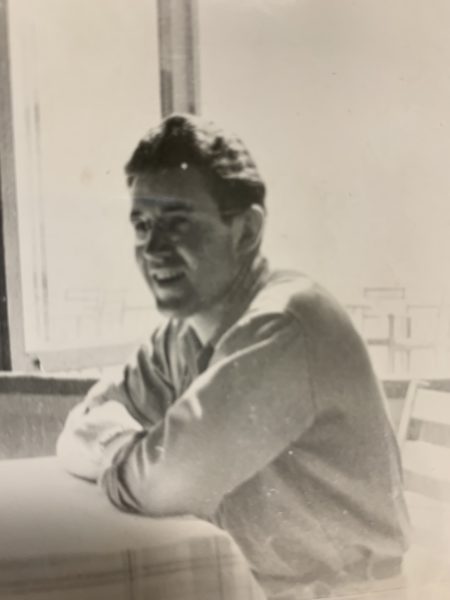 Stationed in Pisa, Italy in 1946, my father, Mark Bauer, was able to visit many great sights in northern Italy and snap some iconic photos that I have recreated. His images capture some historical moments like the bombed bridges of Florence and the unwrapping of outdoor sculpture. 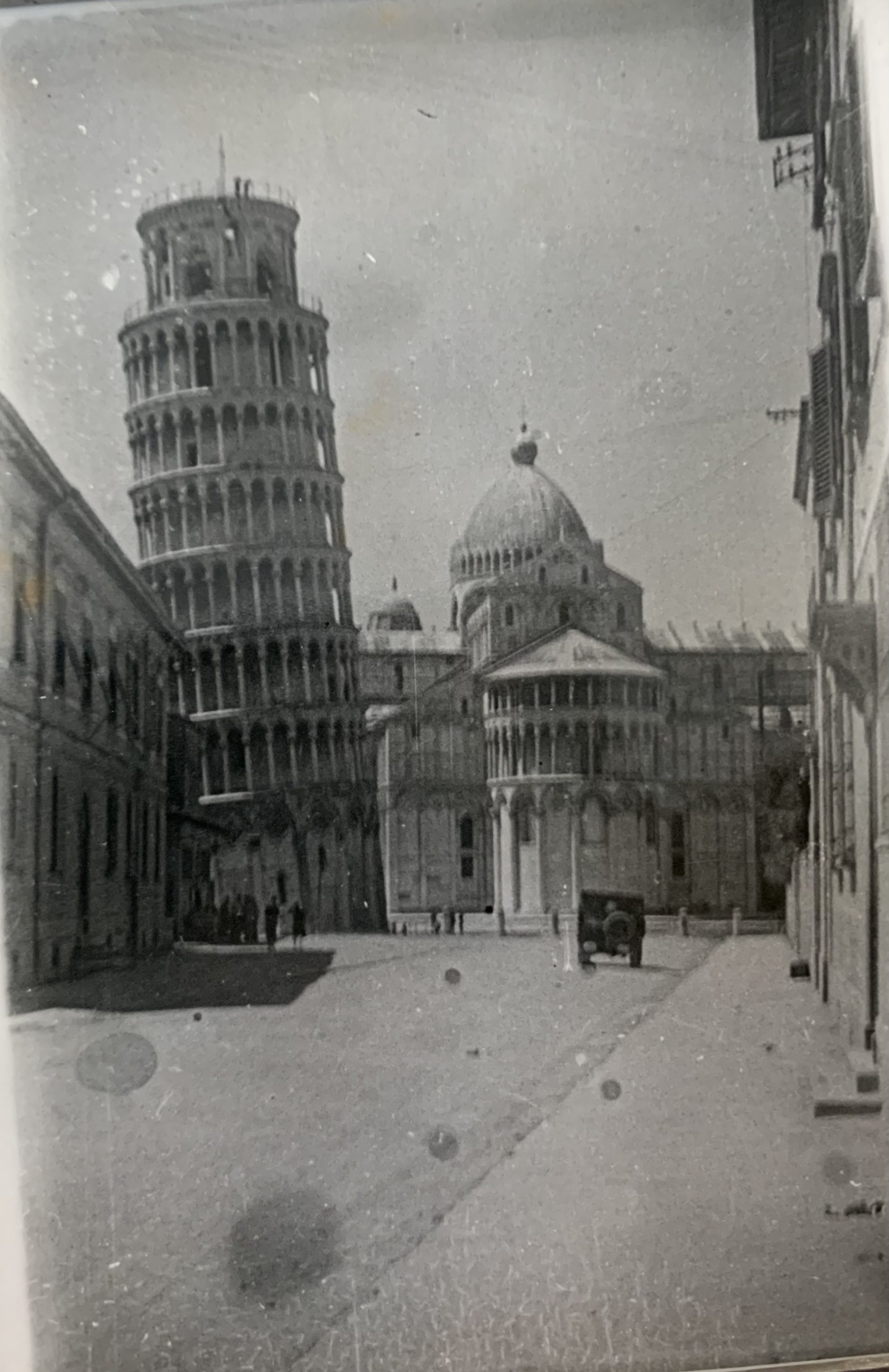 View of the Leaning Bell Tower and Cathedral in Pisa in 1946. 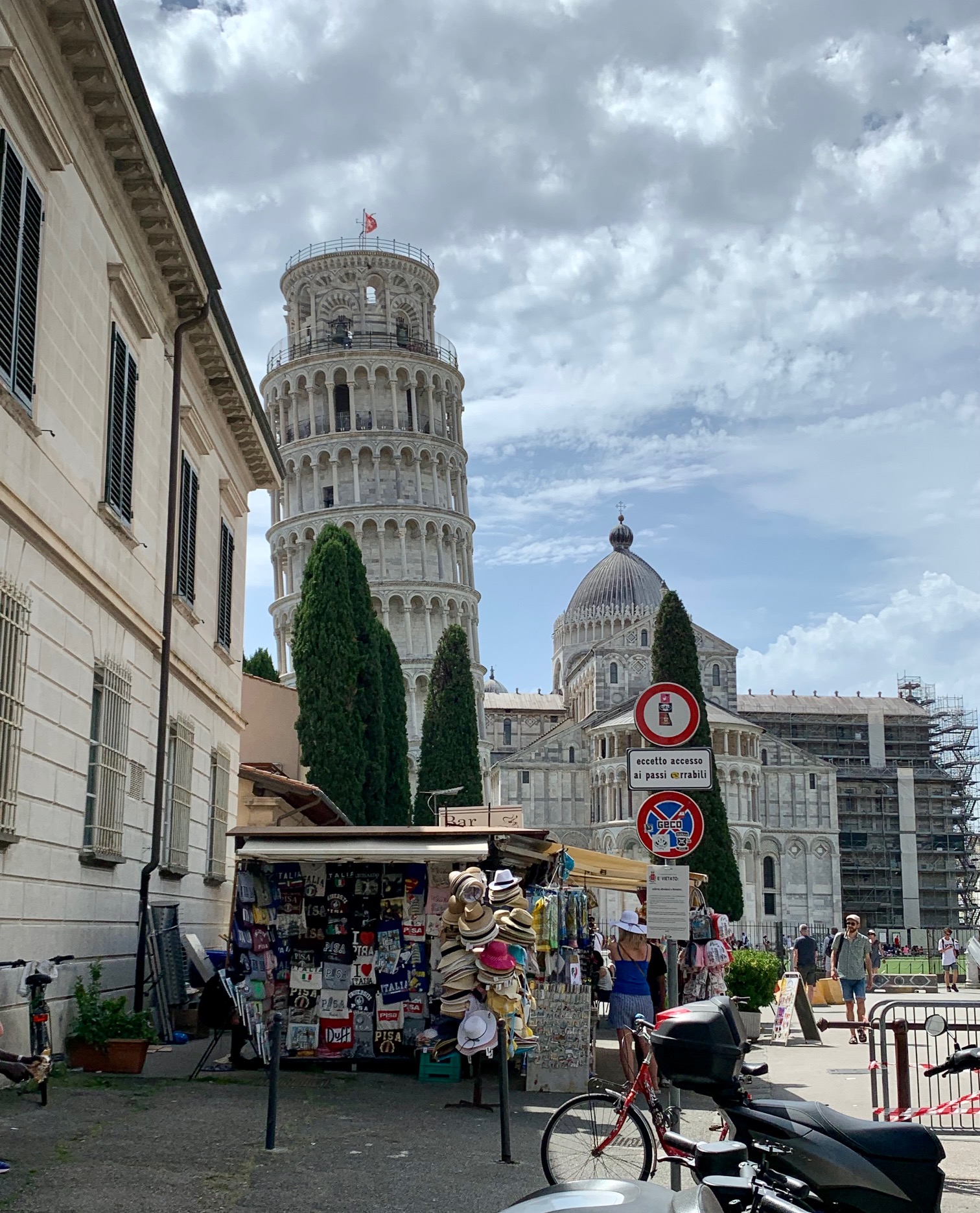 What was a beautiful angle to capture the two monuments in 1946 has become the back alley for street vendors and parking motorbikes. The Tower leans slightly less than it did decades ago. Experts monitor it every three months.

I was restricted by a 10-foot fence and gate as well, so my shot is close but not exact. I spoke to a group of local policemen standing nearby, and they were thrilled to see my old photo and hear my dad was there so long ago. While he arrived after the fighting, thankfully, he did not talk very much about the war. 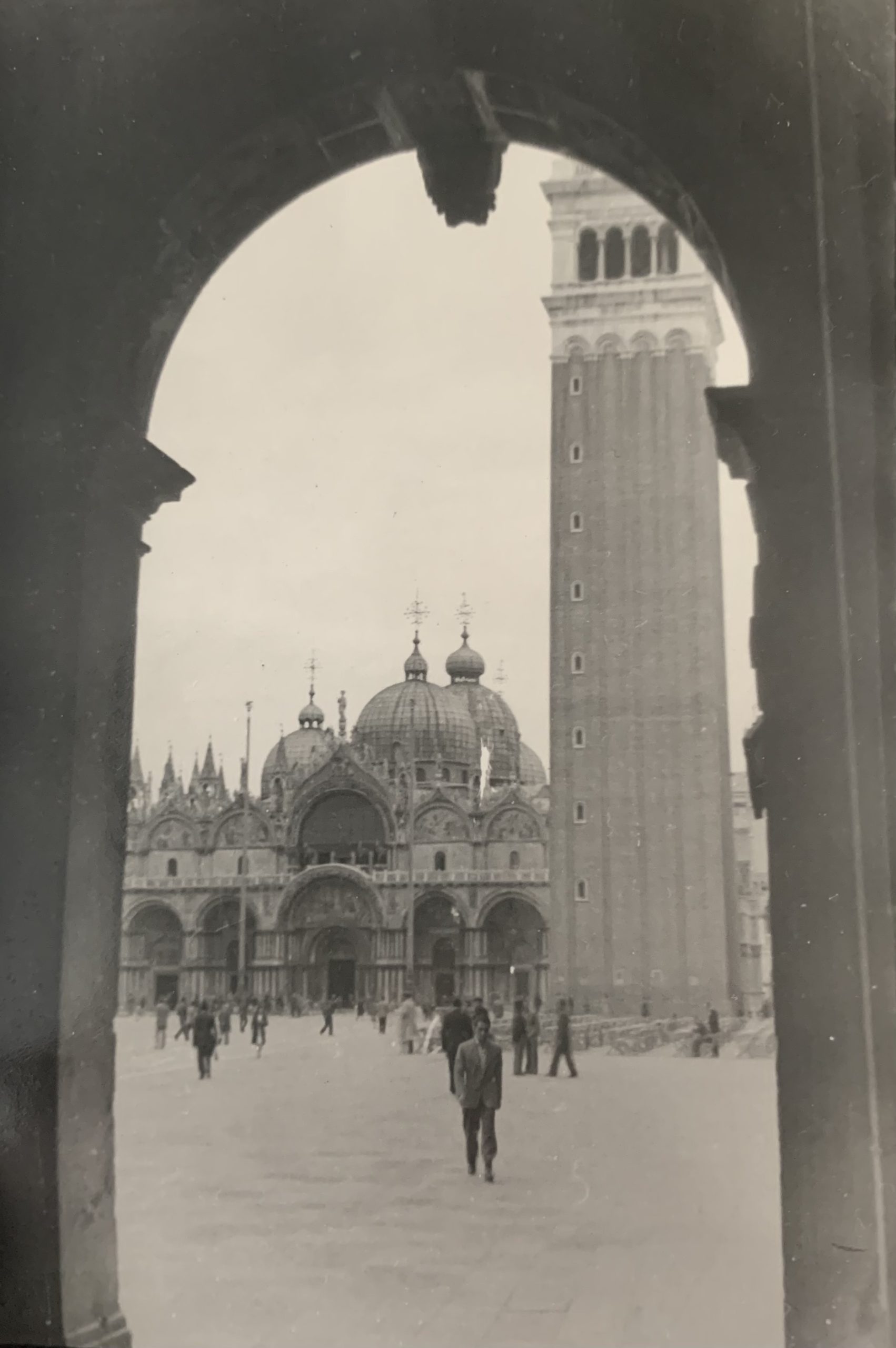 View of the Basilica of San Marcos in Venice, Italy, in 1946. 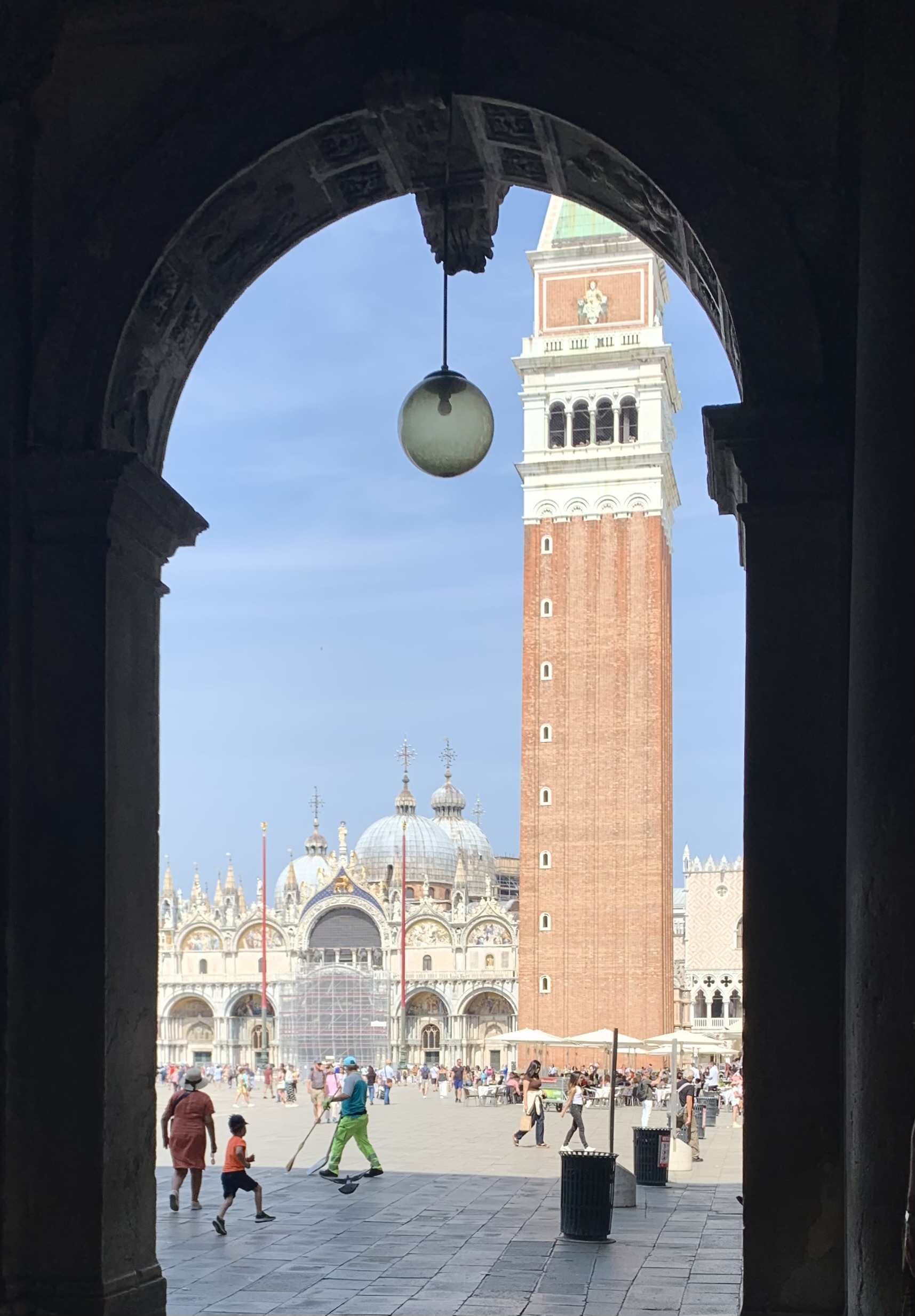 Venice today — but did we really need those light fixtures?

Venice has successfully minimized their pigeon problem by strictly enforcing ‘no picnicking’ and no sitting on the steps that border two sides (the shady sides) of the Piazza of San Marcos. The police regularly order exhausted tourists to get up. The man in bright green pants is sweeping up crumbs.

When the tides rise too high, water comes up through holes in the stone in the Piazza. 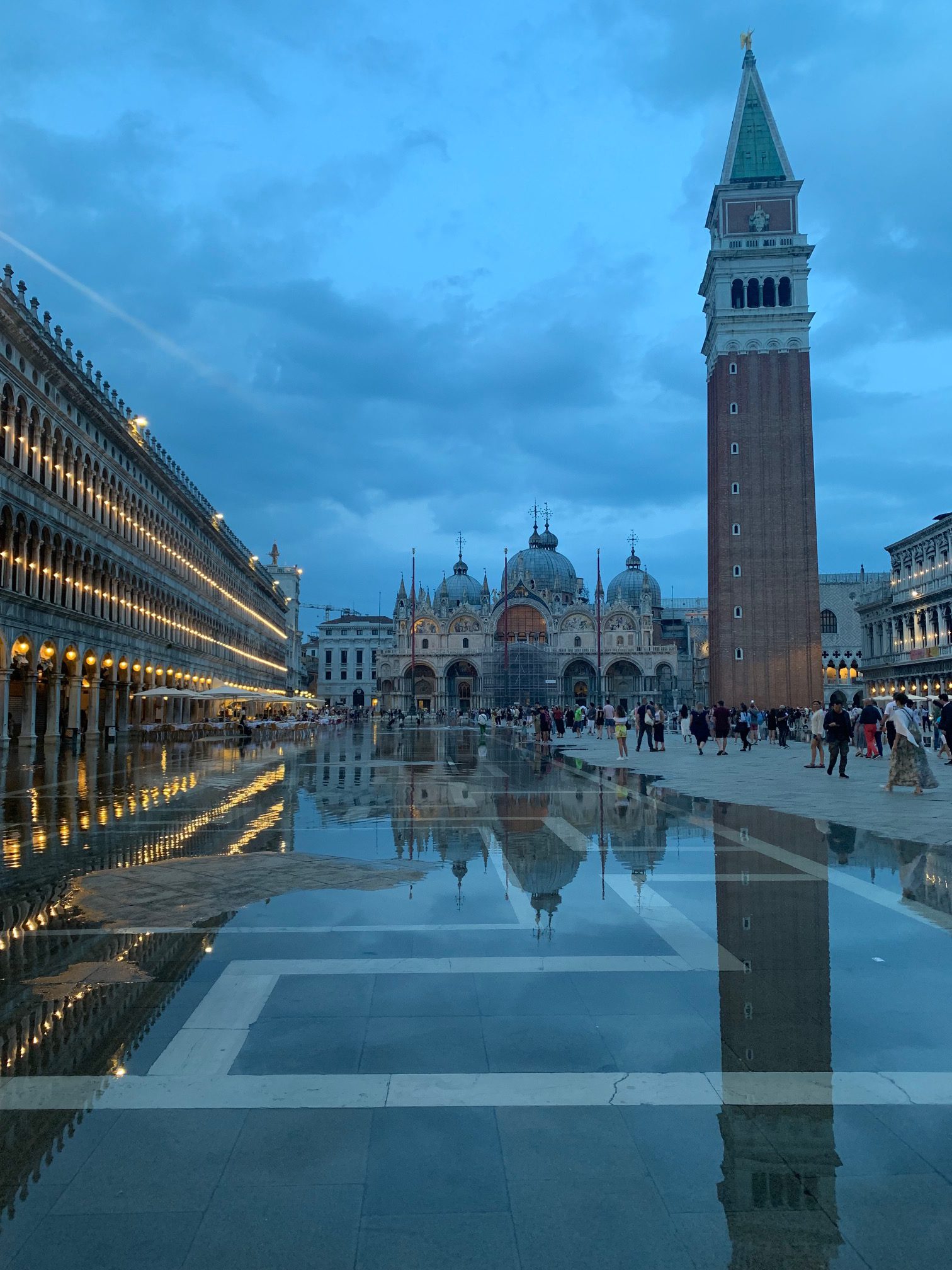 When tides rise too high in the Piazza San Marco, Venice, water comes out of holes in the stone. It clears the crowds and affords beautiful pictures reflecting the architecture. 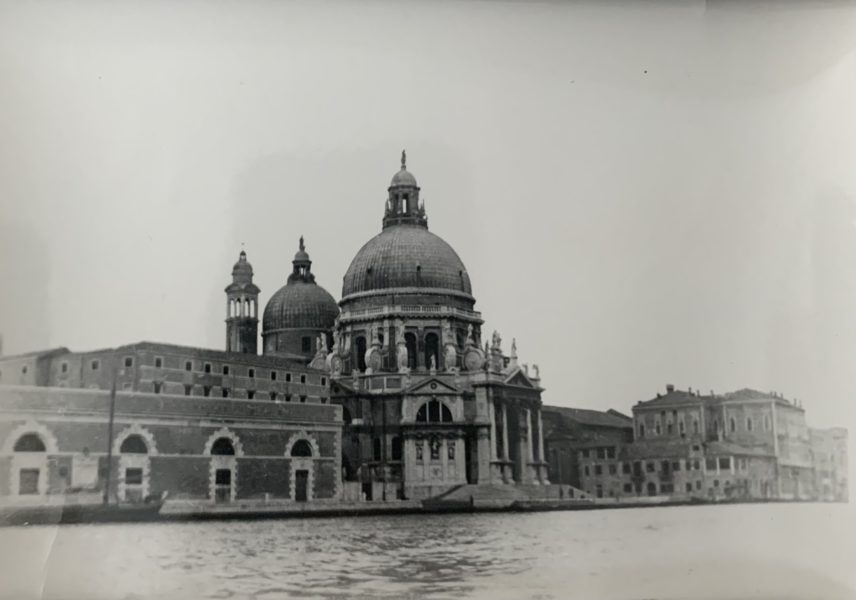 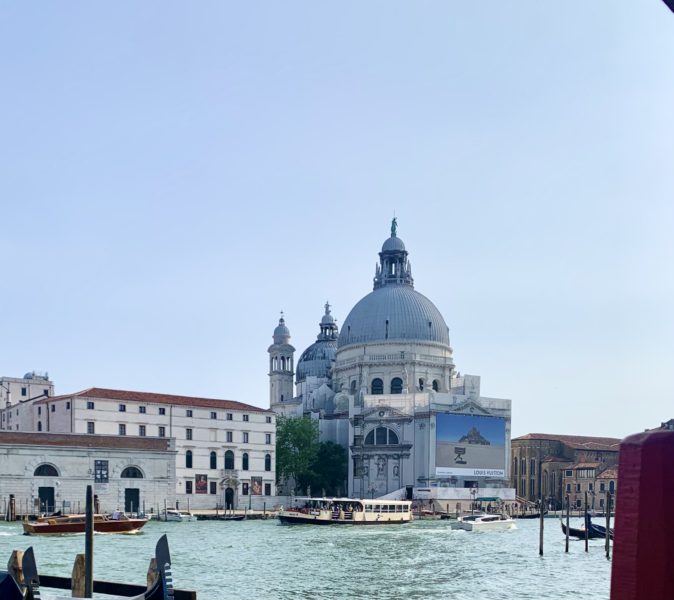 Today, the Basilica di Santa Maria Salute is undergoing restoration on the riverfront, but we were able to walk into this quiet, beautiful place and imagine the centuries of history that passed through its doors. It was built in the early 17th century and dedicated to Our Lady of Health for surviving the devastating plague of 1630. 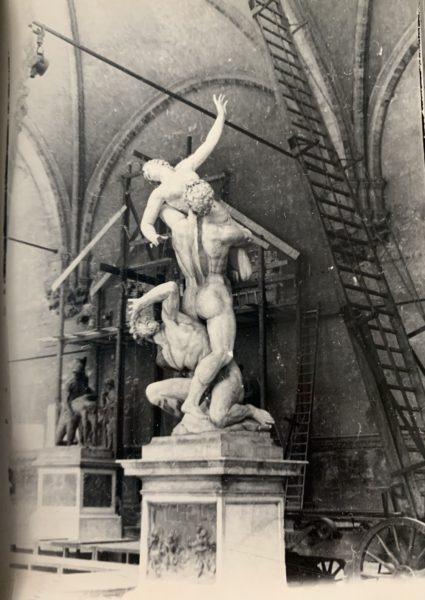 “The Rape of the Sabine Women,” by Giambologna, 1581-83, in marble, located in the Loggia dei Lanzi in Piazza della Signoria, Florence, Italy, as it looked in 1946. Many outdoor sculptures were crated in place to protect them from WW2 bombing. 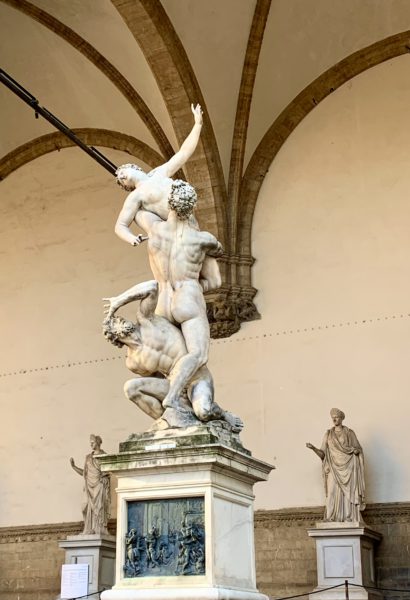 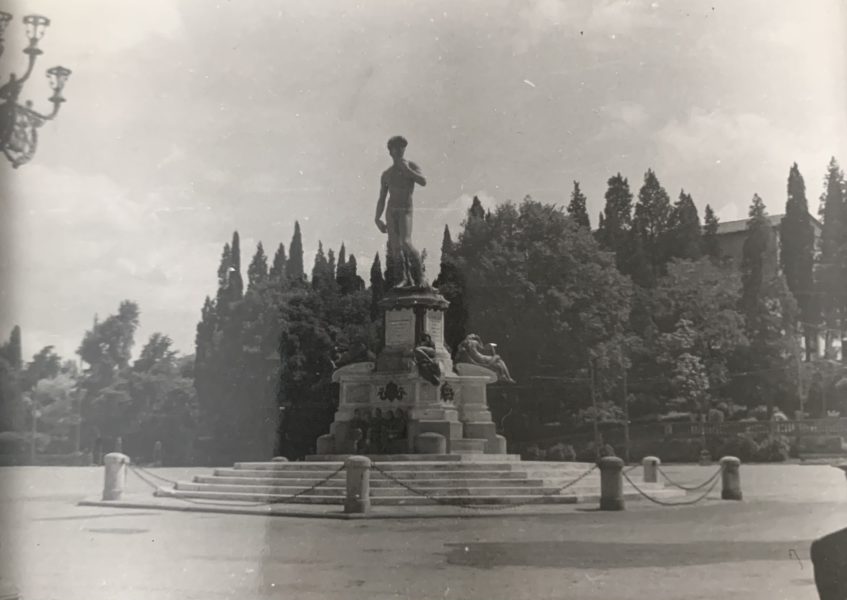 A cast bronze copy of Michelangelo’s David, in the Piazzale Michelangelo, Florence, Italy, as it looked in 1946. This urban square dedicated to Michelangelo was created in 1869 when Florence was the capital of Italy. David was commissioned to face the city from this hilltop and was delivered there by 18 oxen in 1873. 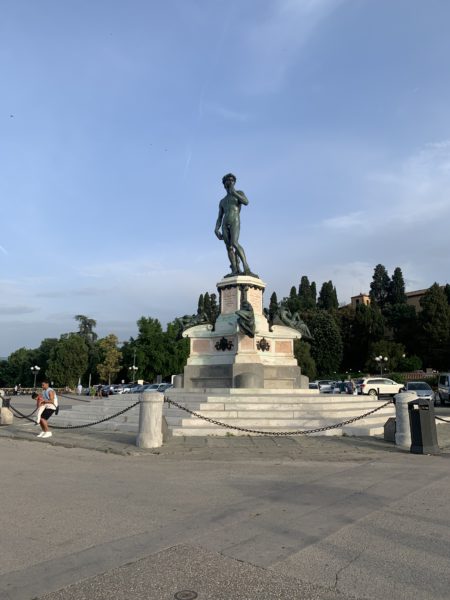 The bronze David continues to reign over the Piazzale Michelangelo where massive crowds gather every night to watch the sunset over Florence. 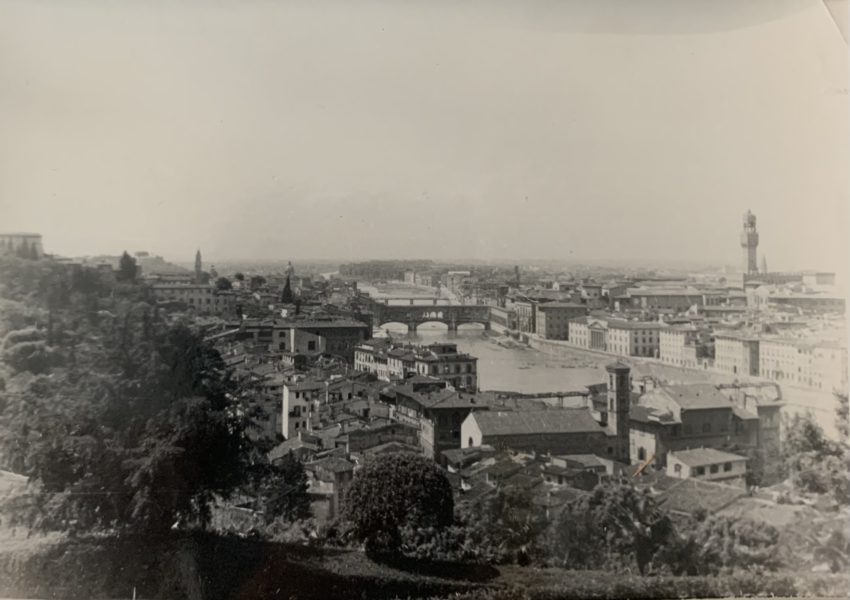 View of Florence, Italy, from the Piazzale Michelangelo, in 1946. The Nazis destroyed all the bridges over the Arno except for the Ponte Vecchio. The temporary replacement of the Ponte Santa Trinita can be seen in this photo just beyond the Ponte Vecchio. It was later restored with the original stones recovered from the Arno in 1958. 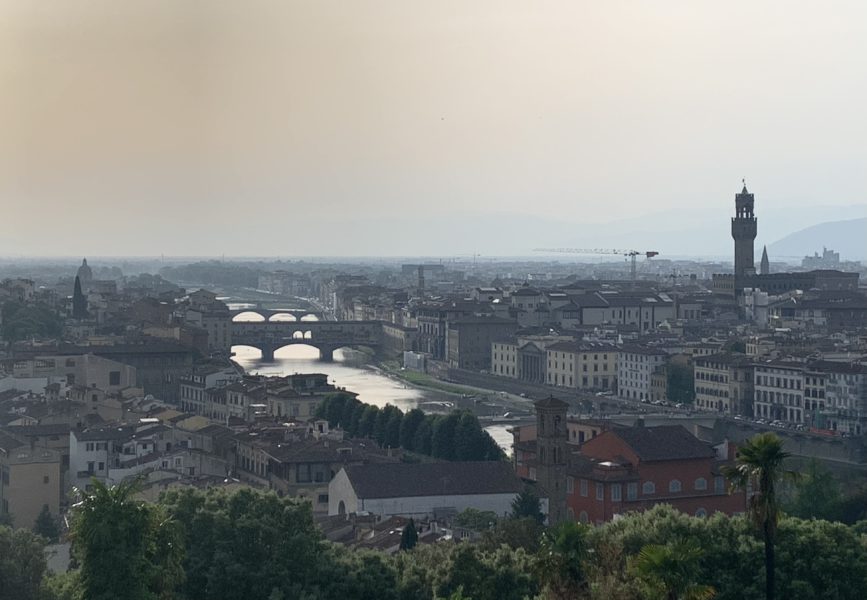 The bridges over the Arno, today, in Florence, from the Piazzale Michelangelo. Notice the reconstructed buildings on the south (left) side near the Ponte Vecchio. Nazi bombs (August, 1944) destroyed most of the south bank as well.

Today, street vendor wagons fill the piazzas and streets of Italy and obscure many of the views I was trying to recreate.  Italy survived the war and is still a great feast for the eye. It’s mostly back to normal and ready for your next visit!