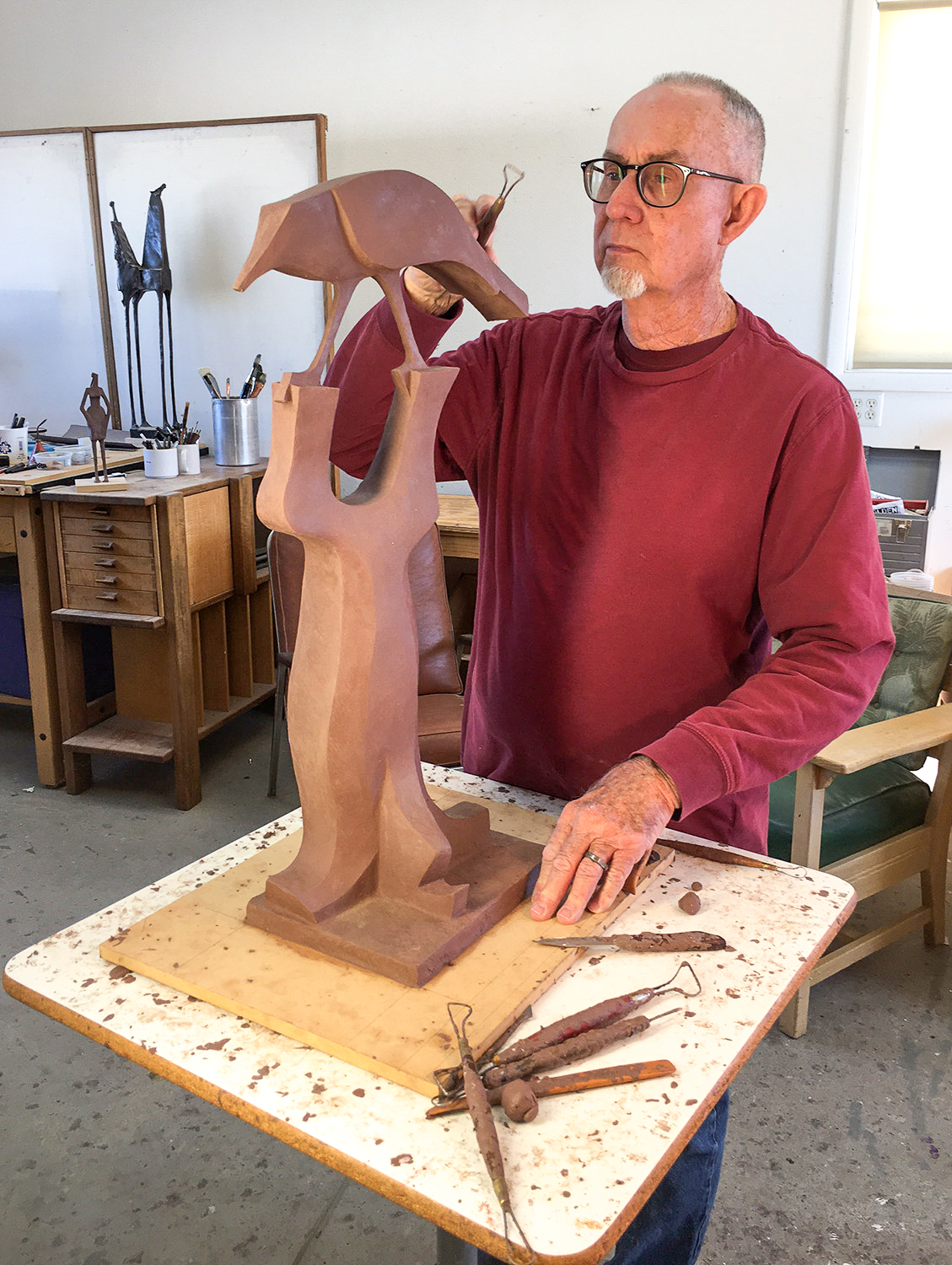 Wayne Salge sculpting with clay in his studio. Photo by Patsy Salge

The bronze sculptures of Wayne Salge call for quiet repose. Standing before these works, with all of their poise and austerity, one cannot help but find a powerful stillness. We are proud to have represented the works of Wayne Salge for many years, and now, we are proud to share a little bit more about the artist himself. In our conversation with the artist, we delve deeper into his process, his inspirations, and his motivation to continue creating new and exciting works again and again.

Wayne Salge knew he wanted to make a career of the arts for as long as he can remember. His art career first began in the world of graphic arts, where he worked as an Art Director for television and advertising. Although he was grateful to work in a creative profession, he remembers feeling frustrated that the work he created was specifically requested by clients rather than work that he felt inspired to create. “In the graphic art days, I was always doing something for a client, so I was doing what they wanted more than what I wanted,” Salge says. 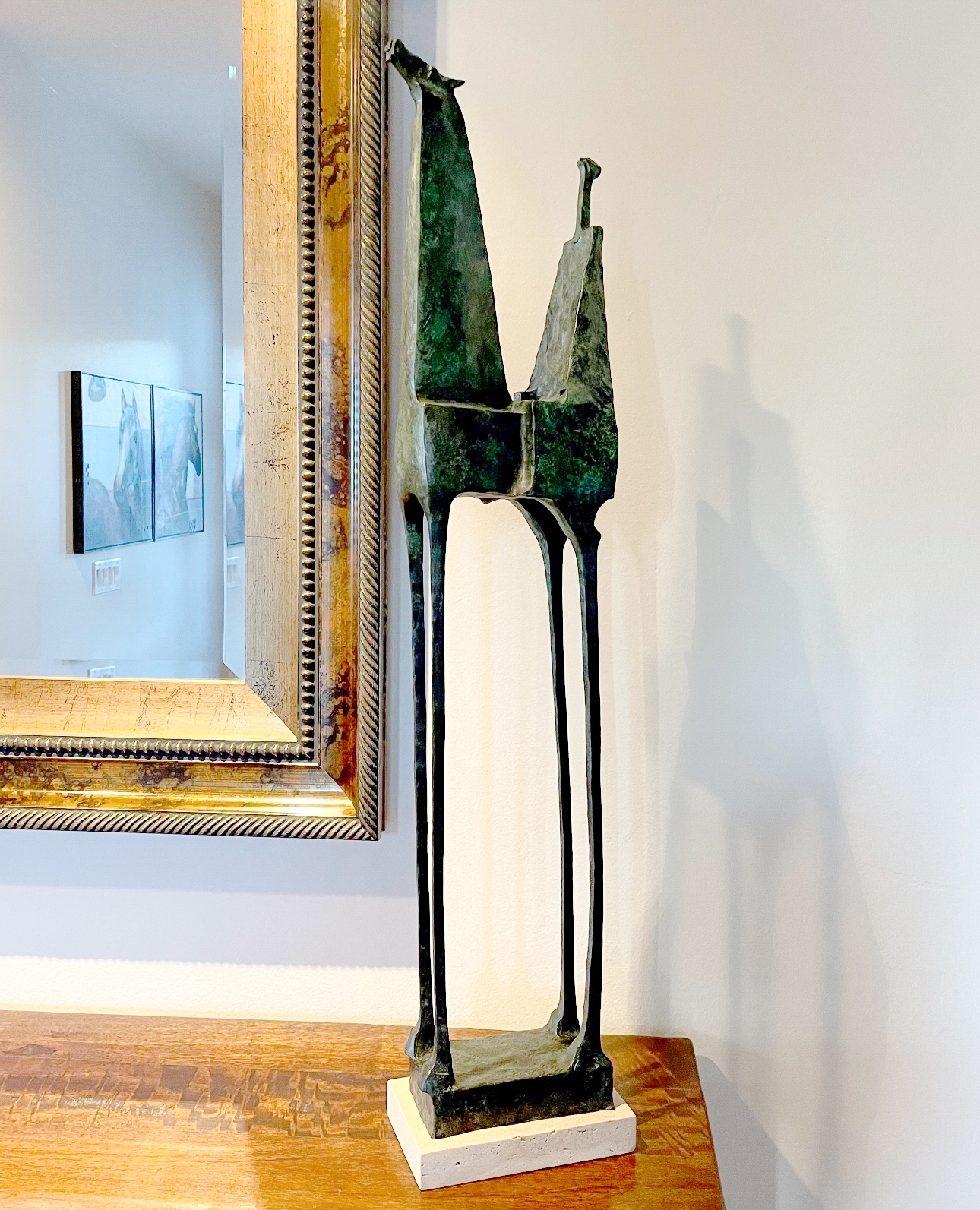 While working in the graphic arts field, Salge was able to practice and hone a unique style of graphic arts, within the exaggerated character of cartoons. Nowadays, subtle instances of this style have carried over into his sculptural work. The exaggerated, elongated forms of his subject matter remain, but the cartoonish style of his graphic art days has been replaced by the sophisticated elegance and dynamic power of his bronze work.

When Salge’s children were in college, he and his wife Patsy decided that it was an apt time to change careers and finally realize Salge’s dream of becoming a full-time fine artist. Together as a team, with Patsy working on the business end and Salge working on the creative end, they dove into the world of sculptural art. 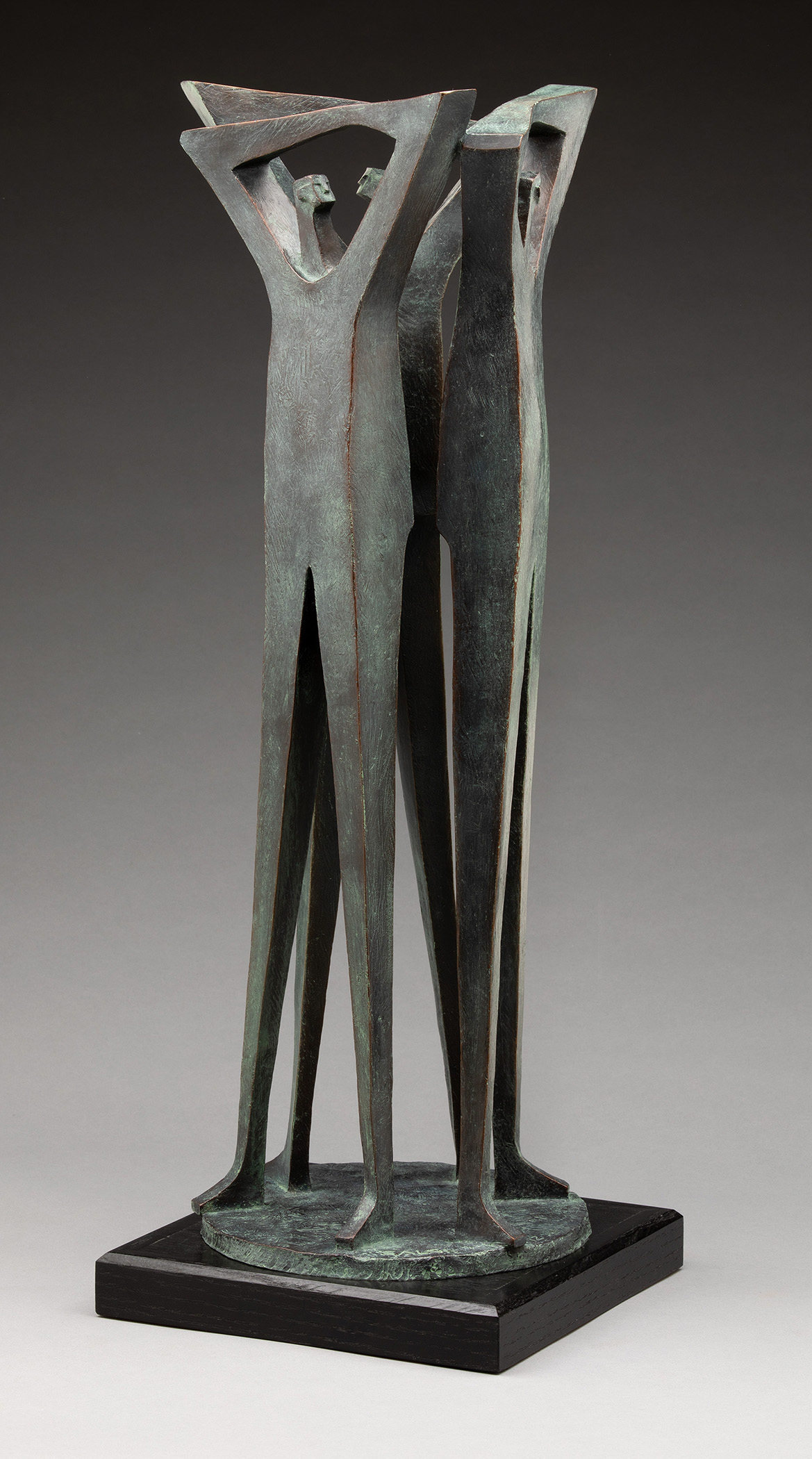 Combining his experience from his time as a contemporary graphic artist with his knowledge of the classical medium of bronze, Salge developed a signature sculptural style, blending classic and contemporary elements to “cut to the bare essence of his subjects.” “I am not concerned with precise anatomy or plausible function; instead I focus on the expression of attitude or emotion,” Salge explains.

Before working with bronze as his media, Salge worked with stone. He soon discovered, however, that stone was unable to keep up with his vision for his works. His elongated forms, like the long legs of his animal and figurative works were not as compatible with the more fragile nature of stone. He decided to switch his media to bronze and hasn’t looked back. “I like that bronze hasn’t changed for hundreds of years,” he says, “It’s like going back in time.” He now loves the added element of color that bronze allows, finding joy in adding the patinas at the end of the bronze process. 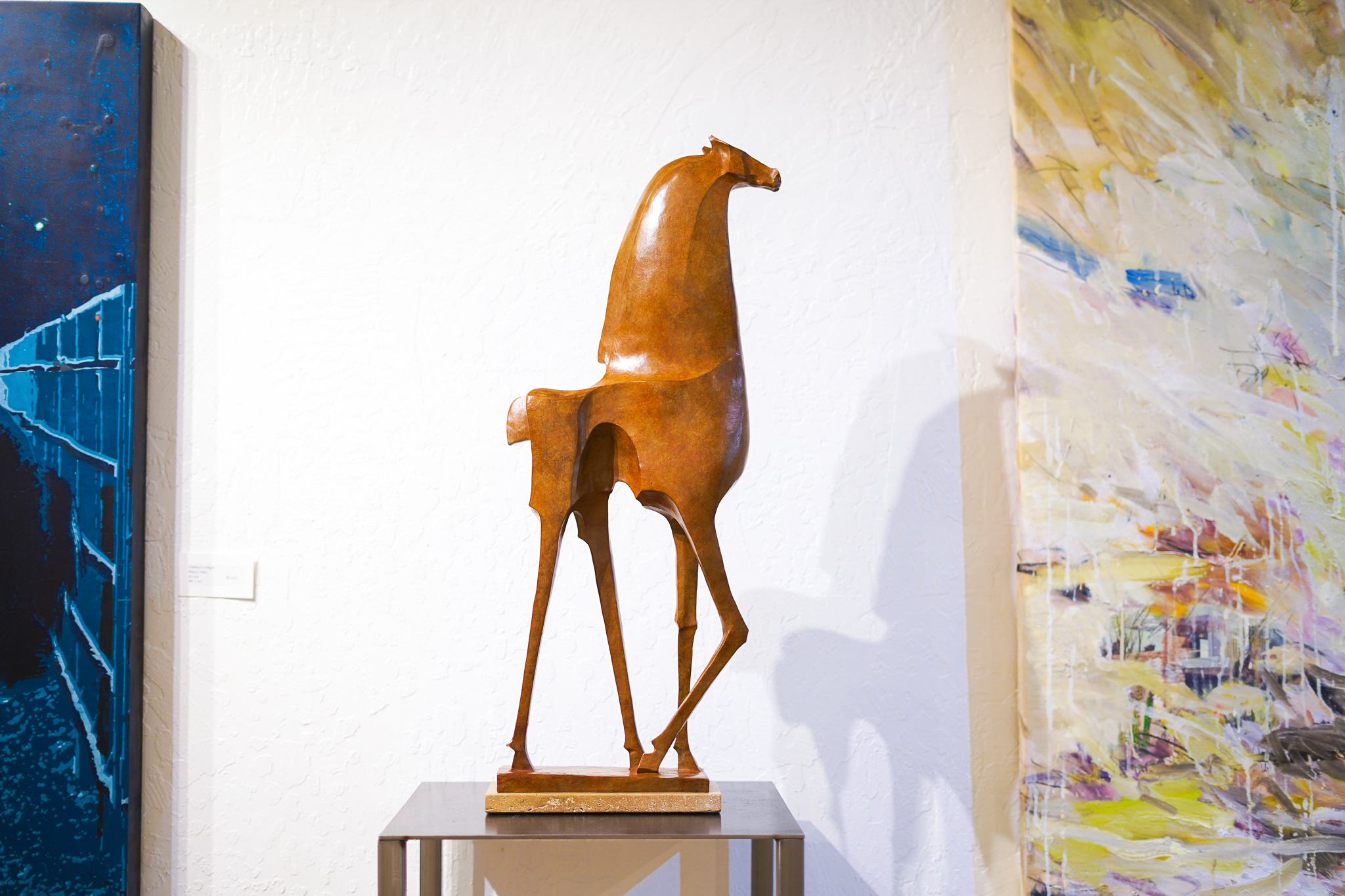 Now after nearly 24 years as a professional fine artist, Salge has created over 180 sculptural works, including 28 sold out editions. He’s become an elected member of the National Sculpture Society and a fellow in the National Sculptors Guild. He has been invited to participate in several museum exhibitions, (Art on the Llano Estacado at Texas Tech Art Museum, the Colorado Governor’s Show at the Loveland Museum, Prix de West at the National Cowboy and Western Heritage Museum, and Show of Miniatures at Albuquerque Art Museum to name a few). He has created large scale public art installations in seven different states and has received many awards, honors, and accolades for his work.

The awards he’s received pale in comparison to the sincerity of children’s awe. 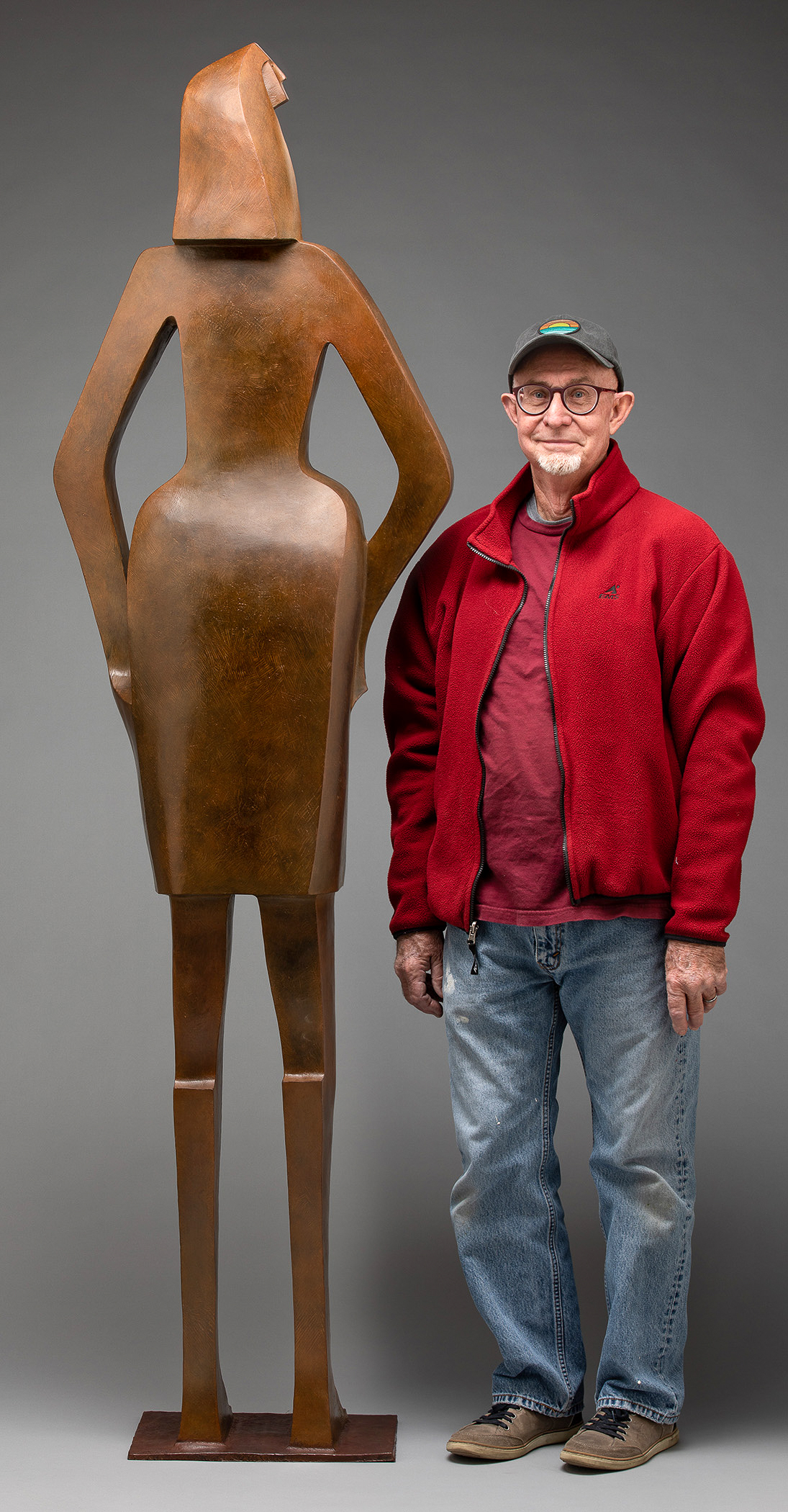 Speaking to the artist, however, you would never know it. As an incredibly humble, somewhat reserved man, Wayne Salge speaks of his accomplishments with a playfully dismissive air. “I’ve never kept a list of awards,” he explains, “they don’t mean a great deal to me.” Instead, Salge’s personal list of greatest accolades and artistic accomplishments is far more heartfelt. “It’s when other artists really like my work that I feel the best about it,” he explains. Rather than dwell on organizational awards, Salge takes greatest pride in moving others, be it a fellow artist, a foundry worker, a collector, or even a child. “My favorite accolade was received from the elementary school students at my grandson’s school where I presented samples of my work, explained the bronze process, and answered their questions,” he says. The awards he’s received pale in comparison to the sincerity of children’s awe.

Understanding the priorities of the artist, it only makes sense that his favorite aspect of having his work invited to art museum shows is the relationships that he’s been able to form with other people through these opportunities. “It’s interesting to go to museum shows and see what other artists are doing,” he says, “I’ve gotten to know a lot of them through the years, so it’s good to meet up with them and talk to them.” 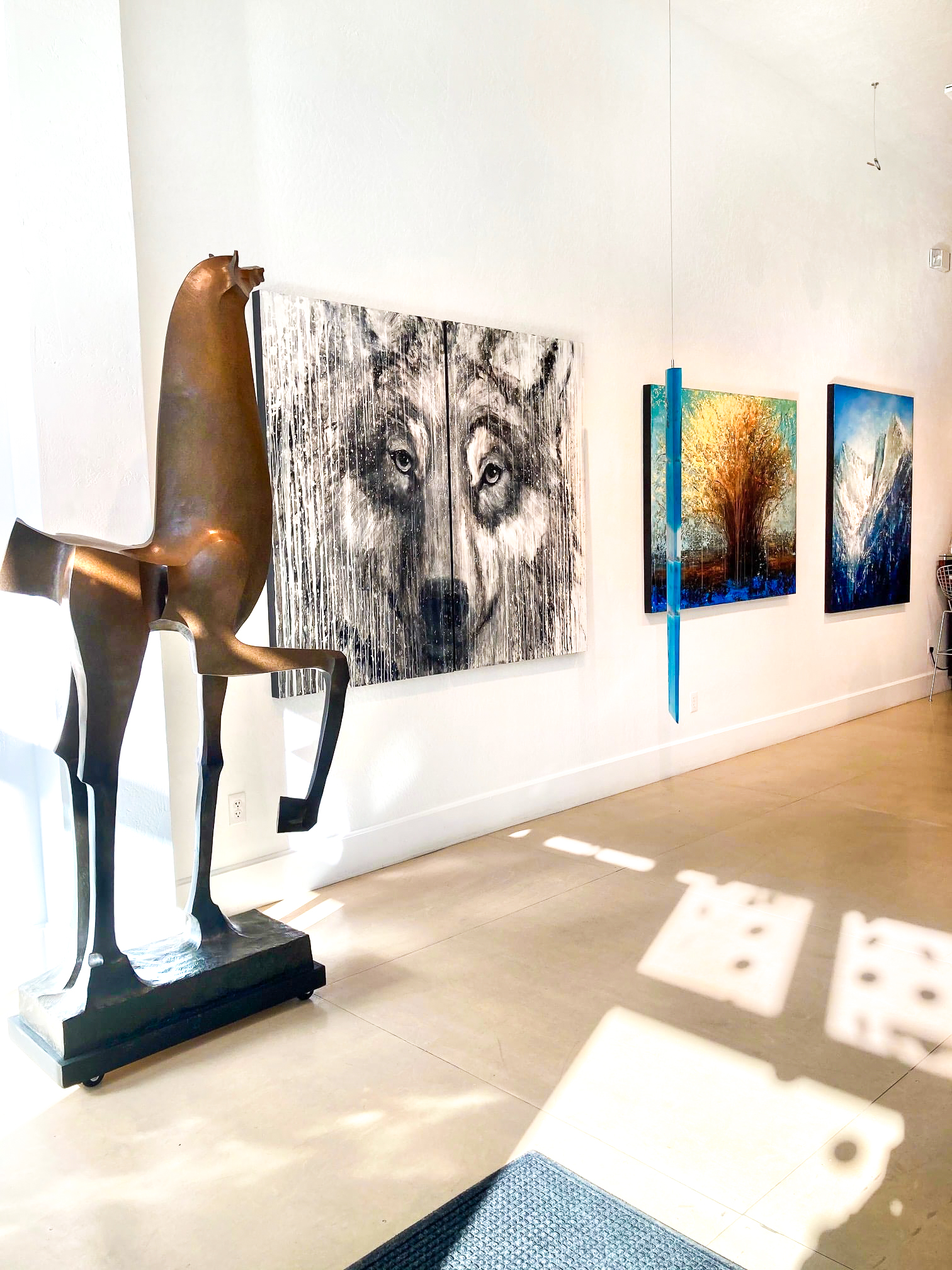 Similarly, he loves to see his work alongside other artists at Gallery MAR. Salge elaborates: “It’s always interesting to see what’s around in the gallery. Gallery MAR is a very attractive gallery and they always do such a good job of showing work. It makes it really easy to take my work to them.” After years of working with Gallery MAR in Park City, Salge is excited to have his work soon featured in Gallery MAR Carmel as well. Now our seaside collectors in California will be able to revel in the powerfully beautiful works of Wayne Salge.

After more than two decades of fine art, Wayne Salge continues to surprise and delight with new and exciting works year after year. “I just want to keep going,” he says, adding with a laugh “I don’t want to retire.” With such a successful career doing what he loves, who could blame him? We rejoice to know that we can look forward to new works by Wayne Salge for years to come. All Salge hopes for in return is that you, his viewers and collectors, take something away from his work. “I just hope people get a feeling for it,” he says. 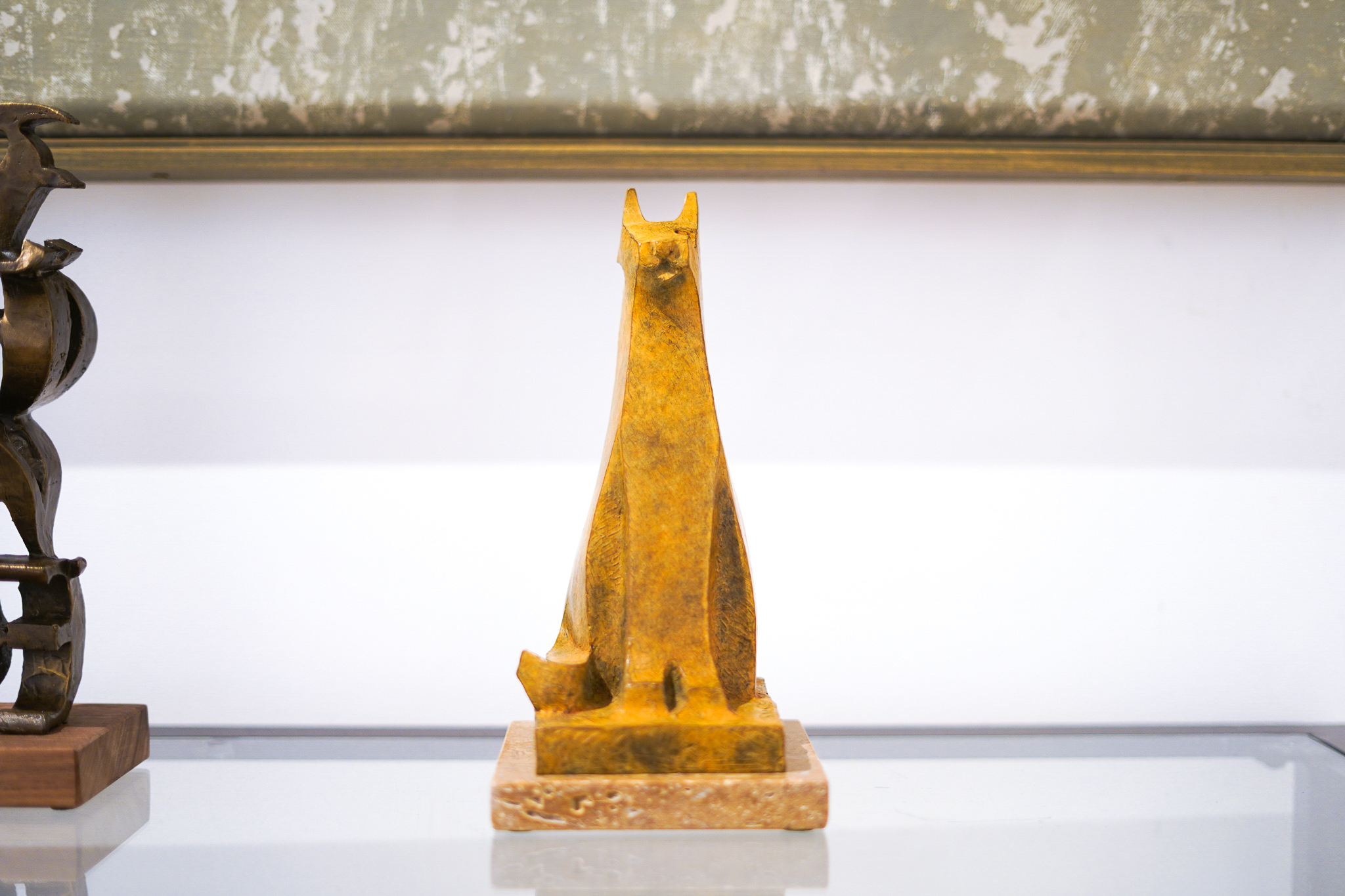 Museum invitations, public installations, awards, and accolades – all of the honors an artist can hope for in their career – are not as satisfying to Wayne Salge as the thrill of seeing people connect with work that they will cherish for generations. Send us a picture of how your Wayne Salge sculpture shines in your home or find your very own new work here at Gallery MAR, and soon at Gallery MAR Carmel.

We would like to extend a special thank you to Wayne Salge for his time and insights.