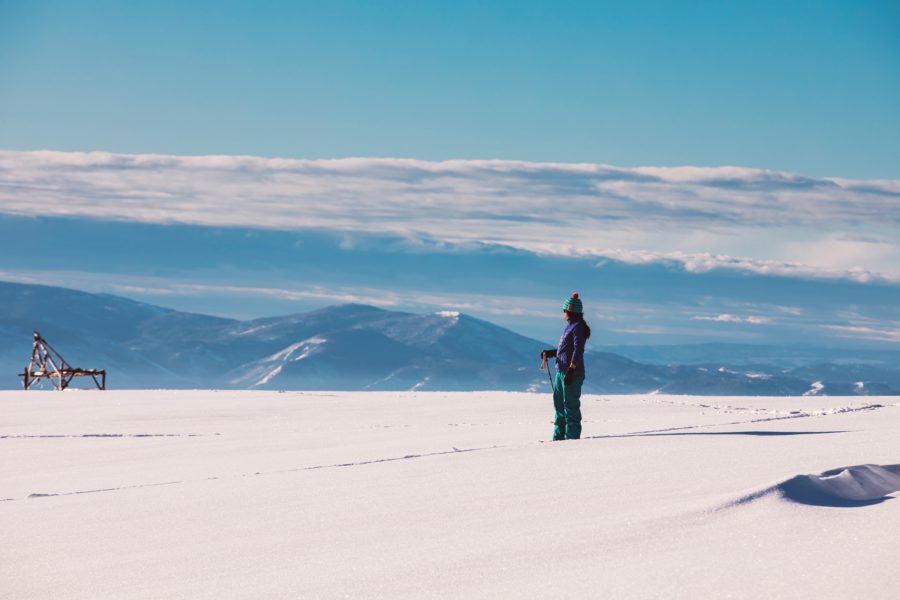 for Bridgette Meinhold’s show “The Moments in Between.”

In ski towns like Park City, locals and vacation goers alike hit the slopes for adrenaline-fueled runs down ski slopes. Mountain towns like ours are renowned for this high energy activity: fresh powder trailing behind skis, wind whipping at faces, and bodies hurling down snowy cliffs. Films about the mountains often revolve around these high octane activities, this world of motion and landscape in blur. Gallery MAR encaustic artist Bridgette Meinhold and videographer Claire Wiley of Eclectic Brews Productions present us with a different perspective of these mountain towns through their short film, “Reverie.” They show us how finding deep connection with nature can come through quiet, peaceful, meditative movement.

Their short film offers a refreshing perspective on movement through the mountains, one that has struck a chord with audiences who find solace and gentle peace in the mountains. Already making waves in the outdoor film community, “Reverie” has been accepted into 12 film festivals and is the winner of the Spirit Award at the Bozeman Film Festival. When Bridgette Meinhold and Claire Wiley began filming, however, they never imagined that their footage would amount to anything more than a fun personal project between two artist friends. 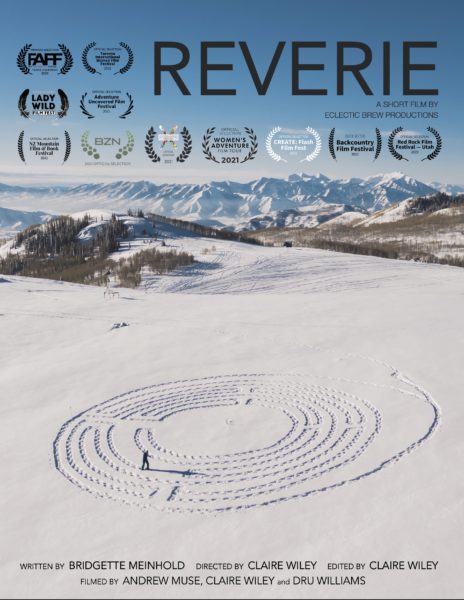 The film poster for the short film “Reverie”

Artist Bridgette Meinhold and videographer Claire Wiley have been friends for years. Claire Wiley often films Meinhold‘s encaustic process for our Gallery MAR artist videos, so they’re accustomed to working together on film projects. As two fellow artists, their conversations often trend towards artistic ideation. Of Bridgette Meinhold, Claire Wiley says, “she’s quite an artist, and I’m always enthralled by her incredible mind. I love having a friend that I can talk to about these kinds of projects.”

Claire Wiley films Bridgette Meinhold in her studio, working on an encaustic painting for Gallery MAR

In one such conversation, Meinhold nonchalantly brought up the fact that she likes to make a snow labyrinth for her birthday every year. Intrigued by this unique tradition, Claire Wiley asked if she could come along this year to film this process. “It just sounded so beautiful,” Wiley remembers.

Meinhold began this labyrinth making tradition for the first time on her birthday in 2018. She realized that she wanted to move her body in the mountains and create something at the same time. “I had free time on my birthday and I just thought, ‘I have to go do something.’ I was feeling the need to be outside and use my body but also make something. I’ve long been fascinated with the concept of ephemeral art, so that’s where it started.” Meinhold references the Chartres Labyrinth for inspiration, drawing a map of the labyrinth on her wrist to recreate with her steps. 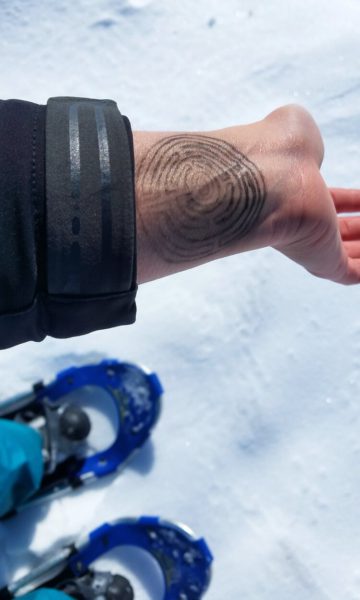 Typically, Meinhold documents her process on her own, but argues that from her ground vantage point, her documentation does not do her labyrinths justice. Fortunately, this year, Claire Wiley was there to capture the entire journey.

“Some people can get up in the morning and sit down and be quiet with themselves. Other people, quiet their mind through some sort of activity and movement and connection with nature.”

So on a cold March morning, before the sun rose over the horizon, Bridgette Meinhold and Claire Wiley began their trek up the mountain in complete darkness and waist deep snow. “It was extremely cold,” Wiley laughs, remembering, “I lost feeling in my extremities while we were filming.” Trudging through the freezing snow on a cold, dark winter morning is challenging in its own right but add heavy camera videography equipment, and it’s an entirely different story. “This is the thing I always think about in any movie I see in far flung places: the camera person,” Claire Wiley says. She observes how an invisible camera person means a hard-working camera person. “The camera person is working really hard to be that fly on the wall for you, especially in those softer moments,” Wiley says. With such a large part of the film revolving around the untouched, virgin snow around Bridgette Meinhold, filming this project took as much stealth and finesse as ever from Claire Wiley. “I had to strategically march way out of frame, so I didn’t disturb the snow for the drone shots,” Wiley remembers. 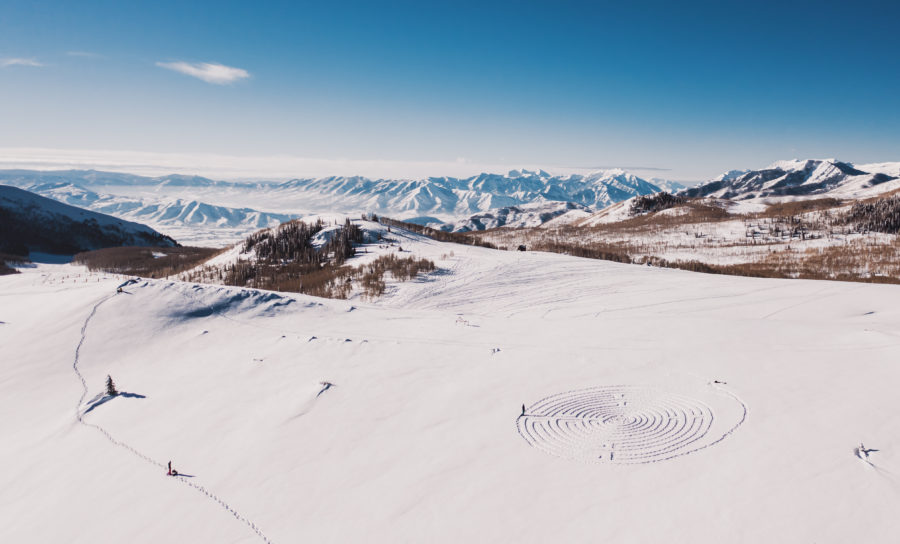 An aerial drone shot from behind the scenes of the film “Reverie.” Catch a glimpse of videographer Claire Wiley on the far left, filming Bridgette Meinhold’s labyrinth making

This subtle, documentarian approach to her filmmaking style allows Wiley to present her subjects as they are, without interference. Wiley says of her filmmaking style, “I want my films to be the unfolding of a subject for the viewer. I want to provide them with golden nuggets of something they didn’t know before, something that resonates with them, or something that they can have an emotional attachment to. I try to film from the viewer’s perspective, to see what they will gain from what we’re creating.”

“Nature’s always changing, which I think is fascinating in its own way, so ephemeral art is just another way of experiencing that, of recognizing how we can experience and appreciate it enough to allow that change to happen.”

Despite the cold, Wiley was grateful to be there, experiencing this moment. In fact, the icy cold conditions made the scene even more spectacularly beautiful, as the frigid cold crystallized the top layer of the snow. So while Claire Wiley and Bridgette Meinhold reached the summit of the mountain, the sun rose with them, revealing a pristine, glistening canvas of snow. 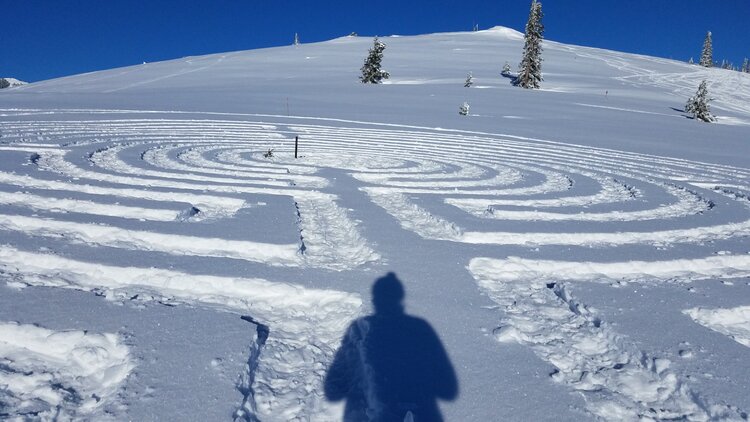 Then, lost in reverie, Meinhold snowshoes through her labyrinth in the stillness of the alpine air. “It was very quiet that day, so it was such a peaceful morning,” Wiley remembers. “And I was just watching her. She was so methodical. It was very beautiful to watch her go through this process.“

Creating these labyrinths, especially in such impeccable conditions, becomes a kind of moving meditation for the artist. Wiley recounts one of her favorite parts of the film, “Some people can get up in the morning and sit down and be quiet with themselves. Other people, quiet their mind through some sort of activity and movement and connection with nature.”

“What I hope people take away from “Reverie” is a reminder of our connection to nature and to not to get caught up in the impermanence of things.”

Meinhold’s work has always been about connecting with nature. From her natural beeswax encaustic paintings to her reclaimed wood frames, from her “Living Inks” series to the very scenes she depicts, nature is interwoven into everything she creates. “My whole goal with my art is being able to experience nature and the outdoor world,” Meinhold says, “Most of the ways that people interact with art and nature are these blue bird picture-perfect days. What I’m interested in is that nature is always changing. My encaustic work is about capturing moments of change, fleeting moments in time. It’s about the weather that people don’t always see documented in art. Nature’s always changing, which I think is fascinating in its own way, so ephemeral art is just another way of experiencing that, of recognizing how we can experience nature in ways that are different than trying to capture it forever and how we can appreciate it enough to allow that change to happen.”

Meinhold‘s appreciation of ephemeral art harmonizes with Claire Wiley’s documentarian filmmaking style. Together, they tell a story of our connection to the natural world, a moment in time preserved only in memory and film. 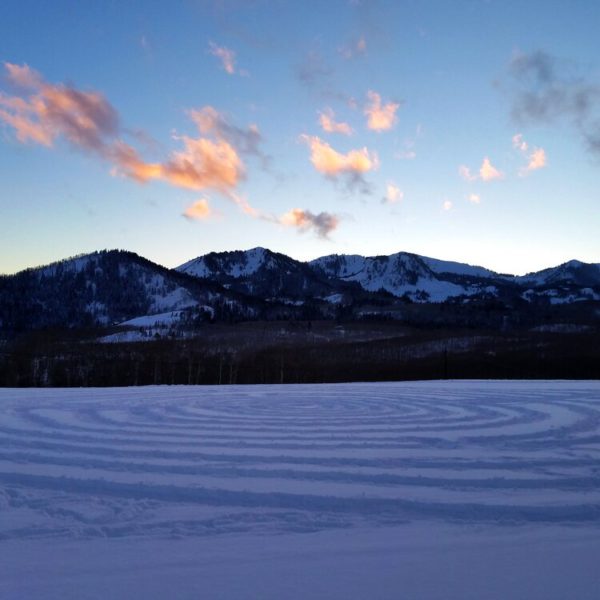 When Claire Wiley first documented this artistic process, film festivals were far from her mind.  It was only when her good friend and fellow filmmaker Jill Orschell suggested that she enter one of her works into an upcoming film festival that she considered the short film potential of this beautiful project. She made a first cut of the film and was floored by the reception it received. So she made some edits and filmed more on the project, ultimately creating “Reverie.” “It’s so rewarding as an artist to have people respond to your film in such a positive way,” Wiley says. 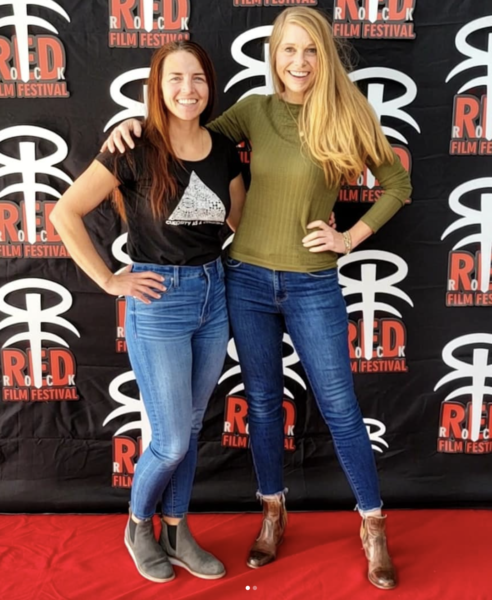 Bridgette Meinhold and Claire Wiley attend a screening of their film, “Reverie” at the Red Rock Film Festival

In contrast to the “adrenaline junkie” films of most outdoor film festivals, “Reverie” poses a quiet moment of introspection to viewers. The connection to nature through moving meditation resonated with audiences far and wide. Wiley explains, “For me, the definition of adventure isn’t just this high energy adrenaline movement, it’s also being a part of the outdoors in a way that is adventurous and connective. What [Bridgette] was doing could still be defined as adventure in the outdoors, but it is quiet and it is peaceful and adventure can be that.” Meinhold elaborates, “I like to think that this is more accessible to most people as a way of experiencing nature,” Meinhold muses, “It’s more of a therapeutic, meditative place to begin from.”

As for the labyrinth itself, we can assume that it has now melted away or else resides beneath several feet of snow. Then again, its transience is part of its beauty. It’s a reminder that the only thing constant is change and that that change should be embraced. Wiley adds, “What I hope people take away from “Reverie” is a reminder of our connection to nature and to not to get caught up in the impermanence of things. Instead, capture and relish a moment, be present and a part of it, but don’t be so attached that you can’t move forward. Hold on to that hope for the future.” Wiley is reminded of her favorite part of the film, after the labyrinth is complete and Meinhold muses, “I’ll think of something else, and I’ll create again tomorrow.”

In the spirit of tomorrow, Bridgette Meinhold and Claire Wiley are already working together on their next film project. We’ll keep you updated on more details in the future. As for now, their film “Reverie” is still in the festival circuit, but we will link to it when it becomes available to the public.

In the meantime, you can find Claire Wiley on her radio program, “This Green Earth,” Tuesdays 9-10am and Thursdays 10 am – 3 pm and through her film company, Eclectic Brews Productions. Plus, check out more of her artist videos with Gallery MAR.

As always, you can find more of Bridgette Meinhold’s work here at Gallery MAR, including her new show “Moments in Between,” opening on November 26.