A Sense of Place with Fred Calleri 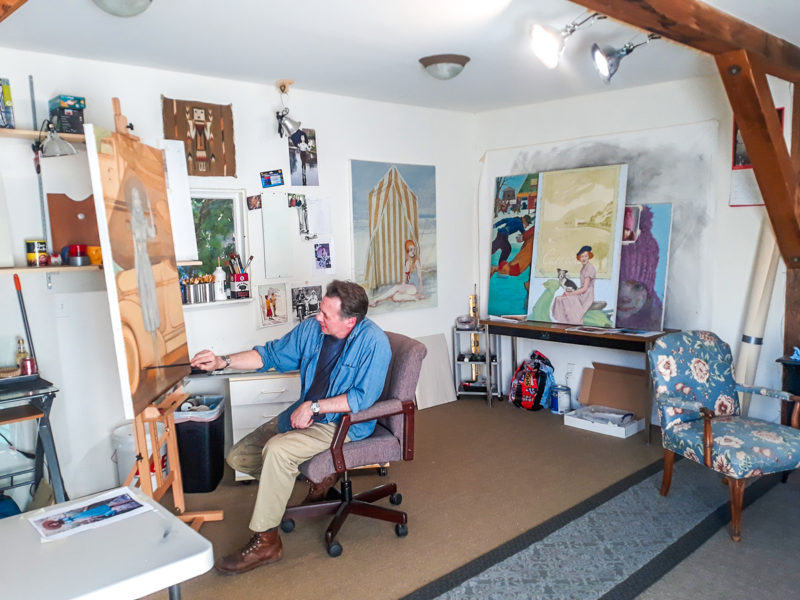 Fred Calleri began his art career painting wherever he could find space. Sometimes that meant collecting art supplies in an old maid’s pantry and sometimes that meant creating a makeshift studio out of his apartment closet. Painting in these odd spaces in tucked away corners of Maryland, Calleri found himself continuously drawn to vintage iconography. Living in Maryland, he had the opportunity to visit Gettysburg and see Civil War reenactments. “I’ve always been a fan of the 40s, 30s, 20s, and even the 1800s,” Calleri says,”so seeing reenactments like that just blew my mind.” Furthermore, Calleri was inspired by his artistic idols, Massachusetts illustrator NC Wyeth and New York illustrator Norman Rockwell, and the now-vintage eras they depicted through their work. The deep history of the Northeast and the illustrators who made the Northeast their home seeped into Calleri’s work, inspiring him to paint with a richness and complexity in keeping with his surroundings.

However, when Calleri decided to commit to his dream of becoming a studio artist, he moved out to the Southwest to do so. His move out west was inspired by the art magazines he loved to comb through. Flipping through the pages of American Art Collector and Southwest Art, he realized that the contemporary artists he most admired and the galleries he most aspired towards were based in the American West. The Western themed paintings he saw in these magazines mesmerized him with their beauty. In between these gorgeous images, he remembers seeing ads for galleries out West, from Scottsdale to Santa Fe to Park City. He remembers thinking, “Oh, that’s where the real pros are. That’s where the galleries are that I want my work to be in.” So Calleri moved to Arizona with that goal in mind and “worked every minute towards that goal.”

In Flagstaff, Arizona, Calleri lived in a 1930s dude ranch in the woods. He saw how his work elevated with the landscape. Between the high elevation, the gorgeous light, the dry air, the snow, the canyons, the desert, Calleri was freshly inspired. “I was finding beauty in the landscape everywhere,” he remembers, “that hadn’t happened to me before.” Calleri couldn’t help but incorporate that airy beauty and wide open spaces into his work. 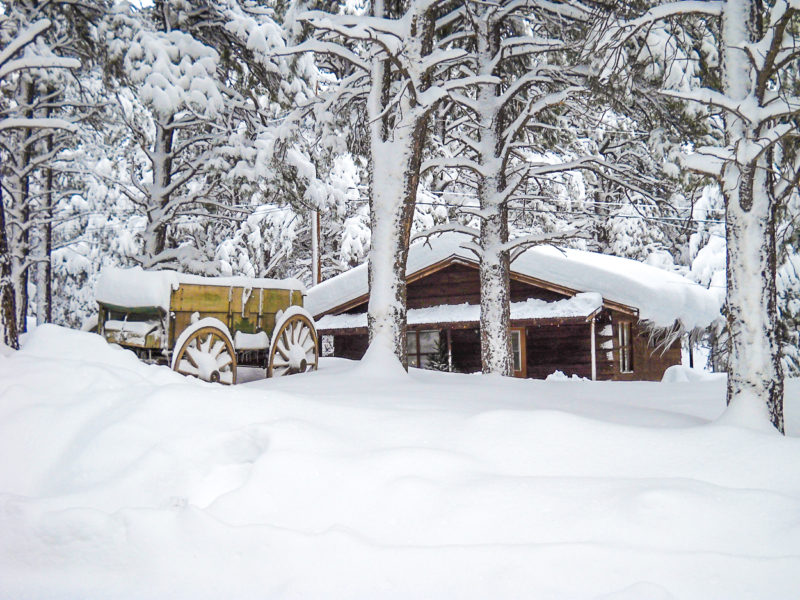 Being in the Southwest inspired Calleri to paint the Western themes he had long admired. “I was still deeply in the mindset of being a southwestern painter. I was painting cowboys and Native Americans. I was going to cattle drives, and I didn’t have a horse, so I just ran behind the cattle in the desert and took pictures,” he remembers, laughing.

It was then that Calleri had his first artistic breakthrough: his now signature quirky distortion. Once Calleri began elongating and exaggerating the features of his portraits, the galleries began to call. 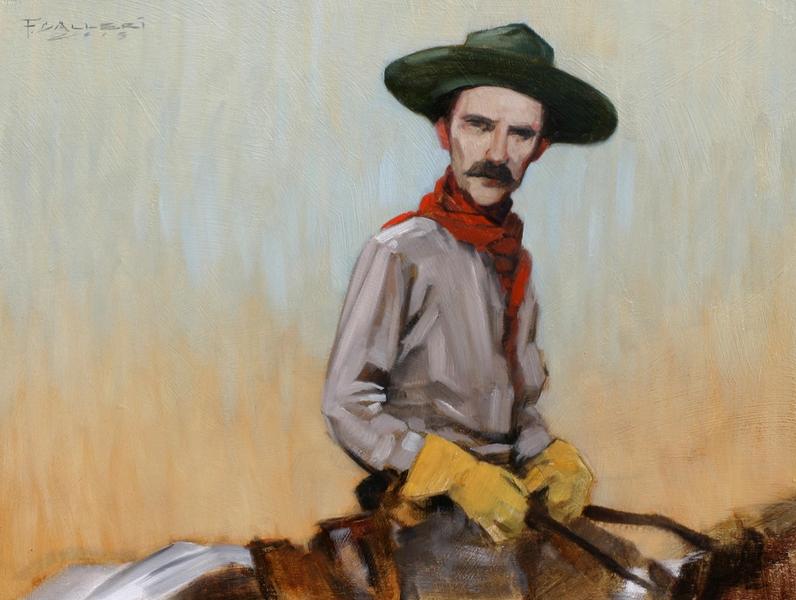 Calleri remembers the elation he felt flying home from his first solo show: “I thought, ‘okay, I’ve done it. I reached my goal.’ It was a wonderful feeling because, even as a child, I always knew I could do this, that I could compete at this level… and when I say ‘compete,’ I don’t mean like in competition. I mean that I had the skill, the drive, the determination, and the desire that you have to have to make it in this profession. Because these artists out here are incredible and being in galleries with them is an absolute pleasure. I’m learning more and more about how deep and beautiful this whole experience is.”

After nine years in the breathtaking beauty of Flagstaff, Calleri moved further West once more, this time to sunny Santa Barbara, California. “I just love Santa Barbara,” Calleri says, “You have mountains on one side, the ocean on the other, and palm trees and beautiful, friendly, sweet, caring people in the middle. In the light of the sunset, the mountains are purple and green and blue and pink. You can see the whales and their babies traveling north between us and the islands just off the coast. It’s amazing in every way.” Inspired by what can only be described as a paradise on earth, Calleri finds his work evolving once again.

For the majority of his artistic career, Calleri has painted from a studio in his home. “Any artist who works from home knows how groovy that is,” Calleri says, “You get your coffee and you groove all day and you can still take care of your cat.” Home studios have been a part of Calleri’s artistic practice since 1996, however, just recently, Calleri decided to take a leap and rent his first studio in downtown Santa Barbara.

Fred Calleri now works out of a little white bungalow just five minutes from his home. What he didn’t know when he began renting his studio is that in the early 1900s – the very era that Calleri often paints – his studio was at the epicenter of American cinematography. Starting in the 1910s, downtown Santa Barbara was at the cutting edge of silent film production. It was, in a sense, the Hollywood before Hollywood. 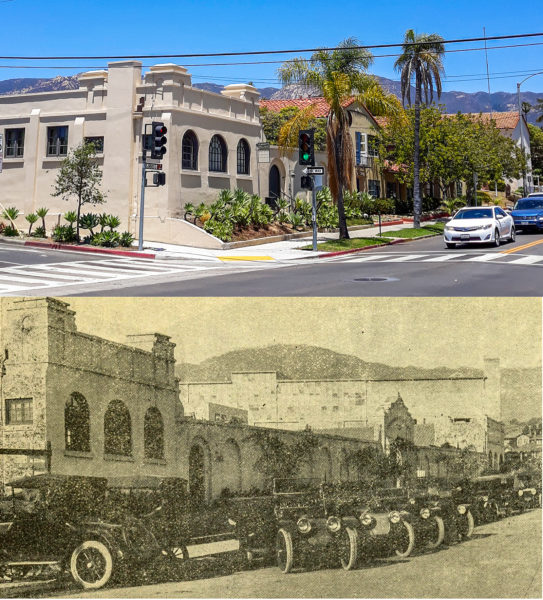 “Flying A Studios,” in downtown Santa Barbara then and now

One of the most famous film stars at that time was silent film legend Charlie Chaplin. Chaplin filmed many of his most iconic movies in downtown Santa Barbara. The buildings that now dot the streets were originally Quonset huts and airplane hangers where the studios would film and the cast and crew would work. 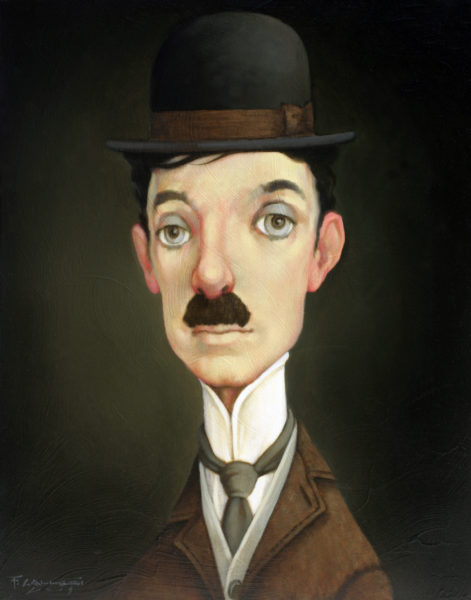 Calleri’s current studio is one of the bungalows where the film crew would work during the production of Charlie Chaplin’s films. “My studio’s just a large square room that’s been remodeled, but the property itself used to have Model T’s riding down the street, so it’s just incredible to be a part of that history,” Calleri muses.

Just three blocks from Calleri’s studio is where the Flying A Film Studios, the original big production silent film studio, was located. This was the studio where stars like Charlie Chaplin and his contemporaries changed the landscape of American cinematography. Three blocks in the other direction from Calleri’s studio is the Arlington Theatre, where the films premiered.

Unbeknownst to Calleri at the time he rented it, his studio is entrenched in the deep artistic history of cinema. It’s only fitting that this history aligns so poetically with the work Calleri now creates in it. Although Calleri has long painted vintage works that serendipitously fit this history, he has noticed a perceptible shift in his style since working within this space. “I’m already in there doing completely different things,” Calleri says. “I’m trying to be more dynamic, more powerful with color and with texture. I’m still painting vintage, but this is me pushing out a little further. I’m excited about the new studio giving me a big, inspiring room to just play. It’s my beat laboratory.”

Perhaps Calleri can somehow sense the creative history of the space, reverberating off the walls, echoes of an artistry from the era he paints. Or perhaps his experimentalism is of an entirely new breed, a layer of inspiration found elsewhere to be woven into the rich tapestry of this place. Regardless, Calleri feels his own excitement building over this new body of work. “It’s all just happened within the last few months,” he says, “and it’s going to lead to larger, more experimental things for me. I’m really excited about it, and I think that Maren Mullin and her collectors at Gallery MAR will be, too.” 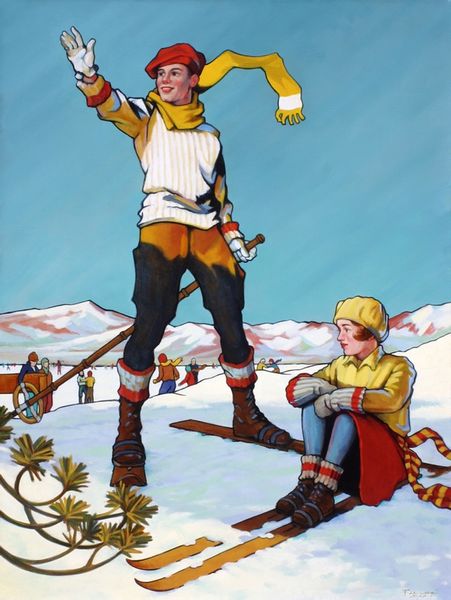 In this new space, Calleri feels energized about finding a good balance between maintaining his beloved style and reaching for new territory. He credits gallery owners like Maren Mullin for allowing him the breathing space and the confidence to do just that. “Maren has always welcomed what I do,” Calleri says, “almost no matter what. It helps me to push… Do you know what I think it is about Maren? She actually loves art. It’s not just all about business.”