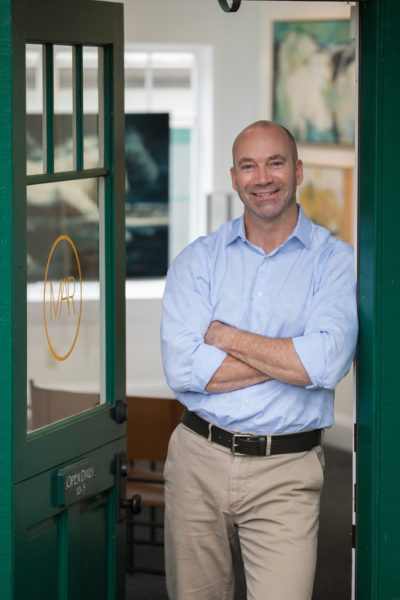 On June 10th of 2019, Gallery MAR officially opened a second location in beautiful Carmel-by-the-Sea, California. It had been a dream long in the making for both Gallery MAR owner Maren Mullin and her new business partner, Thomas Cushman. To know Gallery MAR is to know and adore its owner, Maren Mullin, but we wondered, how well do our collectors know Thomas Cushman? Well, it’s our privilege to give a proper introduction to the fascinating life, warm personality, and keen professionalism of Gallery MAR Carmel co-owner Thomas Cushman. After all, as Maren puts it, “I would not have partnered with just anyone: he’s a gem.”

“Maren, I’m thinking of opening a gallery in Carmel, and I want you to talk me out of it.”

Thomas Cushman has managed to fit multiple lives into one lifetime. At least it seems that way. From years in journalism and public television to a career as head coach for the US Olympic Speedskating team to a long and varied career working in art galleries, Cushman has mastered it all. So when Thomas Cushman called Gallery MAR owner Maren Mullin for advice on opening an art gallery, she couldn’t help but jump at the opportunity to partner with him on this next exciting life chapter. 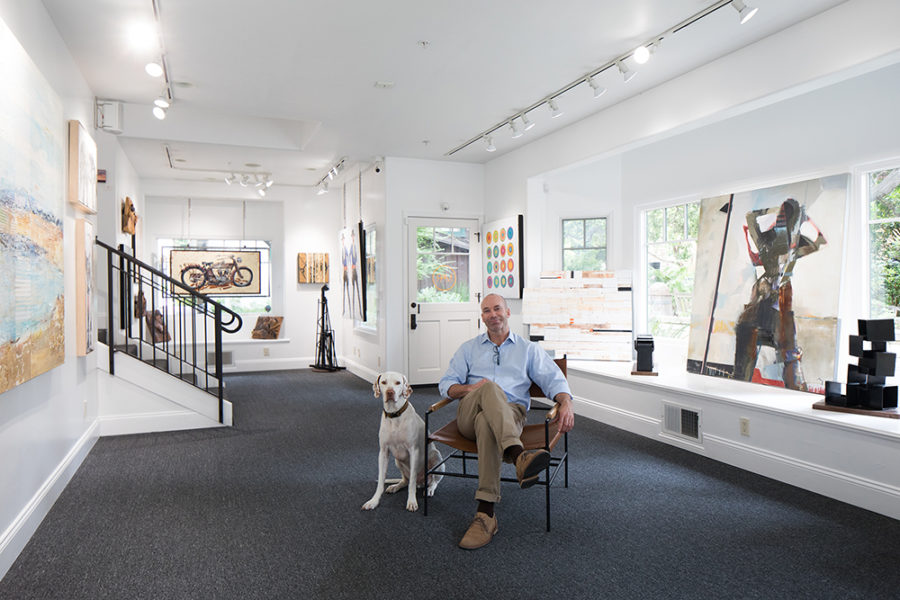 Thomas Cushman and his dog, Casper, inside Gallery MAR Carmel-by-the-Sea

“Maren, I’m thinking of opening a gallery in Carmel, and I want you to talk me out of it,” Cushman remembers his opening line with humor.

He had been looking for a business partner for this next venture and was starting to get cold feet when he thought to ask Maren for advice. He recalls, “I thought, ‘oh, I’ll talk to Maren because she’s done it before. She knows what she’s doing. She opened her gallery right before we went into the 2008 recession, so she knows how to get through difficult times. She’ll give me some great advice and tips’.” Her response took him by surprise: “well you know I’ve always wanted to have a gallery in Carmel, right?” “I had no idea,” he laughs, “it was almost like kismet.” 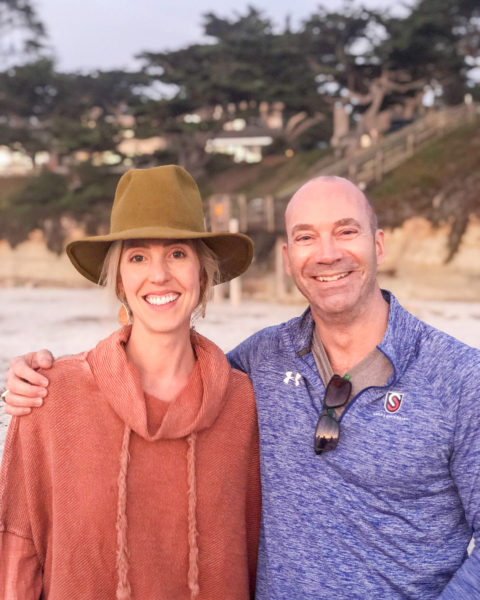 Maren Mullin and Thomas Cushman first met at Meyer Gallery in Park City back in 2007. Mullin was stepping down as Director of Meyer Gallery to open her own gallery down the street (spoiler alert: Gallery MAR!) and Cushman was hired to replace her as director. The two became friends after several months of training on the job and maintained their friendship throughout the years. Cushman remembers, “just in working with Maren, I knew how professional, responsible, and… for lack of a better word…”on-her-game” she is. As for her gallery itself, I love her collection and I love the way she hangs her gallery. It just seemed right from the get-go, I loved her gallery, so going into business with her, it was just such a great fit and such a great feeling… It really is a wonderful partnership,” Cushman beams of his relationship with Maren and Gallery MAR Park City, “I couldn’t ask for it to go any better. Maren’s always positive and always supportive. I feel incredibly lucky to be working with her.”

“This is it. This is what I want to do for the rest of my life.”

This new business venture was the perfect culmination of a few lifetime’s worth of successful careers for Cushman. Beginning his career in journalism, he went to work for public television for seven years. Cushman humbly mentions that he “also had a background as an Olympic athlete” on the ‘88 Olympic Speed-skating team. He left journalism to start coaching Olympic speed-skating full time, which brought him to Utah for the 2002 Olympic Games, coaching athletes to Olympic gold medals and world records. 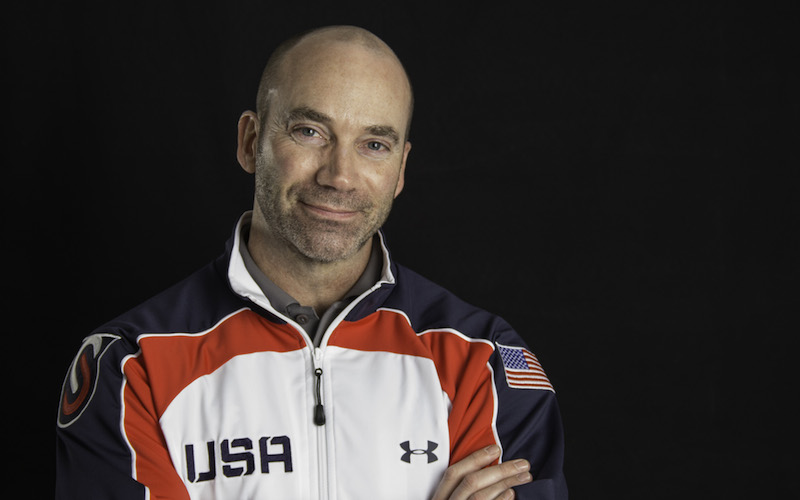 Thomas Cushman was the US Speed-skating coach from 2014-2019, here photographed by Gary D’Amato for the Journal Sentinel in 2014.

Throughout this time, Cushman explains, “when you’re in an international sport, you have to travel constantly, all the time, all over the world. I would always take time to go to museums and galleries wherever I was. It’s always been a passion for me.” So when he resigned from coaching in 2006 to find his next great pursuit, Cushman decided it was about time that he “participate in the art world instead of just observing it.” He remembers fondly the feeling he had upon entering this next phase: “I just thought, ‘This is it. This is what I want to do for the rest of my life’.” A few galleries later, Cushman found himself Director of Meyer Gallery and new friends with Maren Mullin.

Cushman believed his director position to be his career’s final home, but then the International Speed Skating Organization approached him in 2014 to coach again. While he initially declined the offer, he eventually decided to reopen that chapter of his life and returned to coaching. That is, until 2019 when he made that fated phone call to his friend Maren Mullin about the dream of an art gallery and a beautiful little city called Carmel-by-the-Sea.

“My favorite part of my job is talking to collectors about the incredible artists that we have.”

“Carmel-by-the-Sea actually started out as an artist colony,” Cushman informs me. This artist colony provided an alternative to San Francisco or Los Angeles, with many world renown artists and writers finding an inspirational space to create within its peninsula. Artists like Georgia O’Keeffe, photographers like Ansel Adams and Edward Weston, and writers like Robert Louis Stevenson. Nowadays, the city of Carmel boasts somewhere between 50-100 art galleries. 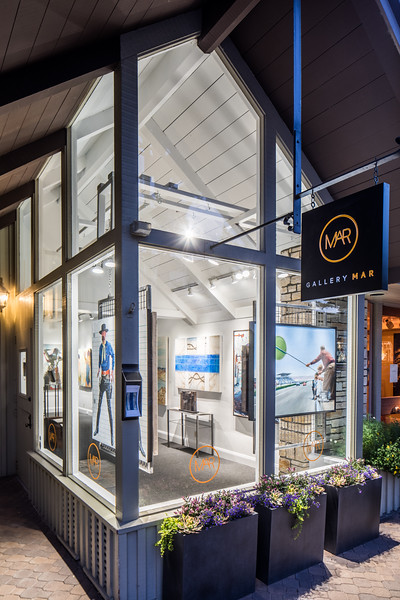 This creative art colony turned art gallery hub proved to be the perfect spot for a new Gallery MAR location. Despite the many galleries that dot the coast in Carmel, Cushman felt there was not only room, but a need, for a contemporary art gallery among these spaces. “I felt like there was a niche that wasn’t being filled here, and I thought bringing in a contemporary gallery like what we see in Park City might be really successful here.” The success of Gallery MAR Carmel-by-the Sea has certainly proved Cushman’s theory to be true. 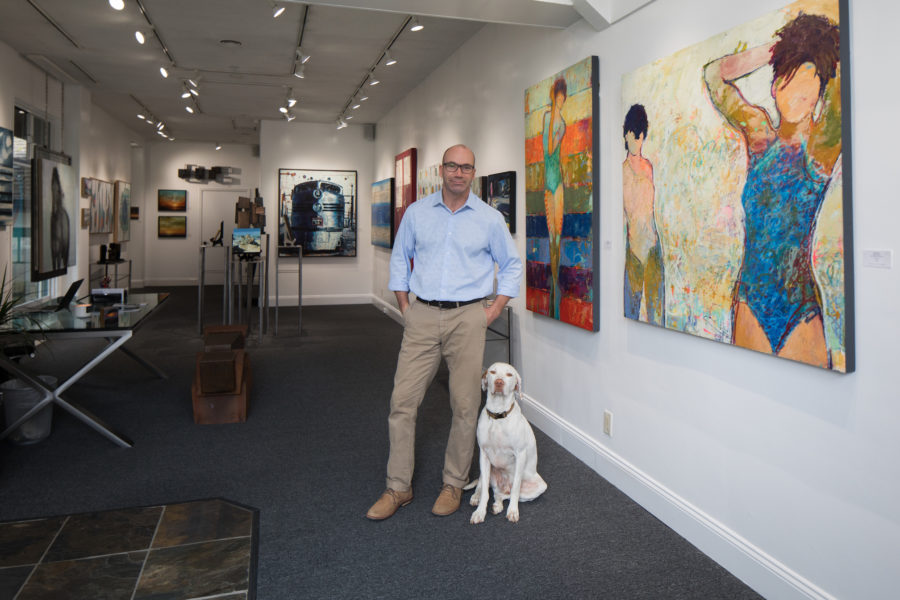 Thomas Cushman and his dog, Casper, inside Gallery MAR Carmel (anyone recognize a few artists from our Park City location?)

Now Gallery MAR Carmel-by-the-Sea represents around 35 artists, a handful of which are also represented at our Park City location. Its stunningly beautiful coastal location provides a unique space for contemporary artists “who engage specifically with the coastline and the ocean and California-based landscape. My favorite part of my job is talking to collectors about our artists. I just love educating collectors about these incredible artists that we have.” Between a rewarding collaborative partnership between owners and galleries, a breathtaking location on the California coast, and a gallery proudly housing nearly 35 fabulously talented artists, the dream of Maren Mullin and Thomas Cushman has officially been ushered into reality.

We would like to thank Thomas Cushman for this interview, even in the midst of this strange and uncertain time. From all of us at Gallery MAR (from Park City to Carmel), we wish you safety, health, and peace for you and your families.