#PotteryIsPolitical: A Conversation with Horacio Rodriguez 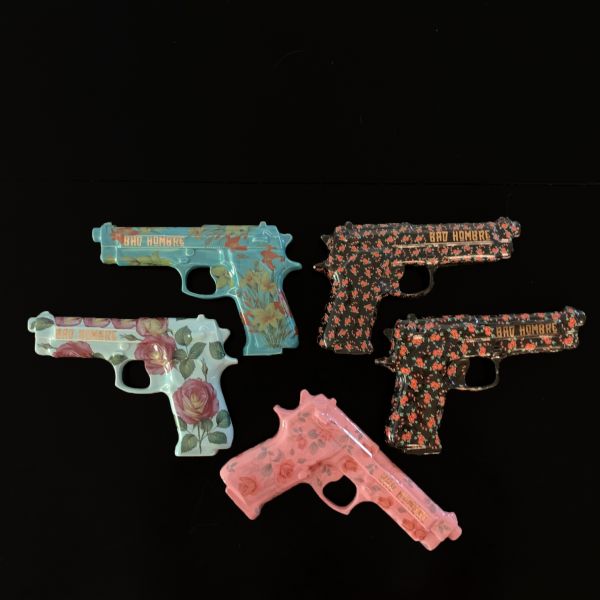 The unique, captivating work of mixed media artist Horacio Rodriguez has captured our collector’s attention since the day he joined the Gallery MAR team.

Originally from Houston, Texas, Rodriguez moved to Salt Lake City in 2016 when he received the Morales Teaching Fellowship from the University of Utah. Since then, he’s continued to develop his studio practice, blending clay sculptural work, with photographic elements and mixed media painting techniques.

Such fascinating artwork is telltale sign of a fascinating artist, so we sat down with Horacio Rodriguez for a conversation about his life, work, and process: 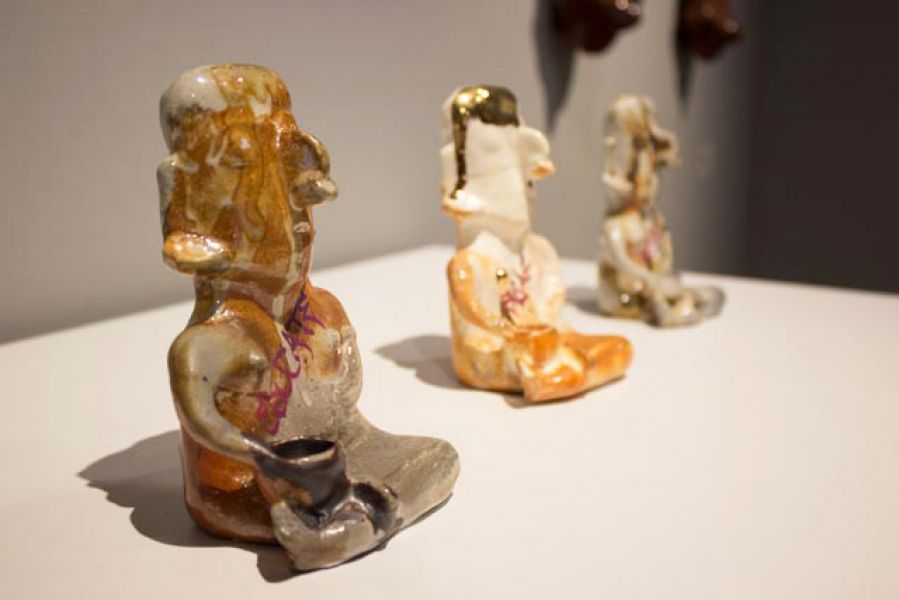 Gallery MAR: When did you know you wanted to become an artist?

Horacio Rodriguez: Probably since I was a little kid. In high school, my mom worked in the museum district, so I spent my days wandering around museums and taking art classes. I took photography classes and drawing classes and just loved them.

GM: What inspires you to create?

HR: Going back to when I was younger, I always had this drive to make things. I loved being able to envision something in mind hear, take it through a process, and come out with this object. There’s honestly nothing I enjoy doing more than manifesting something into a physical object.

When I discovered clay, it just felt right to be building with my hands. I was drawn to the physical process of building. With clay, there are so many different ways to approach it, I’m always discovering more. Like when I make the decals on the Bad Hombre guns, each piece gives me 10 more ideas, so that the act of making and creating and bringing them to life actually inspires more making and creating. I started incorporating my photography into it, too, melding my two loves together to create my style. 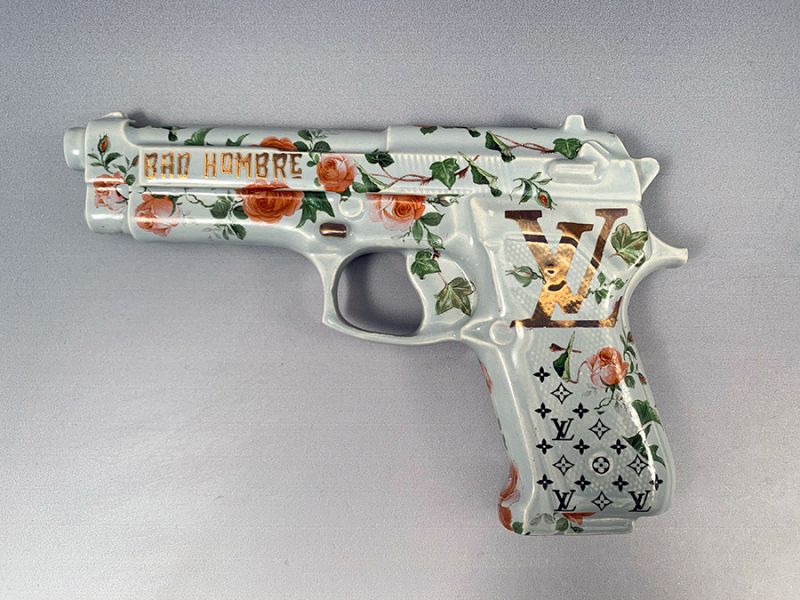 GM: How would you describe that artistic style?

HR: Well, I do a lot of really political ceramic work. One of the hashtags I use and love, #potteryispolitical, is meant to prompt people to think about current issues. I have a show at Granary Arts in Ephraim, Utah right now called “Subversive Souvenirs” (up through January 24th) that dives more into political issues. I’ve been surprised with the response my work has received. I was expecting a little bit of pushback to the work because of its political nature, but it’s actually been getting a really positive reception.

GM: In that vein, could you talk a little more about the role cultural, political, and religious signifiers play in your work?

HR: Sure, for instance, the pre-Columbian figures in Gallery MAR all started out as artifacts in a collection at The Utah Museum of Fine Arts. I started collecting pre-Columbian artifacts 5 years ago. Then I began 3D scanning them and using those 3D scans to make molds. I make casts out of clay from those molds, which is what you see in Gallery MAR. They’re all attempts to connect with my cultural heritage from Mexico, with direct influences to immigration and US border issues. 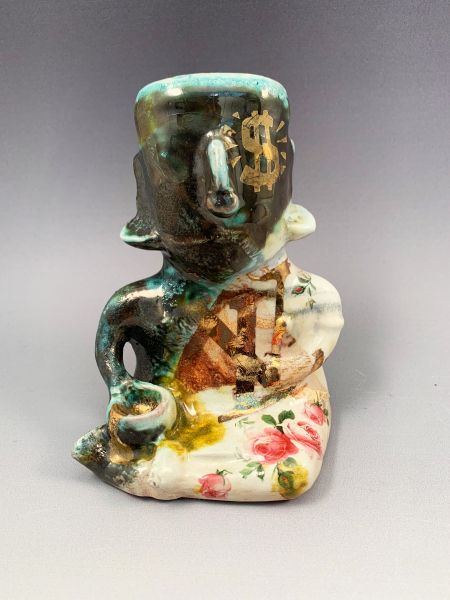 The Bad Hombre pieces are something that came up during the election cycle. They’re meant to be slightly sarcastic and humorous, so that he pieces make people laugh as much as it makes them think. I mean, here you have these guns that can hurt and kill, but they’re decorated with flowers and pastel and pretty things. You can also see in a lot of the work an appropriation of cultural symbols (like Gucci, Louis Vuitton, etc.). A lot of big companies have appropriated different symbols and cultural things from these groups I’m representing, so it’s my way of reclaiming them, or taking them back. 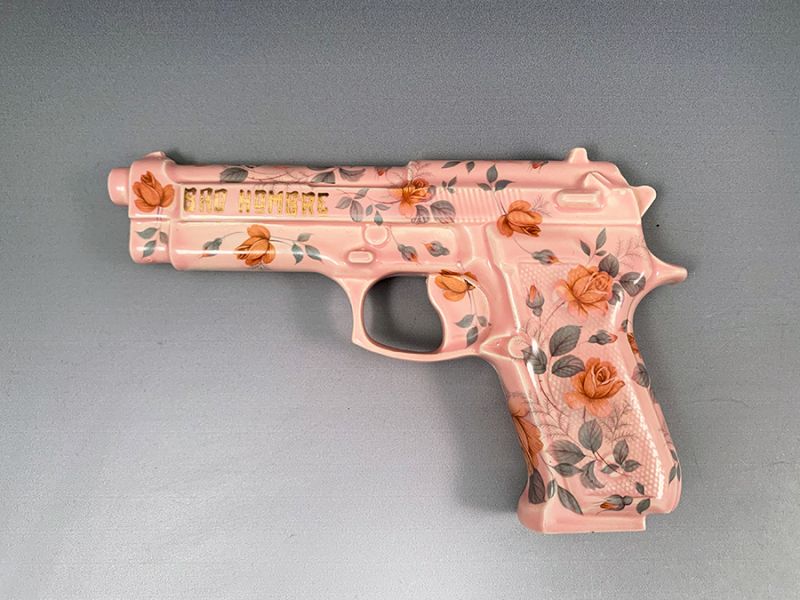 GM: You tend to work in series. What inspires these series shifts and how does it influence your artistic process?

HR: Well with ceramics, it helps to work in series. Most of the objects I make take a lot of work to create. For instance, the Bad Hombre gun pieces are a 2 piece mold. The pre-Columbian figures are each about 10 piece molds. So by making multiples, I can rework an idea. I look at each multiple as a painter might look at a blank canvas. I can always move on to something else, but I never feel like I’ve reached a stopping point with any one mold. In a way, I’m never finished because I can always come back to slip cast objects and treat them like new canvases again.

GM: Wow, I had no idea. Those original molds must be very valuable to you then.

HR: They are – I hang on to all my original molds in my studio in case I ever want to go back to them. 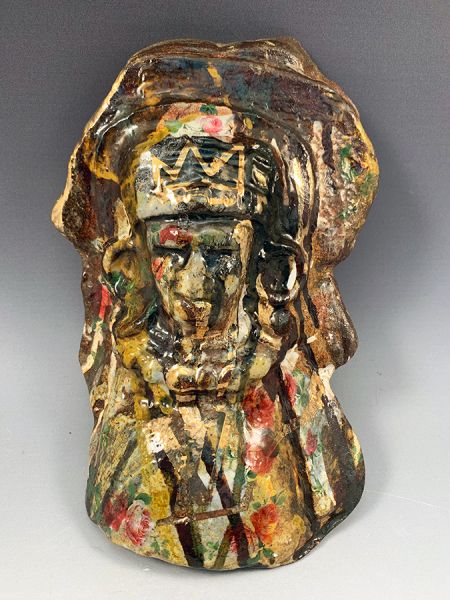 GM: What is it like creating work for an art gallery like Gallery MAR as opposed to a museum where your work more often resides?

HR: I’ve really enjoyed making work for Gallery MAR. It allows me to reach an entirely different audience – people I wouldn’t normally be able to reach. Maren and her team sold a lot of the Bad Hombre pieces a couple of months ago and they went all across the globe, to Germany, to Hong Kong. I’m really grateful for that. Now my work occupies a space in people’s homes. They interact with it on a daily basis. There’s something really special about that.

GM: We would like to offer a special thank you to Horacio Rodriguez for his time and great conversation.