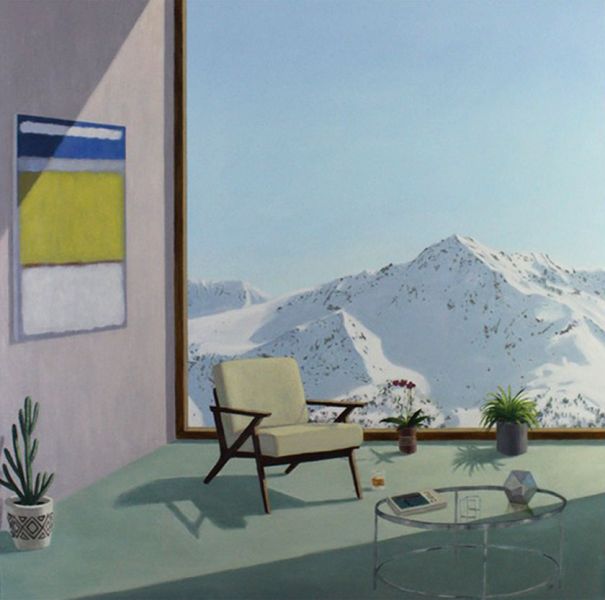 Raised in a creative family, Patrick St. Clair demonstrated an interest in the arts from an early age. Although art was always an important aspect of his life, it wasn’t until after he graduated with a history degree that he started to pursue painting on his own. He mentions that he always appreciated “painting as a form of expression.” He explains further, “I liked the solitary nature of it: you and the blank canvas. I also liked the idea of freezing a moment and an idea in time.” Upon the suggestion of a professor, St. Clair began to further educate himself about painting, leading to his decision to go back to school to pursue his MFA in Painting. 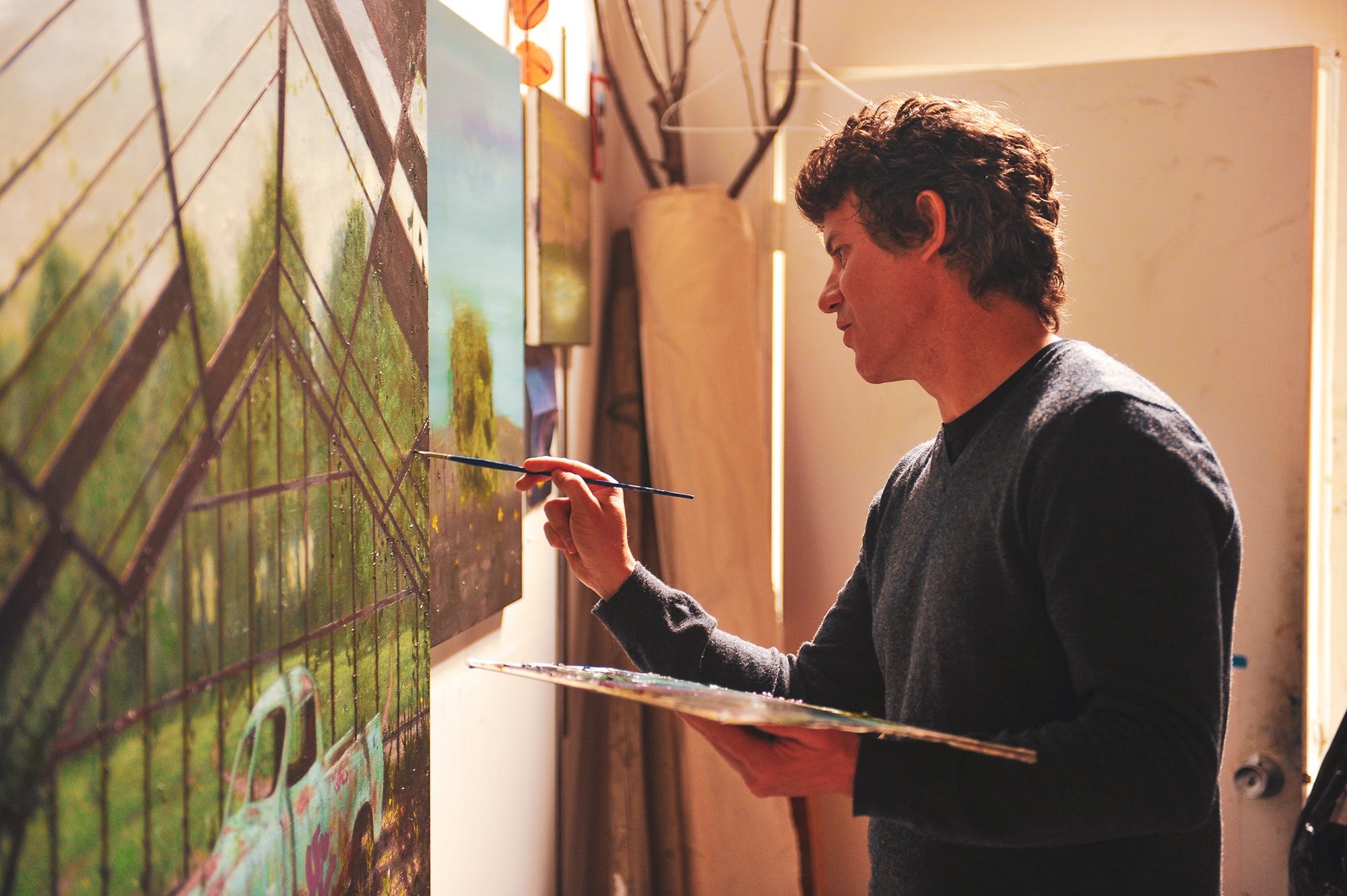 Patrick St. Clair in his studio

His painterly journey began in the figurative realm, with much of his early work depicting the figure at the precipice of a drama or the pinnacle of a decision. The figures were often presented, “at impasses where action is required or where something has just occurred. They are often shown in solitude with situations or predicaments that seem at once ridiculous but imbued with a hint of frustration or discord.”

“I like the solitary nature of painting: you and the blank canvas…freezing a moment and an idea in time.”

This fascination with narrative and “the passage of time” still endures, even as St. Clair transitions away from purely figurative work. In recent years, St. Clair’s work focuses less on the figure and more on the exploration of interior spaces. He explains how this transition has opened up his process:

“I wanted to make work that was as much about light, color, and form as the idea behind it. Making interior paintings with signifiers (paintings, guitars, records, etc.) still allows for an identity or human presence in the painting… [but] in a more organic way now.” 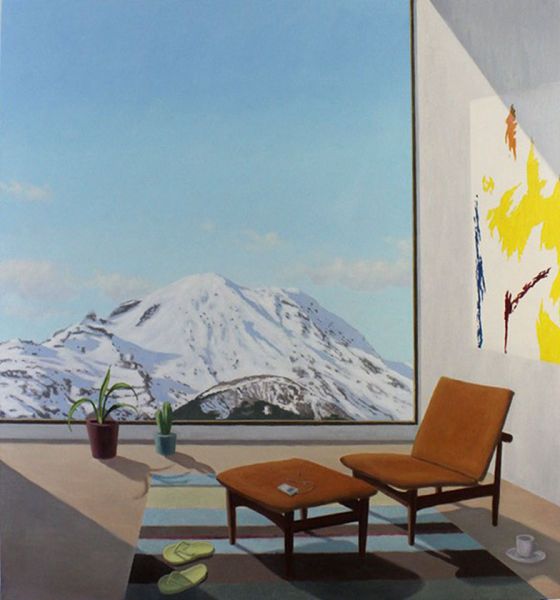 These signifiers in his work reflect the artists’ fascination with a historical narrative, or “the idea of something being gone but still there at the same time.” As viewers, we see these narrative hints in the pair of flip flops by the chair or by the half-sipped glass of whiskey on the floor.

His work still gives his viewers the same feeling that the artist achieved through his figurative work – that feeling that “something has just occurred” – but it’s a narrative told in a slower, subtler, more nuanced way. The more time spent with a painting of St. Clair’s, the more these signifiers reveal themselves to the viewer, cleverly requiring a passage of time to appreciate the narrative elements of a passage of time.

“Painting can take you to other spaces, like traveling without leaving home.”

One of the signifiers most present in St. Clair’s paintings is that of music. Whether it’s a guitar leaning against the wall, a collection of records in the corner, or an iPod on a couch, music makes a frequent appearance in St. Clair’s work. St. Clair elaborates:

“Music has always played a big part in my life. I get inspired listening to music, I play guitar, and I record my own music as well. Music and painting are very different, but they often cross-pollinate for me and my process. I listen to music in my studio, often picking songs to suit my mood. I also keep a guitar in the studio for breaks. Both music and painting can take you to other spaces, like traveling without leaving home.” 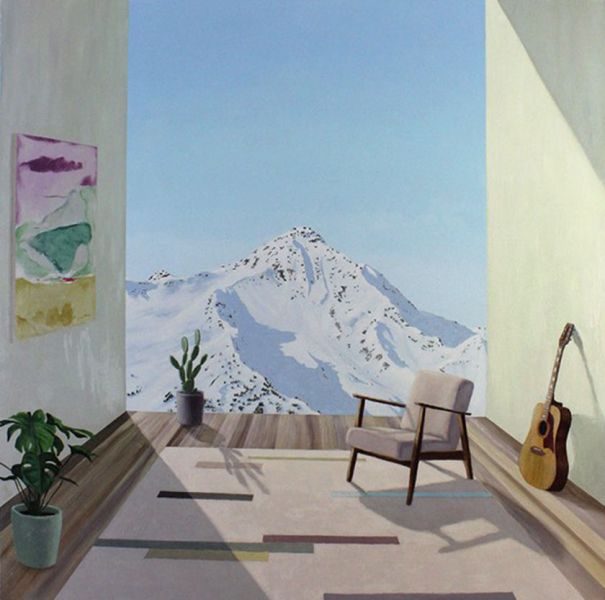 Perhaps more overt than these cultural signifiers is the way St. Clair’s new work juxtaposes wild, outdoor spaces with modern curated interiors, giving his work a unique, almost genre-less feel. This duality of nature and the man-made world manifests itself in the artist’s own experience. While St. Clair spent most of his life “in urban spaces, looking for abandoned spaces to explore,” he also bore a strong desire for “being in the open” and “getting out in nature.”

While the natural, rugged landscapes in the work remain seemingly untouched by cultural influence, nature’s influence is abundant in the interior spaces. Plants dot the room and the spaces are flooded by the out-of-frame sunlight — the work’s only source of light.

Even with this contrast, the two scenes never quite seem in discord, but rather harmonize with one another. Both the landscapes and the interiors are handled with the same degree of detail and the same soft color palette, serving as soothing reminders of the potential harmony of wild places and beloved spaces.

A special Thank You to Patrick St. Clair for responding to our interview request, all the way from France.