The Most Expensive Works Sold at Auction This Year

With 2018 coming to a close, we are celebrating the end to our ten year anniversary — and looking forward to the next ten, of course.

It’s always fun to look at the big, really big, successes of the art world too. Like the most expensive works sold at auction this year!

Thanks to Mutual Art we have the list. Enjoy, celebrate — or cringe — as you take a look at the list below. Which piece would you most like to hang in your own home? 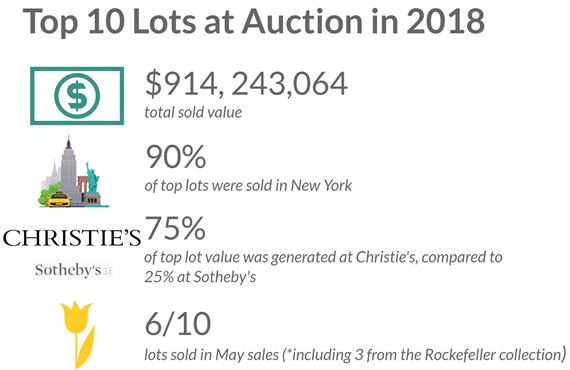 Whilst nothing scaled the stupefying heights of last year’s $450M sale of Salvator Mundi, 2018 nonetheless saw plenty of rambunctious art-market activity. Using MutualArt data, we bring you information on the ten biggest works sold at auction during the last twelve months.

Across the world’s top auction houses, from the big sales in February and May through to the blockbuster November season, it was another year of ostentation and excess in the art market. Records were smashed, estimates exceeded, and pictures shredded. As the gavels are downed and the dust settles, the figures from the last twelve months bear interesting reading.

Impressionist and modern works of art dominated the headlining auction lots in 2018, with four of the top ten coming from key evening sales in this category. Major collections drove five of the record prices, including the collection of Peggy and David Rockefeller (three lots) and the Barney A. Ebsworth collection (two lots).

The only top lot to come from a dedicated Post-War & Contemporary Art Evening Sale was David Hockney‘s record-breaking Portrait of an Artist (Pool with Two Figures) from 1972, which sold for $90.3M in New York in November.

The top ten works came from nine artists; Picasso was the only artist to have more than one work in the top ten – both the second highest price (Fillette à la corbeille fleurie, 1905, $115M) and the tenth (Femme au Béret et à la Robe Quadrillée (Marie-Thérèse Walter), 1937, £48.9M/$68.7M). This extraordinary nude was auctioned back in May at Sotheby’s New York. Its final realized price represented the second-highest price paid for a Modigliani in the last decade after Nu couché which fetched over $170M in 2015. Once owned by Gertrude and Leo Stein, this refined standing-nude was part of this year’s auction of the Rockefeller collection. Its palette shows a piquant tension between Picasso’s rose and blue periods, the strange flattened profile-perspective and the girl’s ambiguous expression cut through its undeniable poise with an unsettling air. The blockbuster lot from the Barney Ebsworth auction late in the year, this was the highest ever auction price for an Edward Hopper painting. Hopper’s scarcity at auction meant that the sale of this haunting piece was one of 2018’s market highlights. This painting had long been a beloved favourite amongst the art-world public, and this year it became the most expensive single artwork by a living artist in history. Ten years ago, this painting sold for around $60M at Sotheby’s New York. In May of this year, over $20M was added to that price as it changed hands at Christie’s. It’s one of the most significant pieces of abstract modern art in history, a revolutionary composition with wide-reaching influence. After Picasso’s Fillette (see above), this erotically charged, watery colorscape was the most expensive lot at May’s auction of the Rockefeller collection. Despite an enormous number of works being available on the market, Matisse regularly commands very high prices. His top works sell for an average price of nearly $50M. Bidding action at the Rockefeller auction drove the price of this canvas far up above that average. The understated, rarefied poise of Brancusi’s sculptures is reflected in his relatively scarce presence at auction. Seeing this elegant bronze feels like catching the grace of a nude figure in a blink of light. It’s quintessential Brancusi, and the price it fetched reflects this. Though it commanded a large price, this lot was representative of a rather muted round of November sales in New York, selling bang on its mid-estimate. Picasso’s second appearance on this top-ten is an iconic portrait from 1937 which sold early in the year at Sotheby’s London.