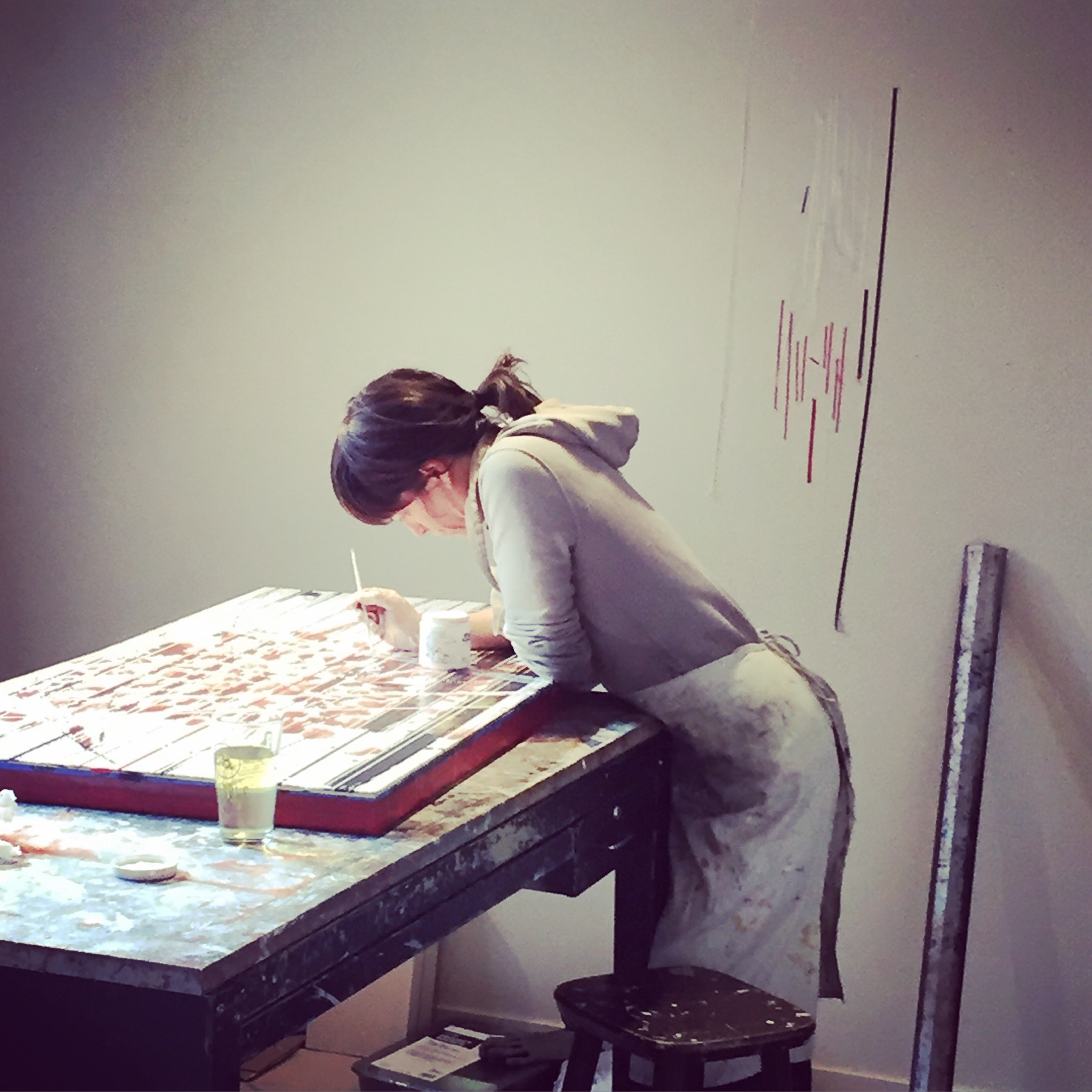 “I’m a native New Mexican. I was born and raised here; my heart is here; I will always come back here. This place is kind of the heartbeat of my life…but I still feel totally outside of it in a very interesting way…”

Santa Fe painter Nina Tichava was born in Vallecitos, New Mexico in the early 1970s into an eccentric lifestyle. Her “hippie parents” moved to the area from San Francisco in the 1960s, settling on a piece of land north of Ojo Caliente with a few dogs, cats, a horse, and a zeal for living on the fringe. Nina was one of about five or six Anglos in the school system, or gringos as they were named by the locals, and at a very young age learned what it meant to be an unwanted outsider in the tiny Hispanic community.

“Even though I grew up alongside it, I was separated from northern New Mexico culture,” explains Nina. “Which is hard because my art is heavily influenced by Native and Hispanic culture and art.”

As a process painter, Nina’s work is labor intensive with many layers that build over time. A base pattern is drawn out with acrylic mediums and archival tape, and the artist then follows the forms as she incorporates geometric architecture, vibrating lines, and botanical silhouettes. Nina uses hand-cut stencils to create recurring forms, and their collision within the work references the intersection of the natural world and man-made structure. The final step is to freckle the piece with tiny beads of paint that contribute to its tangible texture and hypnotic rhythm. 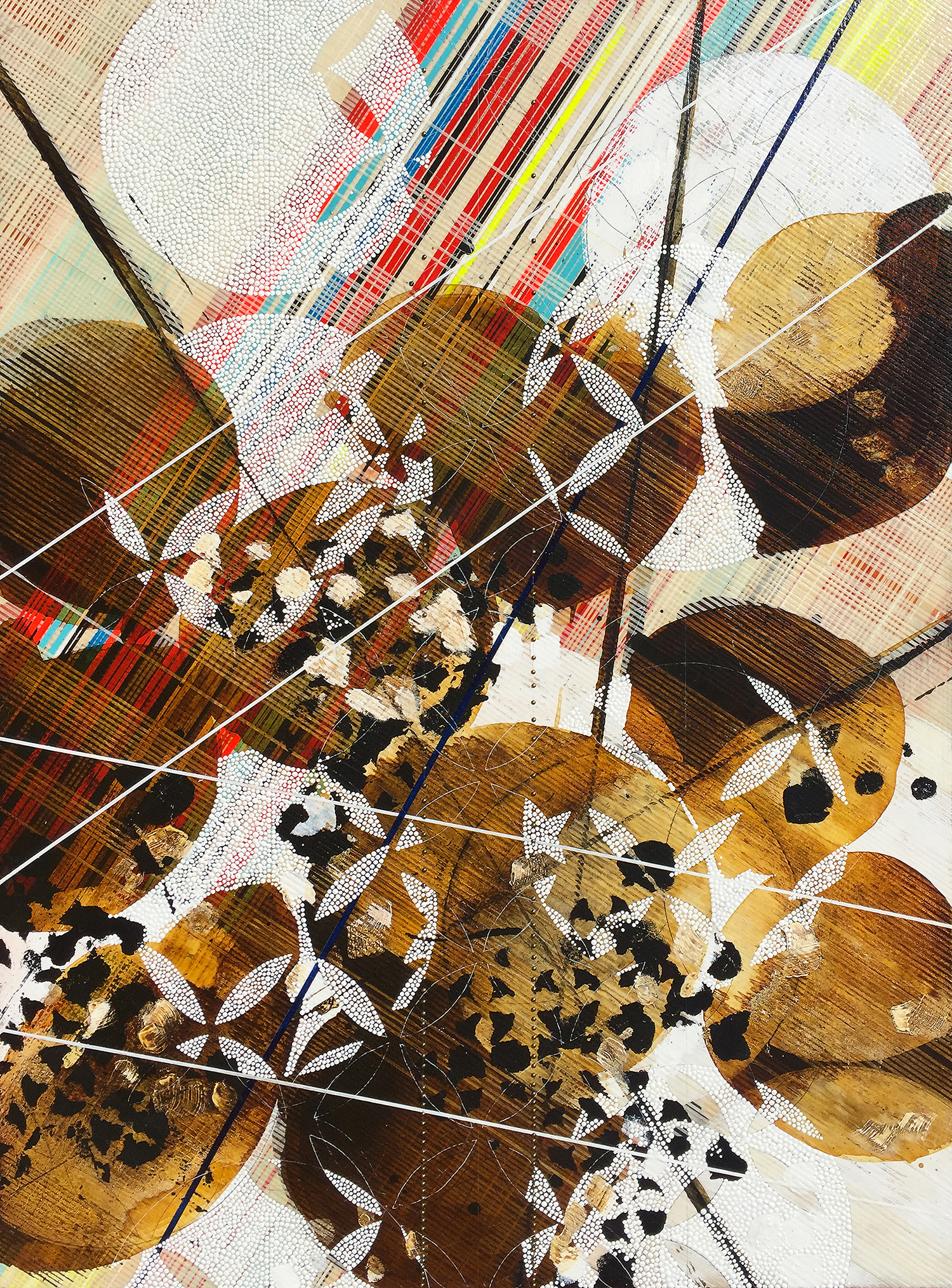 The result of the artist’s painstaking process evokes a feeling of complex harmony as the different aspects of construction coalesce across the painting surface. From a distance Nina’s designs seemed contrived to the point of being machine made, even though she rarely uses rulers or measuring tools. However an up close observation reveals the painterly abstraction of the work and spontaneity of the artist’s hand. Each imperfection is cherished as an important informer of the painting’s next layer and its overall organic quality. This intrinsic connection to process and intensive creative labor is a big part of Nina’s work, which in turn blurs the boundaries between the disciplines of fine art and craft. These two traditions carry a very different value in the art world, with painters and sculptors given more clout than weavers and quilters – for example. Nina, along with many other artists today, disagrees with this hierarchy and questions the devaluing of age-old craft traditions that require great skill and labor. detail image of a painting in Nina’s studio. This emphasis on craft and tribute to process is a direct influence from Nina’s studies at the California College of the Arts (or Arts + Crafts as it was named at the time) in San Francisco, as well as her upbringing in northern New Mexico. Her father was a construction worker, photographer, and weaver along with her mother who was part of a local weaving guild formed of predominantly women weavers from across northern New Mexico. The guild was part of the larger crafting community of potters, bead makers, textile artists and more; locals relied on these traditions to support their families. Nina watched and helped her mother in the guild as she dyed the wool, hung it, spun it, and wove it. Her mother eventually went on to work as a head designer for Char, a luxury clothing company that contributed to the rise and popularity of “Santa Fe style” in the 70s and 80s. Her mother created stencils and hand painted designs for the company, which was known for vibrant southwest patterns, fringe handbags, and painted leather jackets. Unable to afford day care, she brought Nina to work with her who assisted in production. The stencil and printmaking Nina did during this time subconsciously stuck with her and is now present in her own artistic process.

The craft heavy influence and native environment of Nina’s childhood is most notable in her Weaving Series, but is the underlying inspiration for all her work. The shapes, patterns, and color palettes that show up in her paintings flow from a place of love and respect for the southwest culture she was immersed in as a young girl. Even if it was from eyes of an outsider, Nina grew up watching Native and Hispanic traditions and struggles with the fact that she can’t quite call them her own.

“You’re not really invited into Native culture unless you’re asked in, and that’s not my community at this time,” explains Nina. “But the imagery is a steady heartbeat throughout my work; it’s something I can’t deny is there and it’s something that I love.”

Nina has shied away from citing native art and craft as inspiration for fear of it being labeled cultural appropriation, but she is now interested in openly connecting her art with its traditional influences. Over the past few months and in the wake of the recent election, Nina has felt an even stronger responsibility as a female artist to express her own story and unique perspective as someone who has experienced the wrong side of an ugly racial divide. Memories from her childhood, such as the harsh image of the spray painted words “gringos go home” or the startling pain of thrown rocks, have resurfaced as she (and the rest of our country) becomes painfully aware of the ridicule many Americans still feel because of racial differences. “I don’t know exactly why I feel like I want to talk about it now,” says Nina. “Do I want someone to finally say yes, you’re a daughter of New Mexico? Is it ego? I’m not sure.”

Nina Tichava, “The Sun Loved the Moon So Much (Peartree),” View 2

The idea is taking shape for Nina to create a museum level exhibition of works that recreate or draw inspiration from the designs of the Native weavers of her childhood. These women crafted intricate and beautiful weavings from dye to loom; yet the fruits of their labor were never considered “art.” Through her paintings, Nina can celebrate their craft while also paying homage to the root of her own artistic inspirations. The idea is still in its infancy as Nina contemplates ways to connect her work to this culture in a respectful way, and to seek out the right venue. Regardless of the outcome, Nina is at a point in her career where she is ready for deeper stories to emerge from her aesthetic and to push boundaries as a visual artist.

“Looking at an abstract pattern on a wall will not necessarily convey any of this,” she says. “My work is sometimes dismissed as just being decorative; I’d love for someone to access a bit more depth and content – and that’s up to me.”