At the 2015 Air Force Association National Aerospace convention, Neary is scheduled to be presented the Gill Robb Wilson Award for Arts and Letters Sept. 14 in National Harbor, Maryland, where he will also unveil “That Others May Live.”

“Deterrence on Demand” depicts Airmen of the 307th Bomb Wing, Barksdale AFB, Louisiana, generating their B-52 aircraft for a nuclear exercise with aircrew, maintainers and security forces members. The 307th BW reached a significant milestone when it became the first Air Force Reserve unit in Air Force history to be nuclear certified, after it excelled during its initial nuclear surety inspection.

“That Others May Live” documents U.S. Navy SEAL Team 10’s lone-survivor rescue in June 2005 by reservists from the 920th Rescue Wing, Patrick AFB, Florida. The well-known rescue was dramatized in the movie, “The Lone Survivor”. 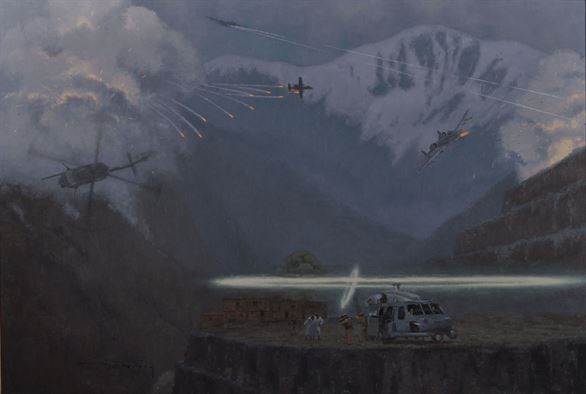 Neary’s work primarily focuses on realistic impressions of the figure, landscapes and cityscapes along with forays into military operations.

“I’m moved by the grace and beauty of the figure, patterns of light and color in a landscape or cityscape,” he said. “I find it exhilarating to explore the essence of these patterns from my observations in life to create what I want to see in my work.”

Park City’s Winter Wonderland, one of our Warren Neary paintings at Gallery MAR.

“I’m grateful for the opportunity I’ve had to see the big-picture perspective of various missions and operations in multiple roles as an active duty and Reserve public affairs officer, Reserve and civil servant historian, and artist in the Air Force Art Program,” he said. “It’s fascinating and an honor to capture and showcase our Air Force story in text and paint!”

The Air Force Association selected Neary as the recipient of the 2015 AFA National Aerospace Gill Rob Wilson Award for Arts and Letters. The award recognizes excellence in the field of arts and letters.

His paintings have created an impressive portfolio portraying Airpower heritage.