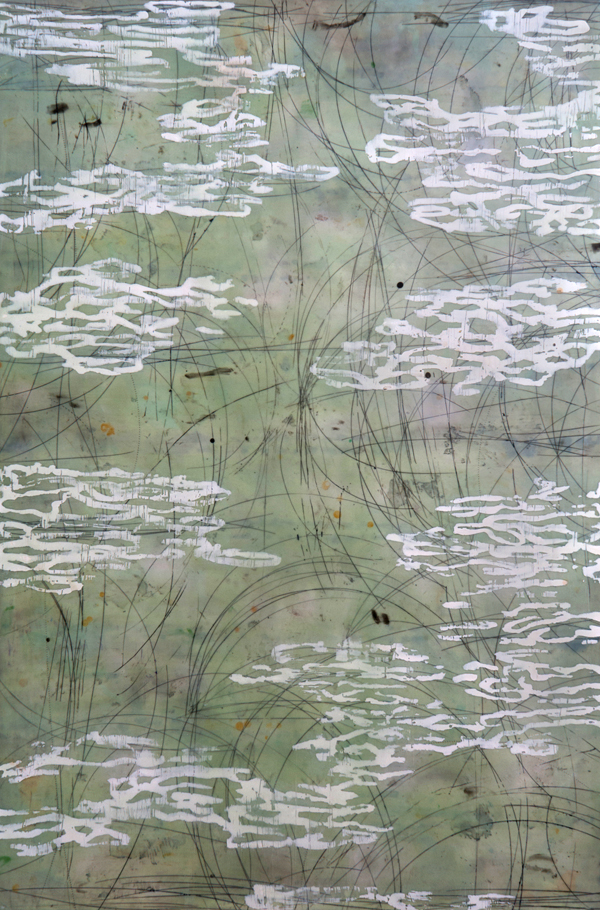 Each Wednesday, Gallery MAR artist Shawna Moore will answer an artist’s or collector’s question through her social media outreach. We are fortunate to be able to re-post her insightful answers right here on the blog.

How do you sustain enthusiasm for an idea long enough to manifest it into something physical?  (from Shannon Gleeson via Facebook)

Shawna Moore: I find that ideas are free floating fragments that come and go and return and eventually depart.  Until I capture them as a thumbnail sketch or a preliminary painting, those ideas don’t have much weight.  So in regard to making a sketch of an idea, I try to do as many sketches as I can around that idea and then variations of that idea.  For example if it a mental image of a circle in the center of the painting, I will make a big circle, a small circle, a thick circle, a thin circle a circle off center, and so on.  As I explore the relationship of the circle to the picture plane, new ideas emerge, ultimately giving me more to work with.  Single ideas can be very difficult to grasp.

In the advertising world (think Don Draper from Mad Men), they ask if an idea “has legs.”  This means does it have what it needs to sustain itself and to move forward, instead of just being static and short lived.  Stories have legs!  Think of telling a story with your paintings.  It could even be just telling the story of how the color yellow behaves.  Orange yellow, green yellow, yellow in spatial relationship to its complimentary violet, how many stories can you tell about yellow?  Let the yellow dance and be the narrator for the visual story as it unfolds.  It doesn’t have to be the perfect story of yellow or the most comprehensive.  It is just a story that you are telling, so hold that concept loosely as you explore.

Another way to hold an idea is to work in series.  Sometimes you get a really good idea and to use that idea up in a single painting is a waste!  Do variations like we discussed in the circle scenario, make more than one painting and if it is a really good idea, make a big enough painting that you capture that great idea in a big way.  From the series, you may discover your next direction, which helps to manifest the curiosity and enthusiasm you need to spend a lifetime as an artist.

At the moment, I don’t have a big idea that will get me into the painting process for today.  What I do is just show up (more about this in Creative Conversations to come).  If I get myself into the studio and just start, something always happens.  Not always brilliance, but something that I can work on for that day and the next.  Now, get into your studio and make stuff!