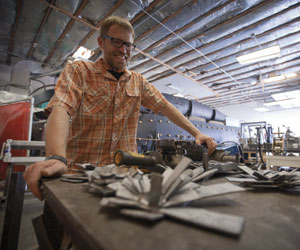 From images of divinity in bullet casings to a hubcap-inlaid buffet table,

Park City’s furniture artisans’ creative approach is anything but ordinary.

Formerly a product design consultant, Joe Norman has plied his mechanical engineering degree on a path from business to teaching to getting his hands on tools and creating art. Some of his work is functional; some is not. But almost all emits emotional resonance with a tendency to spark conversation. “The discussion is part of the art as well as the physical art,” says Norman, who has an affinity for social justice and environmental causes.

Take his Ammo Table, the surface of which is made from bullet casings and depicts an image of Jesus. Currently installed in a church, this piece has evoked a range of opposing reactions and thoughtful dialogue. Yet not all of Norman’s work has the potentially incendiary impact of guns and religion. He’s made tables out of bicycle gears and planters out of old climbing equipment (commissioned by Purple Sage restaurant). And sometimes the materials drive the art: a neighbor’s recently felled apricot tree, for example, exuded just the right namaste to suit a yoga instructor’s desk.

While Norman spends a chunk of his time in the somewhat constrained craft of building custom gates and fences, his bread-and-butter day job is balanced with art. Locally, Gallery MAR (436 Main St, 435.649.3001, gallerymar.com) displays his two-dimensional rust painting on steel canvases as well as his end tables.

It’s only fitting that an artist named Sawyer would end up in the woodworking profession. Nikos Sawyer’s custom furniture—large-scale French- and Italian-inspired dining tables, armoires, buffets, and cabinets—is sought after by local interior designers to furnish homes in and around Park City. And while he revels in the “big, Rubenesque fun” of building such gentrified pieces, Sawyer has a minimalist side, too, which he feeds by creating contemporary pieces for chic galleries such as E3 Modern in Salt Lake City.

“I love design-driven pieces,” he says, “letting the design element take over versus making everything super functional.” Some of his latest contemporary pieces are ergonomic chairs made from old whiskey barrels characterized by thin lines, and a seat made from walnut and ash inspired by an origami crane. “They are totally not comfortable,” Sawyer jokes, “but you can sit on them.”

Though he crafts most of his custom pieces in alder, Sawyer relishes the linear grain of quarter-sawn oak. He’s been known to go the reclaimed route, having recently built a bar for Uinta Brewing Co. out of old pallet wood covered in beer-keg rings and logos. He also dabbles in urban logging: when his aunt needed to chop down an aging tree in her yard, he took care of the job, milled the wood, and now has 19 beautiful walnut slabs drying in his Heber City shop, awaiting rebirth as sculpture or heirloom-quality furniture.