A Vertical Wash of Color

I just got back from a 5 day trip though Las Vegas and Brianhead with the Park City annual City Tour. City Tour is a once-a-year opportunity to travel with Park City’s leaders to a nearby town to learn about their government, culture, struggles and triumphs. And Las Vegas has a treasure trove of those! It was true sensory overload to see the City’s wide variety of public artwork and arts events.

One of my favorite stops was to the Smith Center for the Performing Arts, in downtown. No, not the strip. Actual downtown, where the City of Las Vegas reigns. The Smith Center was a labor of love by, taking 32 months to build with a $150 Million endowment. Currently, it sits on an undeveloped parcel of land called “Symphony Park.” The Broadway production of Wicked is currently showing at the Center.

The artwork in the Center is well worth a visit as well. “Fanfare for the Common Man,” a 20th-century American classical music work by American composer Aaron Copland, was selected by The Smith Center as the musical “muse” from which the artist Tim Bavington pulled his paintings. This musical composition was selected by The Smith Center, as it resonated with the message to serve the common man, or in The Smith Center’s scenario, the community. Music is the genesis of Bavington’s paintings. Through synthetic polymer paint, Bavington acts as a translator between the aural and the visual as he transforms guitar solos, melodies and bass lines into vertical bands of color.

The second piece of Bavington art (featured above) commissioned by The Smith Center, serves as a frame to the outdoor stage at Symphony Park. As you “read” the sculpture piece, left to right, the metal columns (or poles) denote musical notes, which if  “played” would sound like “Fanfare for the Common Man.” 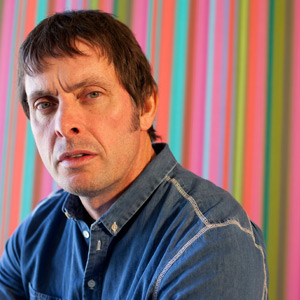 More about the Artist: Tim Bavington was born in England and received his BFA from the Art Center in California before making the permanent move to Las Vegas, where he completed his MFA at the University of Nevada, Las Vegas. His work is included in the public collections of Fredrick R. Weisman Collection; Albright-Knox Art Gallery; Creative Artists Agency; Joslyn Art Museum; Museum of Contemporary Art, San Diego; The Museum of Modern Art and a number of other art galleries and institutions.