Park City’s Kimball Art Center is bringing 20 artists and 20 corporations together for their latest “fun”raiser in Historic Park City. ABC’s Scott Wolf, a local celebrity, will emcee the evening at the Canyon’s on December 17th, the night before Gallery MAR‘s first opening exhibition of the Winter season. 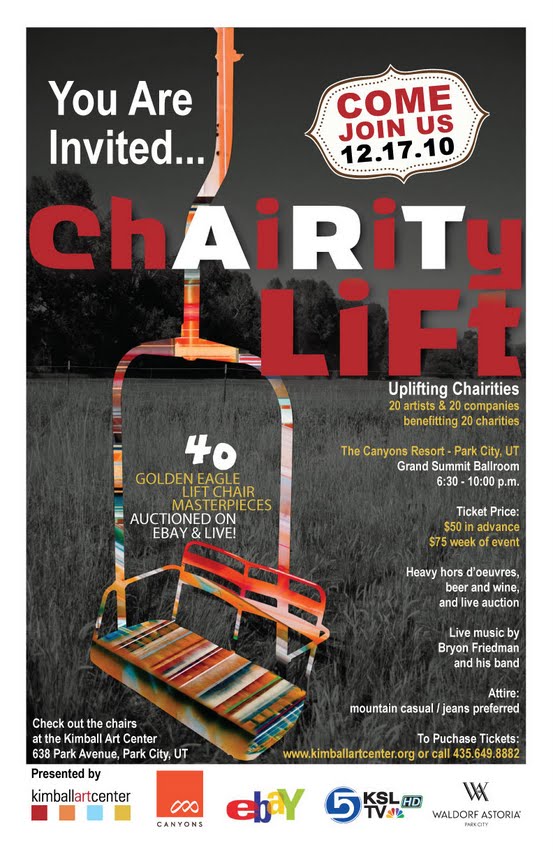 The Chairity Lift project unites 20 artists and 20 corporations (benefiting 20 charities) to design 40 chairlifts for this unique event. These chairs came from the dismantled 42 year old, historic Golden Eagle lift from Canyons. The artists and corporations created one of a kind, innovative works of art to be auctioned off on both eBay and live at the Chairity Lift event on December 17, 2010. The bulk of the proceeds from all chairlift purchases will go to Kimball Art Center to continue providing free exhibitions and education programs year-round with 25% of all proceeds back to artists and charities.

As a presenting sponsor, eBay announced it launched a 10 day online auction of these works of art. A select group of chairs were designated specifically for eBay and launched on December 6, 2010 at 8pm MST. The auction will be listed on eBay Giving Works website, the official eBay giving site and the corporate blog and will run through Wednesday, December 15, 2010 at 8pm MST. The Chairity Lift auction can be found at http://ebay.com/kimballartcenter.

“Chairity Lift is an exciting collaboration at the intersection of creativity and corporate philanthropy. Participants were given free reign to express their unique point of view to transform a chair lift into a one of a kind work of art. We’re thrilled with the results and with the help eBay, these masterpieces will reach a global audience,” Robin Marrouche, Executive Director, Kimball Art Center.

Hosted by Scott Wolf, star of ABC’s new hit show,V, the Chairity Lift event is on Friday, December, 17th in the Grand Summit Ballroom at Canyons from 6:30pm – 10pm. An evening of entertainment with music from Bryon Friedman and a live auction of Golden Eagle lift chairs while Wolf emcees the event. Tickets are available for $50, until the week of December 13th-17th when ticket prices increase to $75.

The artists including titles of their artwork for Chairity Lift are:

Ron Butkovitch -“That’s How We Roll”