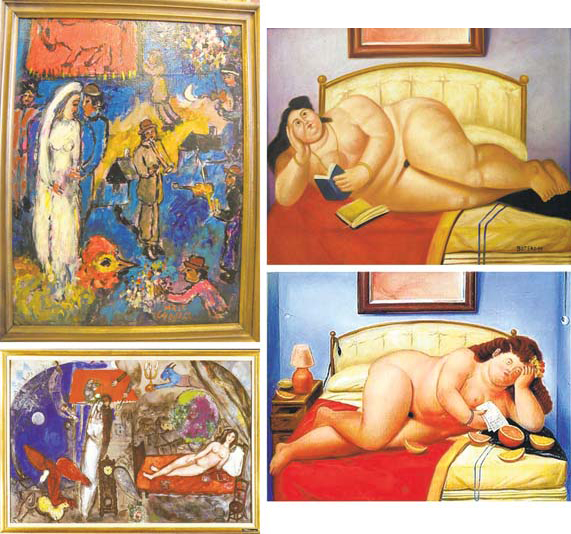 At top left, the Chagall wedding scene fake, with a real Chagall painting below it. At top right, a fake reclining nude by Botero; at bottom right, a real Botero

What do experts look when deciphering fraudulent works from the true masterpieces? I’m currently reading a new non-fiction book about one of the greatest (and most recent) art frauds out of England. Provenance follows villain John Drewe and his accomplices as they exploit the archives of the British art world to illegally legitimize hundreds of forged (by their hands) artworks. It’s a page turner, and would make a wonderful holiday gift for any art lover.

Then, tonight, I notice a new headline in the art world– more fakes out of Portugal! Digging into this Mutual Art Article it appears to be a very strange case in the art forgery world. Typically, a forger specializes in one area of artwork: impressionism, cubism, etc. But the new “collection” is a jumble, an odd variety of styles. Police seized more than 130 paintings that were claimed to have been painted by Modigliani, Matisse and Monet among other noted artists. Other 20th-century masters in the hoard include Chagall and Kandinsky. Even a Leonardo da Vinci is among the fakes… now that’s confidence in your forgery abilities! A Norwegian couple is suspected of being involved with the forgery, discovered in a raid in Cascais, Portugal (near Lisbon).

The director of the Glasgow Museums and Art Galleries said, “It might be the work of more than one forger. I doubt if any would have fooled a specialist. They are potpourries of familiar elements in an artist’s work, not attempts to create an original, unknown conception… much more difficult.”

Also in the article,  John Myatt, a British artist who was sentenced to a year in prison in 1999 as a forger of Monet, Matisse and Giacometti, described a Portuguese Modigliani as “quite convincing”—”I’d have gone for that,” he said. He also thought the Botero looked “quite credible.” But he dismissed a Chagall as missing “the essence” of the artist—”he wasn’t that untidy,” he said—and a Leonardo as a “pastiche of an 18th century painting”. He observed that it was foolhardy to forge Leonardo: “There has been an accepted body of his work with provenance and exhibition history over 400 years. To come along with a new Leonardo is just stupid… A new Kandinsky at least makes some sense.”