Artworks by Van Gogh, Picasso, Cezanne and other elite artists were seized this week in a crackdown on assets hidden by the founder of the now-collapsed dairy company Parmalat. There are an estimated 19 masterpieces hidden away in attics and basements, with a value totaling nearly $150 million. It seems Calisto Tanzi hid the masterpieces in attics and basements in an attempt to conceal them from his bankruptcy. Among the found works is a ballerina portrait by Degas, two Van Goghs, a Cezanne, and a Picasso.

Bankruptcy fraud aside, what a shame to hide away these artworks! The loot was discovered through a wire-tapping operation. Officials believe that at least one the paintings was about to be sold. The negotiation of that sale overheard, and a subsequent raid of three apartments uncovered the tip of this art-cache iceberg. 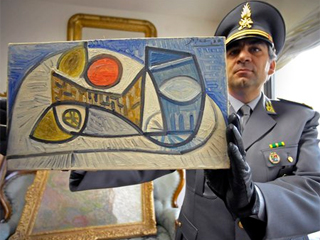 Calisto Tanzi was convicted by a Milan court, last year, of rigging the market and is now on trial for alleged fraudulent bankruptcy. For years, it has been rumored that he has a stashed treasure trove of fine artworks, a rumor that Tanzi repeatedly denied.

From the AP: “Parmalat, the dairy conglomerate known for its long shelf-life milk grew from a small dairy distributor in Parma, into a diversified, multinational food company by 1990, but collapsed in 2003 under euro14 billion in debt — eight times what it had previously acknowledged — in what remains Europe’s largest corporate bankruptcy. Many small investors who lost their life savings were among some 40,000 defrauded bondholders.”