Lance Armstrong has often partnered with Trek Bikes. Since 2002, Armstrong has more or less ridden their “Project One” painted bikes. And as soon as he announced that he was returning to professional cycling, Trek’s creative group started working on custom bikes for the celebrated racer.  As always, it was important for Armstrong’s  LIVESTRONG Global Cancer Campaign to be linked to his bikes. And what about a way to raise funds for cancer research at the same time? The result is contemporary artists working with Trek in an effort to raise awareness and generate funds to benefit LIVESTRONG. Creativity and sport unite!

Trek provided each selected artist with consultation to describe fabrication possibilities based on Trek’s custom-formulated coatings. These are top artists who very rarely take instruction or advice about their work. The artists were briefed on bike paint and airbrush techniques as well as masking and decal options in order to pick the methods they would use for their design. Each Bicycle was uniquely handled per the artist’s instruction. Some frames were decorated with paint alone, while others required extensive decal work.  Lance Armstrong may make at least $4 million for charity by selling the bikes he competed with at the Tour de France.

The Hirst racing bicycle may fetch more than $1 million alone when it is sold with five others at Sotheby’s New York this October. All six of the “art” bikes made by Trek Bicycle Corp. will be auctioned by Sotheby’s at the Park Avenue Armory, New York, on Oct. 2nd, the anniversary of Armstrong’s cancer diagnosis. All the proceeds of the sale will benefit LIVESTRONG. 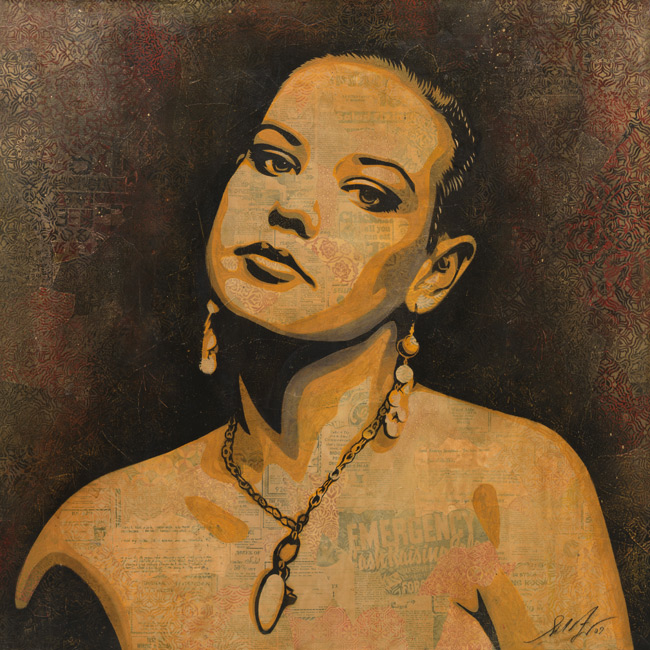 In addition, Lance Armstrong and Nike took the collaboration one step further, with the launch of STAGES, a global art exhibition which will raise funds to fight cancer. With STAGES, over twenty world-renowned artists have donated their time and creativity. Their mission was to express the LIVESTRONG message through their artworks. This show will unite the art world, philanthropy, and sport. The participating artists are Cai Guo-Qiang, Rosson Crow, Jules De Balincourt, Dzine, Shepard Fairey, Andreas Gursky, KAWS, Geoff McFetridge, Yoshitomo Nara, Catherine Opie, José Parlá, Raymond Pettibon, Lari Pittman, Richard Prince, Ed Ruscha, Tom Sachs, Kenny Scharf, Eric White, Christopher Wool, and Aaron Young. The exhibition opened at the Emmanuel Perrotin gallery in Paris last week and will be on view through August 8th. Here are some photos of the show.