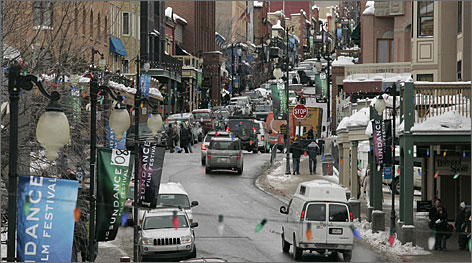 Second homes: Park City is Just a Hop, Skip and a Ski Slope Away [excerpted below]

With ski towns, getting there is rarely half the fun. Many, like Aspen and Telluride, are hours from a major airport. Moreover, small mountain-town airports operate at the whims of nature.

But the ski resorts surrounding Salt Lake City are the most accessible in North America, a city-bus ride away from a major hub airport that rarely closes. Three of the biggest Utah resorts can be found in one place: historic Park City.

“We moved here 28 years ago from Laguna Beach,” says Ann MacQuoid of Chin MacQuoid Fleming Harris, Utah’s top Prudential real estate agent for many years. “We came then for the same reasons people come here now: We were skiers who went to Colorado or Tahoe but found we could get on a plane in Orange County and be here 2½ hours later. This is what has made Park City so popular. That, combined with the really successful Winter Olympic Games in 2002, started a huge upward curve in second-home sales.”

Many Olympic facilities are still widely used, and visitors can bobsled, luge, speed skate and even try their hand at ski jumping and biathlon. Cross-country skiing abounds; in summer, biking and hiking are hugely popular, as is fly fishing, golf and boating on Jordanelle Reservoir.

But by far the main draw is a trio of world-class ski resorts: Deer Valley, Park City Mountain Resort and The Canyons.

Park City began as a thriving silver mining town in 1869, and though the full-time population has shrunk to about 7,400, the town issues more than 1.3 million daily lift tickets every winter. The other huge draw is the annual Sundance Film Festival.

The very walkable downtown, known as Old Town, is on the National Historic Register and filled with restaurants, shops and galleries [like Gallery MAR at 580 Main].

This combination of small-town charm, ample dining and shopping choices and especially convenience have made Park City somewhat unique: Essentially a suburb of Salt Lake City, it has attracted significant numbers of residents who live the mountain lifestyle and commute into the city for work, the opposite of nearly every other ski town.