My Notes from The Rape of Europa by Lynn Nicholas, Part 1, “Germany Before the War/The Nazi Art Purges”

I first read The Rape of Europa four years ago. It was almost too much to comprehend — it left me numb. Recently, I reread the book and decided to condense parts that I wanted to remember in detail. It’s difficult reading and even more challenging to keep the people, dates and sheer volume organized. Here are some of my notes that I hope will give you pause. Get ready for a disturbing, yet fascinating, trek through art history.

The author, Lynn Nicholas, was educated in the United States, England and Spain, and received her B.A. from Oxford University. She worked for several years in the National Gallery of Art in Washington, D.C.  While living in Belgium in the early 1980s, she initiated what would become 10 years of research for “Rape of Europa.” She was later elected to the Légion d’Honneur by the government of France.

Adolf Hitler’s evil designs had art at the foundation. It was a cultural revolution that began in earnest in 1933 when he became the Chancellor of Germany, but  his perverse vision of the perfect race and perfect cities through approved art, music, literature and architecture began years earlier.  WWII was the means to that end. The Rape of Europa is the most comprehensive account of what led up to the great art purge, theft and destruction of countless collections, many of which are still missing and thousands that were never reinstated to rightful owners. Many of the evil-doers are named, but only some of the unsung heroes who risked their lives for art are listed, and their stories will bring you to tears. 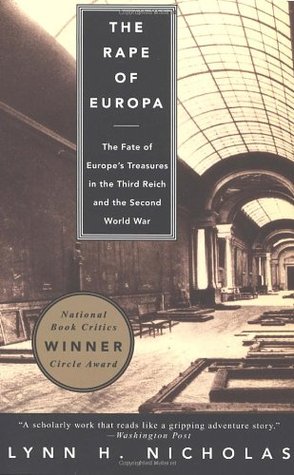 “Never had works of art been so important to a political movement and never had they been moved about on such a vast scale, pawns in the cynical and desperate games of ideology, greed and survival.” Lynn Nicholas, The Rape of Europa, published 1994.

On June 30, 1939, an auction took place in Lucerne, Switzerland. It was widely advertised. Germany had purged its museums of what the government called ‘degenerate art’ including works by Picasso, Matisse, Chagall, Gaugin, Van Gogh and many others. This collection was to raise money for acquiring approved art. The Germans insisted the profits would go back to German museums. The French did not attend on principle and the Americans bid low. The MoMA purchased (through a secondary agent) five paintings that remain in their collection today.

Theodor Fischer, auctioneer at Fischer Gallery in Lucerne for the first auction/sale of purged collections from German museums June 30, 1939. This is George Braque’s “Still Life.” In 1946, the U.S. Office of Strategic Services Art Looting Intelligence Unit (ALIU) described him as “the focal point in all looted art transactions in Switzerland, and recipient of the greatest number of looted paintings located to date.”

The auctioneer, M. Theodor Fischer, could not hide his disdain for this degenerate art. “Nobody wants that sort of thing,” and smiled when he said, “withdrawn.” Profits fell short.  500,000 Swiss francs were converted to pounds sterling and deposited in German controlled accounts in London (my search for historical currency exchange rates led me to very roughly estimate the sales in dollars was USD $156,250). The German museums did not receive a penny. This auction represented the most civilized purge… what came next was unimaginable.  American newspapers and journals were among those around the world who refused to publish a word about what was taking place with regards to the theft from museums, galleries and eventually private homes and estates of the ‘unworthy’. 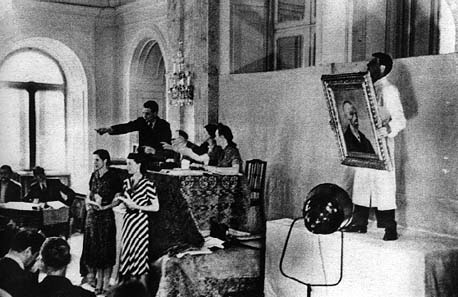 Van Gogh’s “Self Portrait Dedicated to Gaugin” was auctioned at Lucerne on June 30, 1939.

“With hindsight, the gradual progress toward this shameless event is clear to see. In the world of art, as elsewhere, the Nazis simply took existing prejudices and attitudes to incredible extremes. Few could believe or wanted to acknowledge what was taking place before their very eyes.”  –Lynn Nicholas.

The purging of ‘degenerate art’ had begun years before Hitler became Chancellor in 1933. The Bauhaus, which had opened in 1919, as a progressive school of design and architecture, was targeted as early as 1925 when nearly everyone was fired. In 1929, all murals were painted over and every trace of the Bauhaus movement was eliminated.

In 1933, a new government entity was created to regulate everyone connected with the arts, and it was headed by Joseph Goebbels. Membership was required of all artists, writers, musicians, art dealers and architects. If you did not join, you could not work, sell or exhibit — you could not even produce work. Gestapo agents made unexpected visits to nonmember artists, and if they found the smell of turpentine or wet brushes, you were arrested and imprisoned. If you were Jewish or Communist or non-conformist, you could not join. Goebbels even forbade all art criticism.

In 1936, Hitler’s Temple of Art (Haus der Deutschen Kunst), in Munich, was completed to showcase ‘approved art’.  Its debut in July 1937 called Three Days of German Art began with a grand parade followed by a seething rage-of-a-speech by Hitler which frightened even his entourage. He swore to exterminate “the last elements which have displaced our Art.” 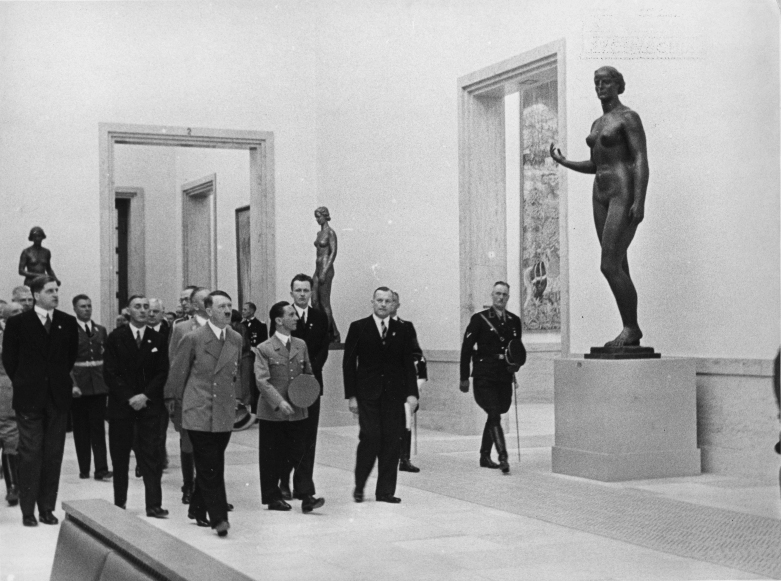 The stunned crowds entered the Temple and were greeted by idealized German peasant families, commercial art nudes and heroic war scenes. The Fuhrer was portrayed as a mounted knight clad in silver armor and carrying a fluttering flag. The show was a flop and attendance was low.

Long lines to enter The Degenerate Art Show in Munich, July-November, 1937 and was the most popular art show in Germany to date.

On the third day, the “Degenerate Art Show” opened in a run-down building where hundreds of works purged from German museums representing 113 artists were jammed in. The catalogue was badly printed and laced with vicious quotes from Hitler’s speeches on art. The walls were covered with mocking graffiti, and many paintings were hung askew. 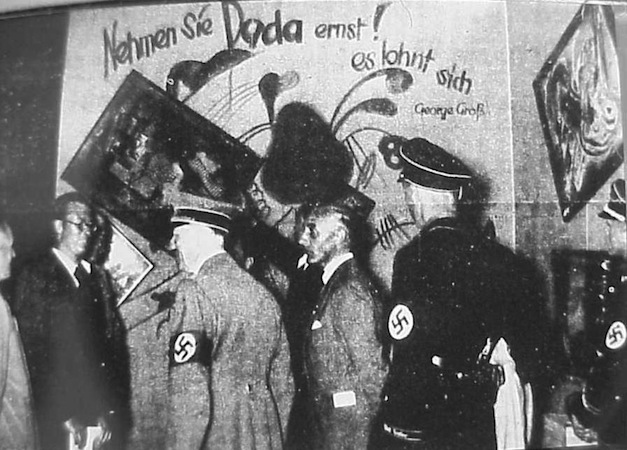 The Degenerate Art Show of 1937 was supposed to turn-off Germans to the modern art Hitler despised. It was installed with disparaging graffiti in an old building. Instead, 2 million people attended, and it was the most successful art show in Germany to date.

In March 1938 the museums were declared purified. That June, Hitler declared the government free from all claims for confiscated or destroyed art. This opened the flood-gates to unrestrained commerce of purged work. A committee appointed four art dealers to “make money from the garbage.” On March 20, 1939 there were over 5,000 pieces of degenerate art unsold. Frantic to carry out the Fuhrer’s purification policies, Goebbel ordered them burned: 1004 paintings and sculpture and 3,825 drawings, watercolors and graphics.  One of the dealers was Hildebrand Gurlitt, whose son, Cornelius, would make headlines in 2011 when German police raided his apartment in Schwabing and uncovered more than 1,500 pieces of ‘purged art’ his father apparently never burned or ‘collected’ later on.

To art professionals outside Germany, the advent of Nazism and the bizarre goings-on of its art establishment were regarded as a passing phenomenon requiring minor adjustments.

Read more in my next installment, “Period of Adjustment: The Nazi Collectors Organize, Austria Provides and Europe Hides.”

We must never forget. Written by Eileen Treasure, Manager