“Setting an intention to create change and to find deeper understanding is how I will broaden my awareness of the contribution of black women artists and how I believe eventually we can initiate the changes we wish to see in the world.” – S. Moore

This last week, many of us decided to take a pause on social media and allow black voices to be amplified with #amplifymelanatedvoices. One of our artists Shawna Moore took it a step further and actively shared some of her favorite female black artists. We wanted to post them here as well; if you’re unfamiliar with the artist below, please enjoy the introduction!

From Shawna Moore: I realized about 15 years ago that when I would talk about art I would automatically use male artists as references. As I began to realize my position as a woman artist I became aware of how even I didn’t know or recognize my true peers, woman artists. I did some quick research and began paying more attention and using female artists as my reference to change the narrative of who is an art maker — at least in my own mind. [For these recent Instagram posts], I was hoping to contribute to the cause of Black Lives Matter by sharing my interest in art made by BIPOC WOMEN ARTISTS, not just the men featured in art history books mostly written by men. I first went to my favorite artists who happen to be black women and then as the days went on, I dug a little deeper. Setting an intention to create change and to find deeper understanding is how I will broaden my awareness of the contribution of black women artists and how I believe eventually we can initiate the changes we wish to see in the world.

Kara Elizabeth Walker and Julie Mehretu are two of my favorite contemporary artists, and I was so pleased to see them both included in Moore’s posts. Walker’s art was first introduced to me in a show at the Kimball Art Center, right here in Park City. You cannot look away. And I had the pleasure of assisting Mehretu at the Headland’s Center for the Arts during her 2003 residency. And by assist, I mean sat in awe with her work — and occasionally drove her into San Francisco. I hope that you have your own moment of awe and respect as you learn more about these artists. 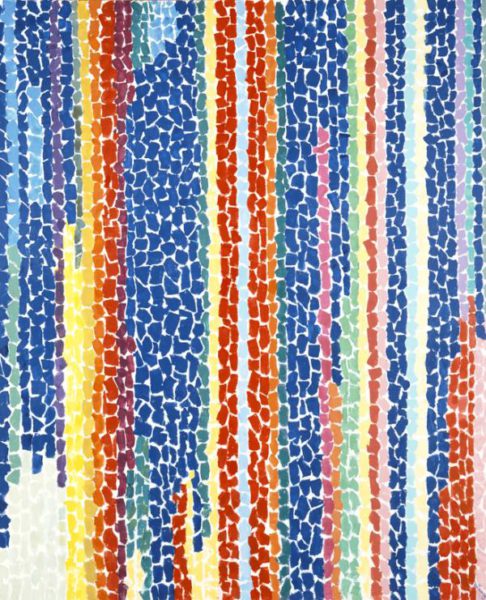 Alma Woodsey Thomas, Iris, Tulips, Jonquils, and Crocuses, 1969; Gift of Wallace and Wilhelmina Holladay to the National Museum of Women in the Arts.

ALMA WOODSEY THOMAS, born 1891, in Columbus Georgia and died 1978, was an African-American Expressionist painter and art educator best known for her colorful abstract paintings. She lived and worked primarily in Washington, D.C. and The Washington Post described her as a force in the Washington Color School. During the ’60s, Thomas emerged as an exuberant colorist, abstracting shapes and patterns from the trees and flowers around her. Her new palette and technique—considerably lighter and looser than in her earlier representational works and dark abstractions—reflected her long study of color theory and the watercolor medium. 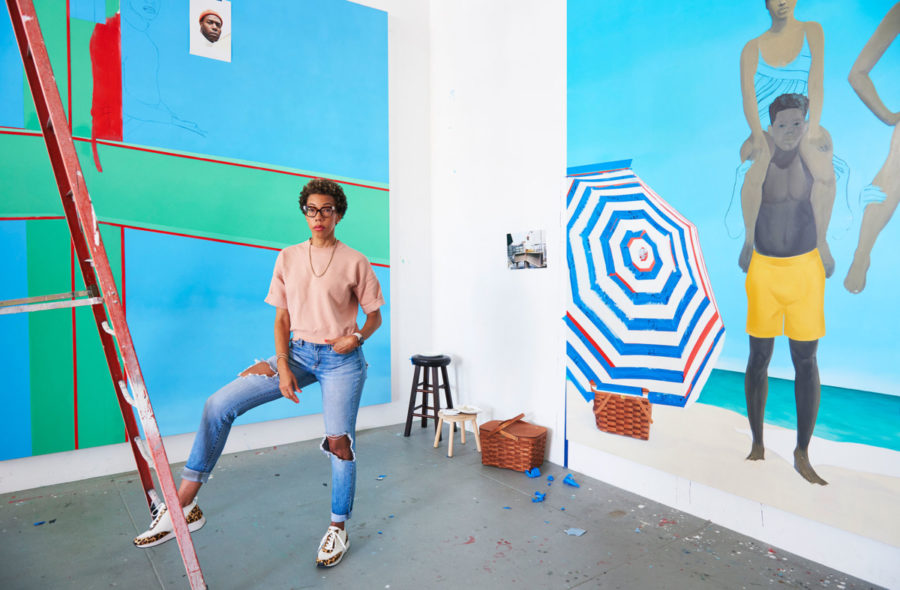 Amy Sherald in her studio, with works in progress

AMY SHERAD, born 1973 in Columbus, Georgia is an American painter based in Baltimore, Maryland. She is best known for her portrait paintings. Her choices of subjects look to enlarge the genre of American art historical realism by telling African-American stories within their own tradition. From Shawna Moore: This is one of my favorite Amy Sherad paintings (in progress: Sometimes a King is Really a Queen). From Cultured Mag: There has been a waiting list since 2015 for Amy Sherald’s realist paintings of African Americans, at once dreamy and assertive in their gaze and posture. Yet the 46-year-old artist went from being known by art world insiders to being known by sixth graders after her portrait of Michelle Obama, commissioned for the National Portrait Gallery in Washington D.C., was revealed last year to both acclaim and debate. 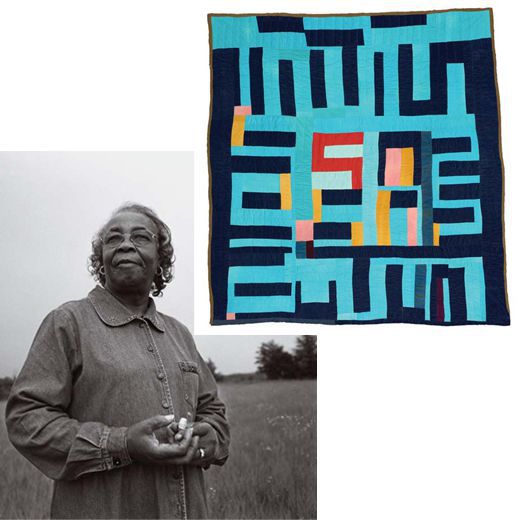 GEE’S BEND QUITLMAKERS The women of Gee’s Bend—a small, remote, black community in Alabama—have created hundreds of quilt masterpieces dating from the early twentieth century to the present. Resembling an inland island, Gee’s Bend is surrounded on three sides by the Alabama River. The seven hundred or so inhabitants of this small, rural community are mostly descendants of slaves, and for generations they worked the fields belonging to the local Pettway plantation. Quilt-makers there have produced countless patchwork masterpieces beginning as far back as the mid-nineteenth century, with the oldest existing examples dating from the 1920s. Enlivened by a visual imagination that extends the expressive boundaries of the quilt genre, these astounding creations constitute a crucial chapter in the history of African American art. 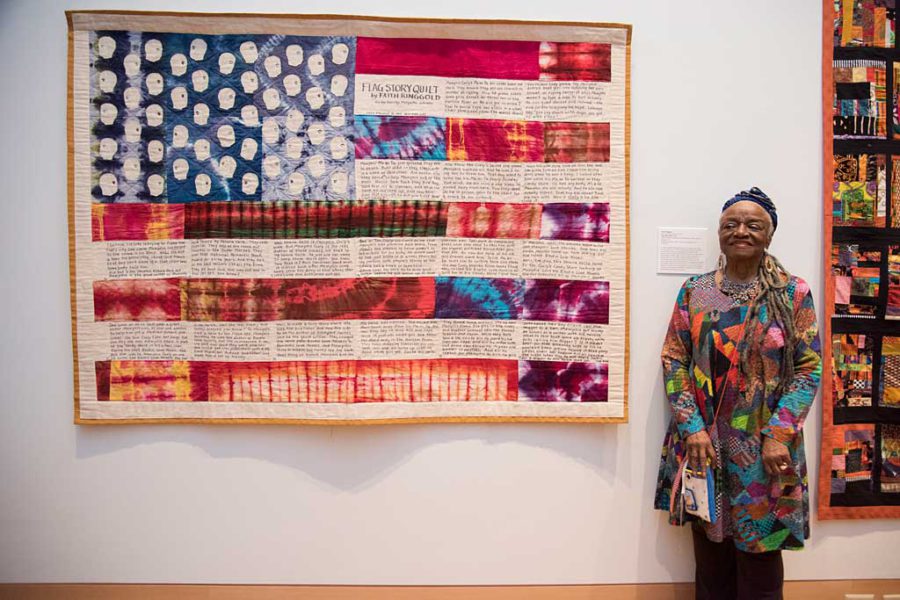 FAITH RINGGOLD, born 1930 in Harlem, New York, is a painter, mixed media sculptor, performance artist, writer, teacher and lecturer. She received her B.S. and M.A. degrees in visual art from the City College of New York in 1955 and 1959. Professor Emeritus of Art at the University of California in San Diego, Ringgold has received 23 Honorary Doctorates. During the early 1960’s Ringgold traveled in Europe. She created her first political paintings, The American People Series from 1963 to 1967 and had her first and second one-person exhibitions at the Spectrum Gallery in New York. She is the illustrator of 17 children’s books. 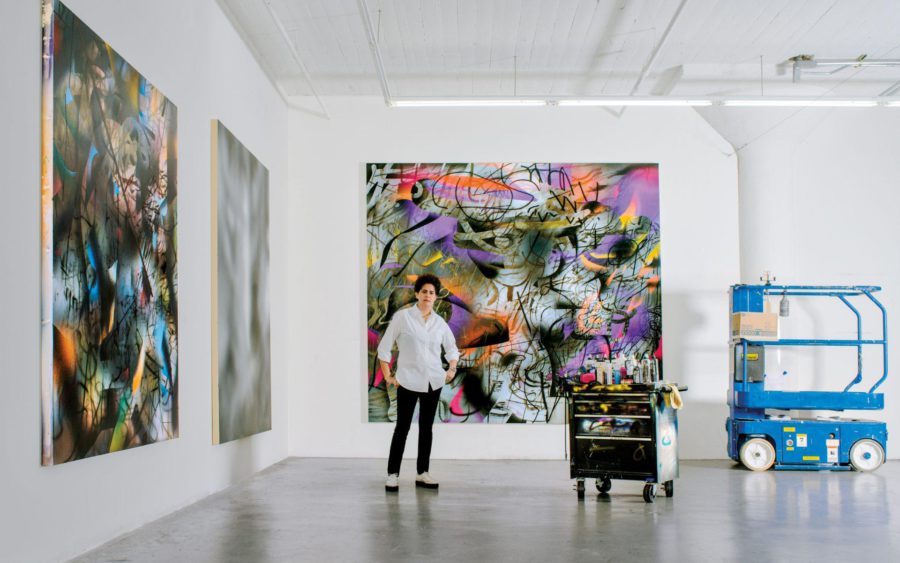 JULIE MEHRETU,  Julie Mehretu (born 1970 in Addis Ababa, Ethiopia) is an artist, best known for her densely layered abstract paintings and prints. She is best known for her large-scale paintings that take the abstract energy, topography, and sensibility of global urban landscapes as a source of inspiration. From Shawna Moore:Shout out to a favorite woman artist. Hey work is beautiful, soulful, usually huge and visionary. Respect JM. From Galerie Magazine: Mehretu’s foundational imagery, whether it’s maps and buildings or photos of current events, has always referenced complex and sometimes ugly histories. Her celebrated 23-by-80-foot Mural (2009), created for the lobby of the Goldman Sachs building in Lower Manhattan, is a tour de force history of not only capitalism and finance but also, implicitly, its excesses. Her 2017 commission for the lobby of the expanded San Francisco Museum of Modern Art—a pair of 27-by-32-foot paintings titled Howl, Eon (I, II) (2017)—combines 19th-century Hudson River School landscapes with images of crowds protesting police brutality in Baltimore and Ferguson, Missouri. But her recent works are her most overtly political and humanist. “Where these paintings are coming from, they’re difficult content-wise,” says Mehretu. “But they have, I think, aspects of open possibility.”

KARA ELIZABETH WALKER, (born November 26, 1969) is an American contemporary painter, silhouettist, print-maker, installation artist, and film-maker who explores race, gender, sexuality, violence, and identity in her work. Her vignettes of slavery and plantation life in the antebellum American South are often life-size and span entire walls. In 1997, at age 28, Walker became one of the youngest-ever recipients to receive a MacArthur Fellowship. In 2002, she was the United States representative to the Bienal de São Paulo, and in 2012, she was elected to the American Academy of Arts and Letters. Her work has been collected and exhibited by museums worldwide.