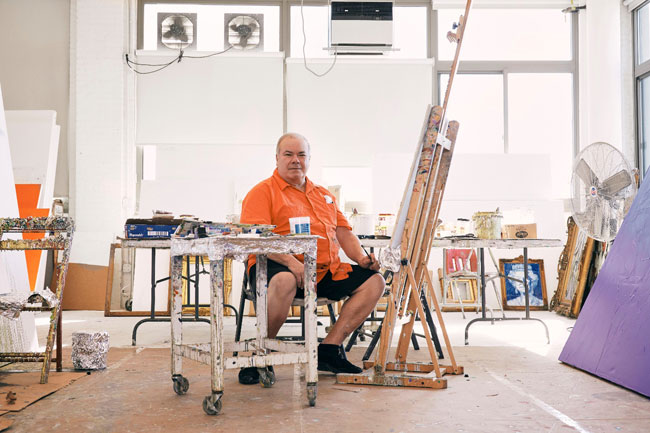 “I need to paint. It’s not a complete world for me, even if I’m doing installations or sculpture. There’s something about you and the canvas and the paintbrush and the colors. It’s very alone and it’s very internal and it’s very without words. It’s more than meditative. It’s a completion. It’s something I need desperately to feel worthwhile.” Photo: Brandon Schulman

During my visit to Hunt Slonem’s Brooklyn studio on a chilly spring day, I felt like Dorothy opening the door from a sepia-toned, tornado-ravaged Kansas to a color-saturated Oz.  The place is teeming with LIFE and not just on account of the vibrant paint hues.  From the rendered fauna on the walls, to the lush flora at one end of the massive space, to the squawking, singing multitude of bright-plumed parrots on the opposite end, the overwhelming feeling is one of otherworldly enchantment.  And then there’s the conversation.  A tête-a-tête with the prolific artist conjures up some indelible imagery including the sight of shimmering hummingbird migrations in the Caribbean and the spectacle of multitudes crawling on their knees during a religious procession through the corn fields of Mexico.  “I like the word exotica,” explains the painter, sculptor and printmaker. 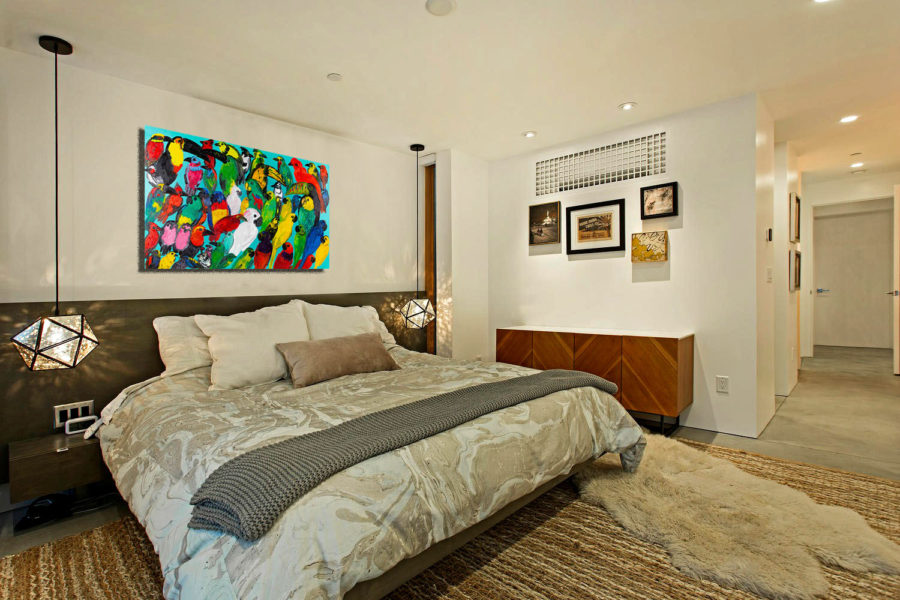 What is it about animals that inspires you?

It’s not just animals.  It’s nature in general and the Garden of Eden and the symbolic reference of the butterfly and metamorphosis and ascension.  I don’t think there’s anything more inspiring than nature as a source of subject matter.

Everything about it has captivated me:  the intrinsic forms, the colors, the behavioral tendencies, the spiritual symbolism, the environments in which they were created after 60 million years of evolution like in the rainforest that is sadly disappearing before us – all these myriad forms and shapes.  Humans are mostly similar, but animals are so varied.  And we’ve lost so many even in our lifetime.  We’re just nearing the end of the line on so much. 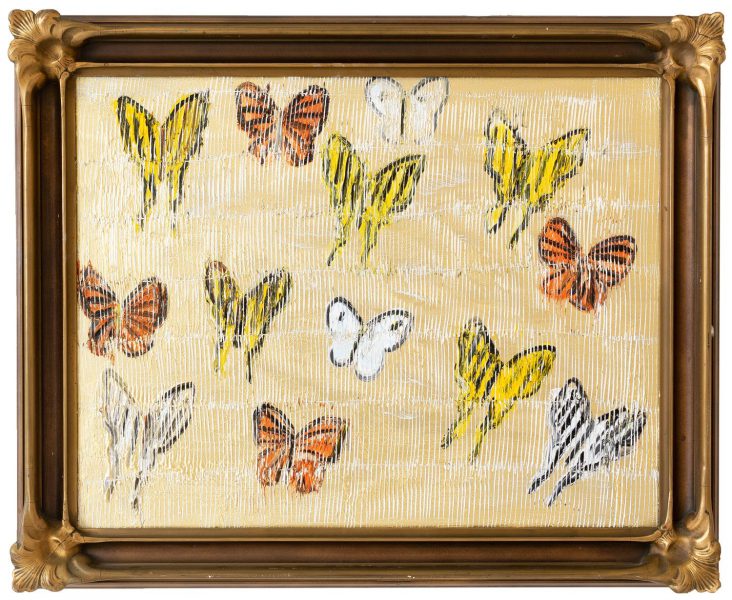 There’s a spiritual component too, no?

In the Hindu religion, animals are considered a gift from other realms.  They’re not of the earth particularly.  Orchids and birds are supposed to be from the fifth realm.  So, there’s a spiritual thing that surrounds the evolution of nature and birds in particular.  The Hoopoes [colorful birds found across Afro-Eurasia] are considered the messengers of God.  I’ve had experiences in my life like seeing five million hummingbirds hovering at an aloe plantation in Dominica.  They’re all iridescent and they’re all different.  I don’t get those thrills in our man-made world so often.

When I saw my first morpho butterfly in Nicaragua, when I was an exchange student in 1968, I almost passed out.  It was the most exciting thing I’d ever seen.  I paint them continuously and always have.  They’re an iridescent blue.  They only exist in Latin America.  Some people like animation, some people like superheroes.  I like nature.  I love fish, I love turtles.  I have a whole bunch of Star of India tortoises here that are doing very well with me.  I live with 60 birds, mostly parrots because they live a long time.

Yes, I’ve owned and cared for and observed and painted huge numbers of bird forms in my life.  I had a 40-foot aviary in my first loft in New York, so I’ve watched them flying back and forth – thus came about my crosshatch technique where I took the back of the brush one day and decided to become more modern. Most birds live to 20 years if you’re lucky, but parrots can live to 100 years or thereabouts, so it’s a longer term relationship. It’s so disheartening with dogs and cats – they have such short lifespans compared to ours. But birds can outlive us if they’re well cared for.

Tell me about the rabbit which has become an iconic image for you.

It just happened.  It’s like calligraphy for me.  I was born in 1951 under the sign of the rabbit.  But I didn’t find this out until the 90s late at night in a Chinese restaurant.  I was pleased because the rabbit is a nice sign.  It has all these good things associated with it – luck, productivity.

When did you know you wanted to become an artist?

I never didn’t want to become an artist.  I don’t know why.  My grandfather painted a little bit and he would send us paintings and he would send me cocoons of grey moths.  Where he found them, I will never know.  But I would come home from school and there would be a luna moth on my shoe or a polyphemus moth.  They’re big moths that almost don’t exist in nature anymore.

What a miracle!  What a wonderful childhood gift!  My grandfather really influenced my life.  Not a day goes by when I don’t paint a luna moth.

So there was this magic and art element.  It just put me in another realm to escape from reality.  My father was a career naval officer and made submarines and missiles.  I wasn’t as fascinated with that [laughter], and I was always escaping into these other realms.  When I was in first grade, when they asked us what we wanted to do, I drew a picture of myself standing next to an easel, painting.  I never assumed I wouldn’t be an artist.  But I didn’t know how hard it would be.  You just think it unfolds and it does, but not without great challenges and perseverance.

My father worked with the British navy and was always traveling. He would come back from Asia and the Philippines with all these stories. It wasn’t a boring life. We traveled a lot and we lived in naval quarters. We lived in Washington State where I had greenhouses and grew orchids. Some of these houses had 10 full-time gardeners.

Which place that you’ve traveled to has inspired you the most?

No single place has inspired me the most.  I lived in New York the longest.  I moved here right after I graduated school in Louisiana.  I was an exchange student in Central America in high school and I used to play hooky, running around in the jungles, looking at butterflies and birds and whatnot.  Hawaii was a big influence on me.  So was Tahiti and Japan.  I went to Japan in 1961.  I’ll never forget.  I opened the door of the Imperial Hotel in Tokyo and I saw this band and this elegant woman singing jazz and I thought it was the most sophisticated thing I’d ever seen in my life.  Years later I found out it was Anita O’Day.

I bring a color back from wherever I go.  I’ve been to India many times during monsoon season and I did a monsoon series.  I did a series that is red from trips to Madrid, I did a whole huge white series that I call pichul from my travels to Norway and Sweden.

Everywhere I go influences me in terms of a new color idea or some twist of format.  In the Philippines, I visited Antonio de Dios, owner of the largest private bird collection in the world.  And I also met this guy there who lived in a treehouse with lions and tigers.  He has since passed away.  I’ve seen so many interesting and exotic things.  It’s the colorful, unusual, spiritual, hidden stuff that I crave be it animal, mineral or vegetable.

I went to the exact equator in Ecuador and saw the ancient ruins there.  When I was young, I went to school in Mexico near the Great Pyramid of Cholula, the largest pyramid in the world.  They had excavated that site and we would go in and fall into these huge holes.  I’ll never forget waking up in Cholula and seeing what seemed like a million people crawling on their knees in a religious procession through the corn fields. 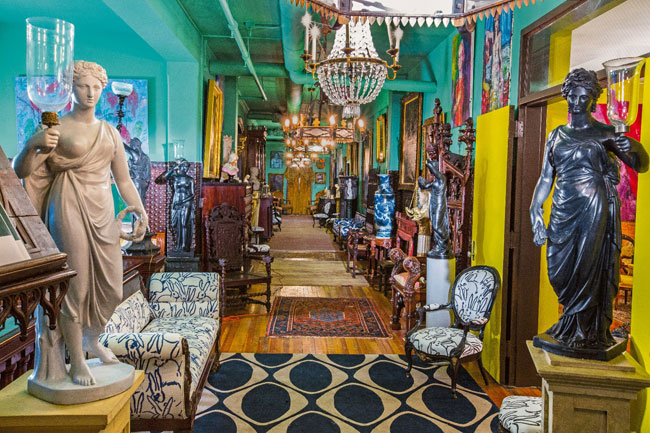 Tell me about your house collection.

I have seven historic homes – three plantations [Madewood, Albania and Lakeside all in Louisiana], three mansions [Cordt’s and Belle Terre in New York and Woolworth in Pennsylvania] and an armory [the Scranton Armory in Scranton, PA].

That’s a lot of real estate.  How do you maintain all that?!

I don’t even know how I’m able to do it.  I pray a lot.  I’ve been really fortunate to have wonderful caretakers and friends and helpers.

What compels you to own these homes?

I studied Madewood in college.  I took Louisiana architecture and went there 45 years ago for the first time.  For the last 30 years, I don’t know why, but I just wanted that house.  Somebody called me and said that they were going to sell it.  Somehow it worked out.  I really didn’t know if it would or could, but I asked my psychic of 30 years and she said “Will you leave me alone!  You’re getting it!”  I said “How’s that going to happen?”  “I don’t know,” she said, “but it’s happening!  Quit asking me!”

What about the other six?

Each one is a story like that.  My first is Cordt’s Mansion in Kingston, New York which I bought right before 9/11.  It’s really about the collections and the time travel and the history of the places.

Do you feel transported to a different place and time?

I don’t feel transported but I feel like there’s a time shift thing going on, particularly with the Armory because it’s so huge.  My tools are color and volume.  The amount that I collect is kind of cuckoo.  I love saving things and bringing them in to another 100 years of usage.

There seems to be a dichotomy between decay and re-birth in your work and collections.

I prefer the word patina.  What if the Sphinx looked like it was made yesterday?  They restored the Sistine Chapel and I really don’t care for it.  I like restoration unless it destroys things.  Alice Neel, the painter, once said “All experience is good.  If it kills you, you’ve gone too far.”  I like the history and the age of things – most of my houses are from 1830 or so.  I like to leave rooms that haven’t been painted for 100 years sometimes and work with fabric and furniture, color and paintings.  I hate to destroy the evidence of age.  The English don’t over-restore things.  We don’t have a good sense of that in this country.What are your favorite types of projects?

I love doing projects with hospitals and public places – just really healing and upliftment through the works.  I did Playscape at the Children’s Museum of Indianapolis.  They used 110 of my paintings. 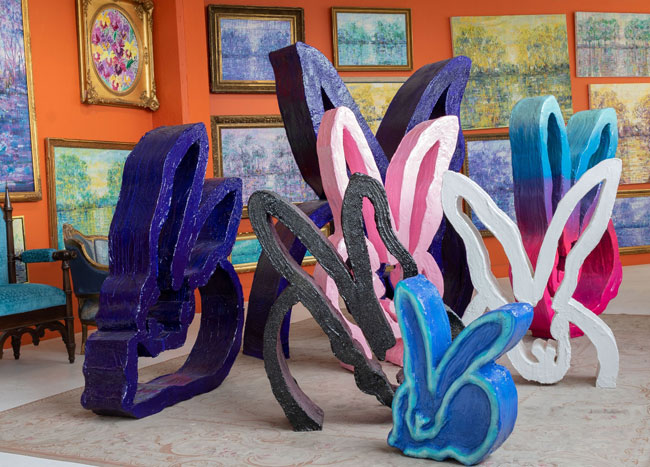 What kind of new things are you working on?

Glass, lightboxes, prints, bronze sculptures, plaster … a lot of sculpture work.  I just did a 22-foot butterfly sculpture for a sculpture park in Louisiana.  I have a big toucan sculpture in Louisiana.  And I love doing huge murals.  I did an 80-foot mural at the World Trade Center.  I did the Bryant Park Grill.  I love working on a very huge scale like 80 to 100 feet.  That’s my thrill in life.  But painting is what I do.  I’m never going to stop.  I have commitments to all these long-lived creatures and these houses and my paintings have taken me all over the universe and it’s very exciting.

Do you believe that things happen for a reason?

I believe in pre-destiny.  I believe in mission.  I could have died 12 years ago, but I didn’t.  I had a seizure because of a medication that I was put on.  I had to learn to walk all over again.  Anyway, I got through that and I chose to come back. I have a lot to do!