A Flag For All – R. Nelson Parrish 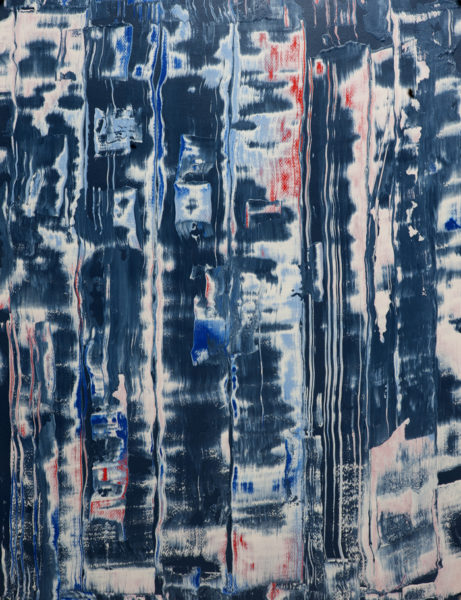 Open now at Gallery MAR is a new exhibition featuring R. Nelson Parrish. IMAGES Arizona Magazine coincidentally just reported on the Santa Barbara-based artist, and we are re-posting their piece with permission below.

The art of R. Nelson Parrish might appear as varied as his background and diverse interests.

Parrish is a painter, sculptor, muralist and photographer. He is drawn to adventure sports as a means to push the body and mind to further limits. He has traveled around the world. He has worked at a roller rink, in digital marketing and on Capitol Hill. 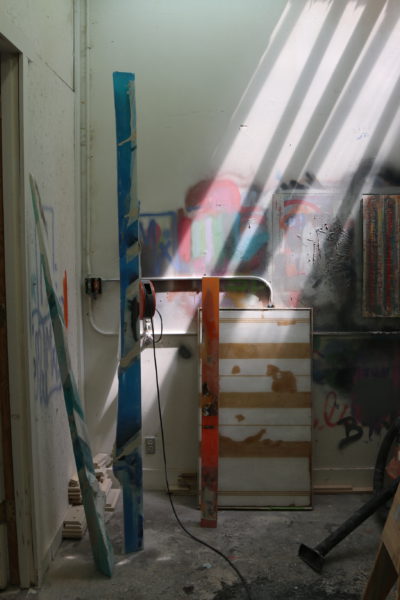 The studio of R. Nelson Parrish

But move in closer and you will see a common thread that runs through Parrish’s work, philosophy and perspective. It is something that connects all of us: time, our shifting perspective of it, and how to capture a story in a single moment.

“If you look at my entire body of work, it can be seen from the lens of expansion and contraction of time,” Parrish says. “I want to create works that people can come at from multiple vantage points. I like the idea of art being inclusive rather than exclusive. You don’t need to know about the post-modern aesthetic or the neoclassicism that’s in my work to appreciate it.”

All of his art is narrative. It is not painting for painting’s sake or sculpture just to celebrate form, though he does not object to such an approach by others. For Parrish, each piece is a moment in a story this third-generation Alaskan feels compelled to tell. His goal is to coax the observer to pause and connect with a feeling or emotion, and to be inspired.

“In all of my work, the subtext is viewer empowerment,” Parrish says. “I’m really more interested in creating a piece of work that allows the viewer to transport themselves somewhere else. There’s no wrong answer.

“Most of my works don’t have an orientation. Just like a record album, there are A-sides and B-sides. Some songs are better than others, but I can’t stop you from dropping beats on your DJ set. It’s yours. Art should be dynamic. It reflects a time period, but great artwork is timeless.”

His “21 Flags” series is a presentation of varied perspectives on the American flag.

“I use the flag as an idea that is inclusive,” Parrish explains. “Each representation of the flag pulls from a part of our history. Our definition of ‘American’ varies and nobody is wrong. When we put it all together, our real strength and power is when we are all unified.”

In some instances, it takes a moment to realize the flag is being depicted because they are abstractions, using paint and sometimes negative space to represent the different iterations and representations of the flag over time. It is a uniquely American artifact with its own mythology and symbolism, celebrated in art, raised or trampled in protest, displayed with pride, brandished in war.

“If you look at the work itself, it’s a reference to time,” Parrish explains. “The pigment sits stagnant. It’s laid down and dries quickly. Scraping causes the stripes. History moves along, events—bits and pieces—solidify to define each era. We only get to see that portion of time that shows through.

“Today, history is moving fast. The stripes themselves are almost like film strips or white noise. So much information is coming it us, it can get muddled, but when we step back, it makes sense.”

Parrish purposely painted the flags on paper to show the tenuous nature of democracy. 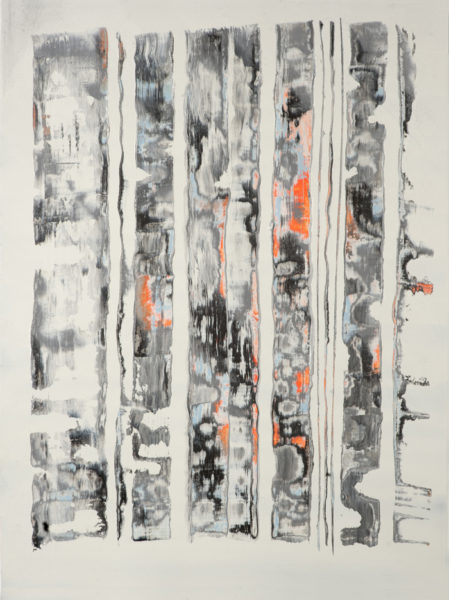 “America is seemingly robust, but democracy is a fragile thing,” he says. “If you twist it the wrong way, it can’t be put back together. Our country, written out in the Constitution, is a concept that was well thought out and we are trying to execute that concept well.

“The ideals of America are both a document and an artifact. The Constitution is a piece of paper under bullet-proof glass. That document means so much to so many people and that meaning is represented and illustrated in so many ways.”

Why 21? Parrish notes that in American culture, the number represents an epistemic shift. It is the winning number in Blackjack, the drinking age, the winning point in a pick-up game and the number of gunshots we use to salute our heroes. It is a number that means something has changed.

When he began the project in 2018, it was in response to seeing our country experiencing a major shift—a tumultuous presidential election, the ubiquity of the iPhone and the pervasiveness of social media.

“It’s referential to myself, as well,” he says. “I’m no longer just a person, I’m now a father. On a macro level, it’s about what is going on with our country. On a micro level, it’s what was going on with me. Families change; people evolve. And there is nothing wrong with that, but things will never be what they used to be. Tomorrow should always be different than yesterday. Time does not allow us to go backward.”

Up ahead, Parrish envisions a new iteration of the “21 Flags” project in 2021, perhaps at regular intervals in the future. He is keeping the details close to the vest, but he says it will be very different.

“I want to create a series that is referential to what is important in our country,” he explains. “What is it people need to see and be reminded of? There is always work that needs to be done.

“I have always wanted to inspire people. I’m a nobody who grew up 12 miles north of America’s northernmost stoplight. If a guy like me can have the slightest positive effect on culture and society, that means anybody can do it. Hopefully these works will be there to say—in the most American sense possible—if you dream big and work hard enough, it can happen.”