The Painted Screen Society of Baltimore 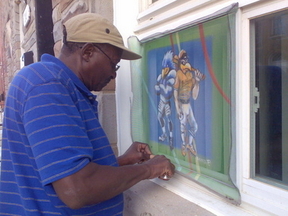 While watching one of my favorite Sunday morning shows (CBS Sunday Morning) accompanied by my morning joe of course, I watched one  of the most intriguing stories. Painted window and door screens. For the fine art connoisseur it doesn’t sound like much but wait… this tradition of painted screens has been going on for over 100 years. The following is directly from the Baltimore Screen Society and it is a wonderful story of urban folk art with function and beauty.

In the summer of 1913, the corner grocer at Collington and Ashland Avenues in the heart of Northeast Baltimore’s Bohemian (Czech) community, was the first place to introduce colorful scenes on woven wire. William Oktavec painted the front doors of his shop with the meat and produce he sold inside.

A neighbor admired his artwork and its practical bonus of preventing passersby from seeing inside his store, while she could see outside. Wishing to maintain privacy in her rowhouse, she asked Oktavec to paint a screen for her front window and presented him with a colorful scene from a calendar. Each of her neighbors demanded their own — for every window and door of the house. Adjacent communities in turn had at least one enterprising painter eager to imitate the new trend, accommodate clamoring residents, and make some easy cash. Artists and dabblers have continued the tradition ever since.

In 1922, Oktavec opened The Art Shop at 2409 East Monument Street where in he sold painted screens by the thousands and taught art classes to neighbors of all ages. This was in addition to his church restoration and retail framing and art supply businesses. One of his students, Johnny Eck assisted three generations of Oktavecs when business was especially brisk. In the heyday of painted screens in the 1940s and ’50s, resourceful men and women plied the streets of Baltimore by foot, by car and from modest storefronts, supplying as many as 100,000 screens to eager homeowners.

Over the years the popularity of painted screens ebbed and flowed. First the World Wars dealt a blow, then air conditioners, then changing demographics and changing definitions of modernity. Today renovation, replacement windows, and the rising costs of custom art work add to the toll. At the same time, a revolution in crafting and entrepreneurship has found an eager audience of artists and admirers to take the art form into the 21st century as its popularity spreads far beyond Baltimore.

If you are interested in watching the featured story that made me a fan and want to visit Baltimore you can find it here: