The British graffiti artist Banksy has done it again… A decaying Packard Plant in Detroit was his canvas this May. But it seems the 1,500 pound painting was removed and exhibited at a local gallery, leading the plant owners to sue. Some sources I’ve seen tell me that the 555 Gallery removed the piece so as to preserve it, while others say they are guilty of theft.

Bioresource Inc.  filed suit this week in Wayne County Circuit Court to regain possession of the mural by the internationally known British graffiti artist. The painting (a boy with a can of red paint and the words “I remember when all this was trees” affixed to an 8-foot tall cinder block wall) was removed by artists of a nonprofit gallery, where it remains on display in southwest Detroit. 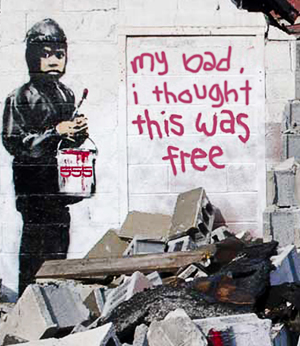 The suit says the mural may be worth $100,000 or more. Stars such as Angelina Jolie have spent more than that on Banksy works. But appraising Banksy graffiti is complicated due to issues of authenticity and the artist’s habit of disavowing works that have been moved from their original setting. Finding a collector willing to buy it or a museum that would accept it as a gift is problematic. Read more about the new graffiti in Detroit in this Metro Times story. 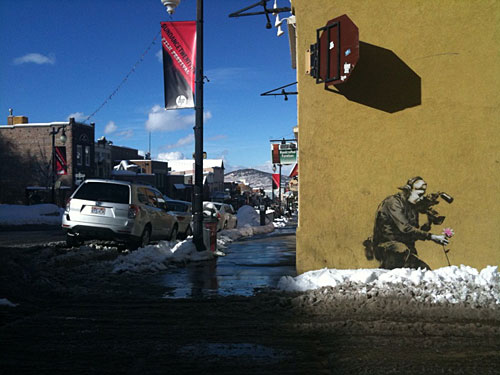 The Egytian Theater here in Park City has had similar troubles. It is assumed that Banksy also tagged our local Main Street Theater and the work of art (a rat wearing 3-d glasses, on a door) was removed and is in storage. How the theater will go about marketing and selling the piece is a controversial issue. Should it remain as is, here in town? Or should a struggling theater program try to reap some monetary rewards from the random tagging? Who does the art belong to, and when does it leave the realm of inspiration and become annoyance?

A slew of graffiti appeared here in town to coincide with the premier of the documentary movie “Exit through the Giftshop,” featuring Banksy (although not revealing his identity).  Read more on our previous blog, here. One piece, on the Java Cow building (seen above) has been covered with ply board, after additional graffiti “artists” decided to leave their own tags.

Park City Municipal removed one of the tags, on a historic building, and it is not known whether they knew the artist and his work or not.