When happy news makes you go nuts… New clews point to why Vincent Van Gogh sliced off his ear in on a winter night, late in December. One of Van Gogh’s paintings, “Still Life: Drawing Board with Onions,” was painted just a few days after Vincent returned to the his home on January 7th, 1889. An envelope depicted in a the painting provides a clue (previously ignored) that could help. The envelope in the painting is addressed to Van Gogh from his brother Theo. Until recently, no one has considered whether the artist was illustrating a specific letter. For art historians, this is a very important milestone!

Reading of his brother’s love affair could well have been the trigger for the Van Gogh’s self-mutilation, although there was probably no one simple explanation for the incident (and Van Gogh had some serious tensions with Gauguin, a fellow painter). Vincent may have feared (wrongly) that he would lose the support of his brother Theo. For years, Theo had providedthe support of money and friendship for the artist. The letter in the painting most likely arrived in Arles on December 23, 1888: the very day Vincent mutilated his ear. The letter almost certainly read that Theo had fallen in love with Johanna (Jo) Bonger. 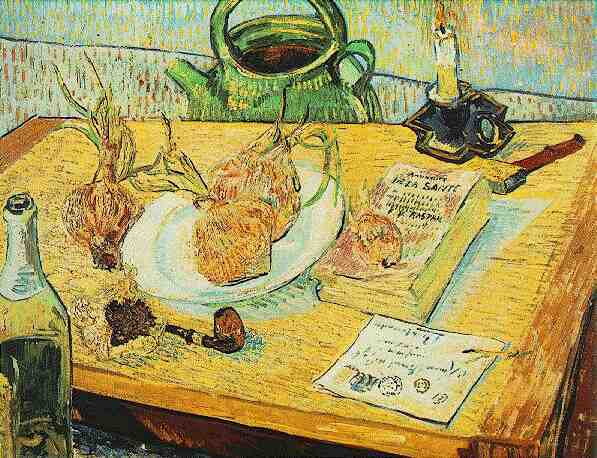 In the still-life, the handwriting on the envelope is clearly Theo’s, and the letter is addressed to Vincent in Arles. Although the postmarks lack a legible date, one contains the number “67”, enclosed in a circle. This was used by the post office in Place des Abbesses, close to Theo’s Montmartre apartment.

The postmark directly over the two postage stamps reads “Jour de l’An” (New Year’s Day). This was spotted by Dutch specialists working on the new edition of Van Gogh’s letters, which was published in October. They concluded that the letter had been posted during “the busy period around New Year” and it had possibly arrived on 23 December, the date Vincent received his 100 francs financial allowance from Theo by post. The letter was probably posted the day before from Paris.

The established view is that Vincent did not learn of Theo’s engagement until after he mutilated his ear, but our research suggests that news of the love affair reached him on 23 December. Theo and Jo had met (for a second time, after a long break) in Paris in mid-December and decided to marry just a few days later. On 21 December Theo wrote to his mother, asking for permission. His brother must surely have been among the next to know.

It seems Vincent already knew of the impending engagement when Theo visited him in hospital on Christmas Day. In a recently published letter, Theo wrote to his fiancée about the brief hospital visit: “When I mentioned you to him he evidently knew who and what I meant and when I asked whether he approved of our plans, he said yes, but that marriage ought not to be regarded as the main object in life.”

On Christmas Day Vincent was suffering from a life-threatening wound and was in considerable mental distress, so it seems unlikely that Theo would have broken the news about his engagement. Although it was briefly discussed, this was presumably because Vincent had already known.

Vincent’s feelings must have been complex, and by January 1889 he may well have become reconciled to the engagement, following reassurances from his brother. The very fact that he included the envelope in the still-life suggests a message of hope.

Although it is speculation, the postmark on the envelope might represent a coded message that the strong links between the two brothers would survive. The Musée de La Poste in Paris told us that although “Jour de l’An” postmarks were widely used in the run-up to Christmas and New Year in the 1880s, most are fairly small marks, rather than the more prominent words inscribed by Van Gogh. This suggests that the personalised postmark may have been Vincent’s way of stressing to Theo that the letter depicted was a very particular one—and that he wished his brother well for the new year.

The painting, on loan from the Kröller-Müller Museum in Otterlo, will form the centrepiece of “The Real Van Gogh: the Artist and his Letters”, opening at London’s Royal Academy on 23 January.