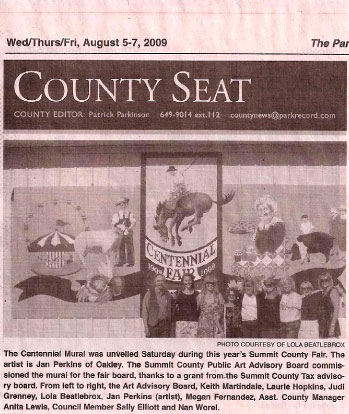 This past weekend, Summit County unveiled an original mural commemorating the fair’s first 100 years, created by Oakley artist Jan Perkins. The mural will hang on the back of the grandstand, located at the entrance of the fairgrounds in Coalville, Utah.

“Jan’s iconic depiction of our rodeo, one of the most popular events at the Summit County Fair, and her excellence in artistic execution won her the commission,” said Brian Bellamy, interim county manager.

Perkins, who graduated from Utah State with a degree in painting, specializes in painting animals with an attention to anatomical detail that gives her subjects a realistic quality. Her strong interest in magazine illustrations from the early 1900s has influenced her design for the mural, which depicts home arts, horticulture, floriculture, livestock and the rodeo. Perkins was chosen to create the mural by a selection committee from the Summit County Fair Board, which reviewed the artistic submissions.